There are four main components to the the Gross Domestic Product number, the Import-Export data, the Gross Private Domestic Investment number, which includes construction data, Personal Consumption Expenditures, and Government spending. The data that is the headline number is the seasonally adjusted annualized data projects four quarters of growth based on one quarter of seasonally adjusted data growth, Seasonal Factors change from month to month and quarter to quarter and year to year for virtually all categories of data. The GDP is similar. This column has written numerous articles on the GDP. This column has written numerous articles on new construction data, retail sales, and the federal budget. Retail sales are up over last year. New Construction is up. Federal Spending is up. How can the GDP not be higher than it is being reported?

Some quarters show regular losses, while others show regular gains, depending upon the data. Real estate tends to wane after June 30th. It is no surprise that new construction slows as it gets colder. The data is seasonally adjusted so one quarter can be compared to the next. Retail sales soar during the fourth quarter as people buy for Christmas and retailers reduce prices to reduce their inventories.  Here the residential and non-residential structures are combined.

The Seasonally Adjusted data shows a serious solid basis for a stronger than reported GDP. Imports are up 5.5%. Exports are up 3.40%. This means that the import export balance is a negative impact on the GDP. New Construction is, and has been, a huge stimulus to the economy.  Imports are exceeding exports here, as well. Imports are pulling down the GDP number. The seasonally adjusted government expenditures data has been reported as a negative to GDP. There is no seasonally adjusted outlay data that is published in any other report than this one, so it is held constant in both tables.

Is Real GDP - Same quarter growth - approaching 4%? The commentators on the GDP have said that consumer spending accounts for 60-70% of GDP. The unadjusted same quarter growth, which during the fourth quarter is the annual rate of growth is either 4.14% or 5.38%, In fact, or should I say in FACT (False Assertion Considered to be True) the quarter to growth is 2.53%. seasonally adjusted. The reality is that it grew at 5.86%. 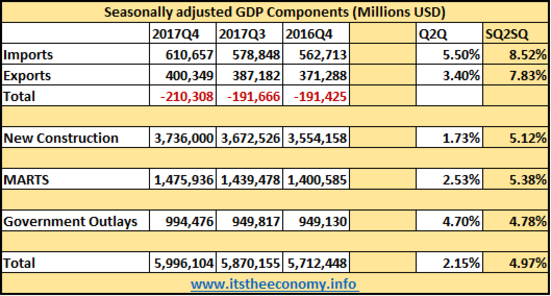 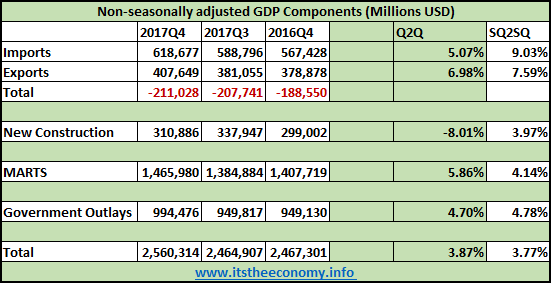