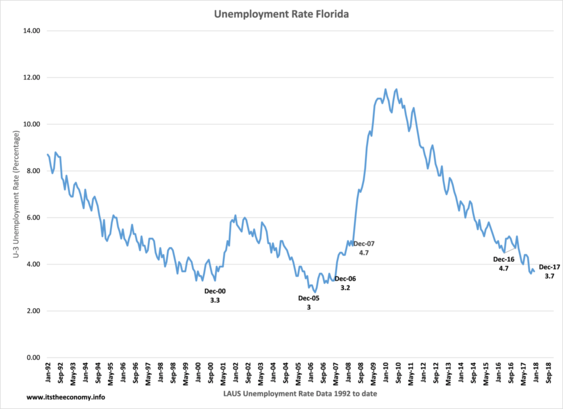 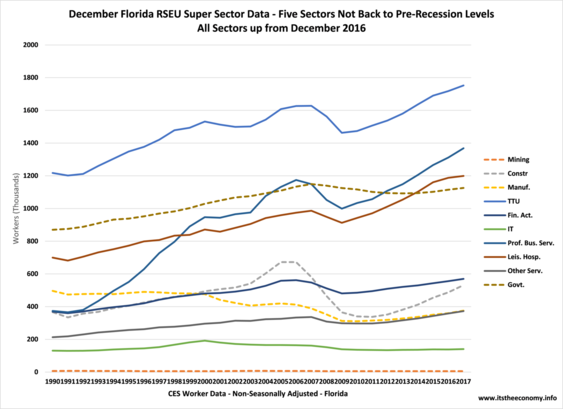 Economic Hurricane in Florida - This is a Good Thing

Just as this column has written articles on the Current Employment Statistics situation with regard to Hurricane Harvey and Texas, this column has written articles on Hurricane Irma and Florida. The super sectors are the same, while the mix of jobs is different. The problem here, as with the Texas data and the national data, is that the Current Employment Statistics (CES) data was revised at the non-seasonally adjusted (NSA) level and the seasonally adjusted (SA) level for 2015, 2016, and 2017 were revised. The data from 2015 was revised lower, while the data for 2016 and 2017 were revised higher with the release of the January CES worker data. The state level information that was released this month was for December. It is important to understand where we are, as well as where we have been, before the data changes. It is also important to note that the hurricanes that hit Florida and Texas were supposed to have negative impacts on the economy. Unemployment was supposed to spike. Retail sales were expected to fall. At least this is what others were postulating. It was proposed here that the hurricanes could stimulate the economy through replacement sales. The two main ways that this stimulation can be measured is in job (worker) creation and unemployment levels. More workers, more income, more spending.  There are many ways to examine the data - month to month, year to year, and all-time levels.

All sectors saw improvement over 2016 levels of workers. This is remarkable. The information technology super sector has been languishing since 2000, at the national level. Mining and logging nationally saw a recovery and a slide during the past eight years. Construction has been lagging since the housing recession. Manufacturing had been "taking it on the chin" until recently. All of these sectors are at or above the levels recorded during 2016. All super sectors are up from the 2015 levels except mining and logging, which was 5800 during December 2015 and 5700 during 2017.

Unemployment Rate is Better than December 2007 through  August 2017. The recent low was hit September of 2017 when it hit 3.6%. It was lower during December 2000 before the recession of 2001 and lower during December 2005 before the housing slowdown that became a recession. Some of this can be attributed to job creation. Some of this can be attributed by a national drop in participation.  If you are not employed and you are able to participate then you are effectively unemployed. There is no "effectively unemployed" insurance.

Any impacts of Hurricane Irma and Harvey have not been long lasting. There are some sectors that are still in recovery mode from the Great Recession. The impact on the Gross Domestic Product should have been fleeting. We will receive the first revision to the fourth quarter GDP this week.  This data can be obtained for any state. Interpreting the data just takes time.