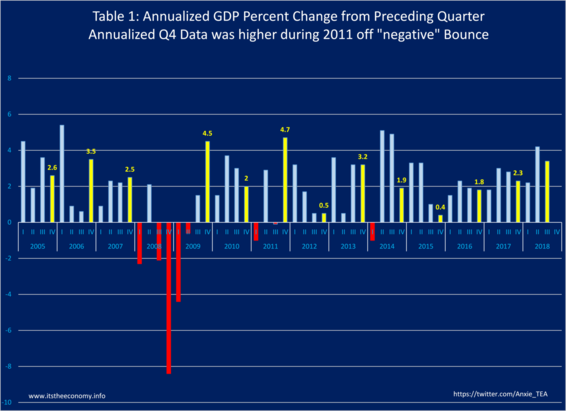 Retail Sales were on a record pace during November. Inflation was over, or around 2.0% each month of the final quarter.  Both will boost Personal Consumption Expenditures (PCE.) New Home Construction was on the path for its best year since 2008.  This could boost Gross Private Domestic Investments (GPDI.) Government Spending was on a record pace, as was  Government Revenue. This should have boosted Government Consumption  Expenditures (GCE.) We appear to be winning the Tariff War with China, which could reduce imports and bolster the Import Export Data.  What was reported in the Advance Fourth Quarter GDP report?

Quarter to Quarter Growth, Annualized GDP, hit 2.6%. Quarter to Quarter growth was expected to drop from the third quarter and still be better than Fourth Quarter of last year. Naysayers will say that this is a drop from third quarter's 3.4% which was a drop from second quarter's 4.2%. The only times since 2005 where the annualized GDP was reported higher was when it came off a lower third quarter value.  The individual components were 2.8% for personal consumption expenditures (PCE,) 4.6% for Gross Private Domestic Investments (GPDI,) 1.6% for exports, 2.7% for imports,  and 0.4% for Government Consumption Expenditures (GCE.) The media estimates of what to expect were lowered to 2.3% for annualized GDP right before the report was released. This was a "solid beat."

It was anticipated that we would see a total annual growth for 2018 of 3.0% or more. The advance final 2018 GDP was 2.9%. This is comparable to 2015 when we also hit 2.9%, after many revisions. It is important to note that the "final" annual GDP for 2015 was reported at 2.4% during the March 2016 Final fourth quarter report. This means, using that published data, that this was the best GDP since 2000 when it hit 4.1%. Readers of this column understand that the data was revised back to 1929 last year making all previous data "obsolete." That being said, President Obama's best year was 2.9%. His 2.9% was a GRP (Gross Revised Product) and not a true GDP.

Gross Private Domestic Investment up back to back quarters. GPDI was up 4.6% Q2Q after being up 15.2% the prior quarter, and compared to only 0.8% during 2017Q4.  Same quarter growth was up 7.0% after being up 6.1% last quarter and 5.0% during 2017Q4. The investment into the economy means that this expansion should have more "legs" and that we have not "hit the wall" as of yet. The economy is a marathon, not a sprint. 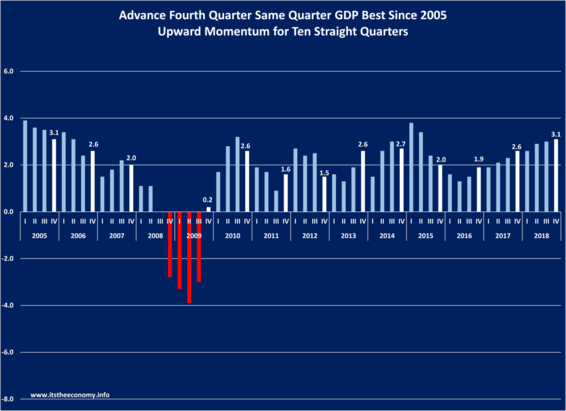