The weekly unemployment claims report used to be headline news at the bottom of the eight o'clock hour during the Obama Administration. Would the seasonally adjusted (SA) first-time claims (FTU) level drop below 500,000 or 400,000 or 300,000? The current under 300,000 SA FTU streak began on March 17, 2015. Technically this isn't the anniversary of the streak because it is only the 5th of March. We have had two elections and two leap years in the meantime. They stopped mentioning the "streak" after the 2016 Presidential Election. They rarely acknowledge the continuing claims data. They have "never" commented on the Insured Unemployment Rate (IUR.) What was recorded this week? Nothing was reported because we have the continuing Coronavirus situation in China. Here is the report. What does it mean?

Non-Seasonally Adjusted First-time Claims were recorded at 200,159  This is a drop uptick from last week's level of 216,982. It is alsocomparableto where we were during the past two years. The February 29th data point limits the comparable data for the low cycles of non-seasonally adjusted FTU. The first-time claims issuance rate (FIR) is at an all-time low for the first week of March.

The Seasonally Adjusted First-time Claims Streak has now been "reported" under 300,000 for the 261st consecutive week. This stopped being reported around week 98, after the 2016 election. Will this streak be reported when we hit the 5 year anniversary (March 17?) Nah, they will probably still be hungover from St. Patrick's Day.  The SA FTU could have been reported under 200,000 claims. It was reported at 211,000 claims, if they reported it at all.

The seasonally adjusted continuing claims level is under the 2.0 million mark for the 151st consecutive week.   Will this data be reported when we hit the three year anniversary of this streak (April 1?) Nah. Why do that? They will still probably be discussing the Coronavirus.

Right now all three ingredients are in place for President Trump to be re-elected. Seasonally adjusted First-time Unemployment Claims are under 300,000. Heck, they are almost under 200,000 claims. The unemployment rate is not only under 8%, it is under 7%, under 6%, under 5% and under 4%. Gasoline in Ohio is right around the $2.25 level. There is even a station nearby at $2.009 a gallon.

Are the Unemployment claims data, plural, too good to be true? Are they too good to be reported?   Ignore the weekly claims data at your own risk. The trends are still our friend. Last year we set a record for weeks with the NSA FTU claims being recorded under 200,000 claims with 23 weeks. We almost had our second week this year this week. Last year we tied a record low of 0.95%. Last year we had a low of 1.369 million continuing claims, comparable to the 1.350 million during October of 2018, with 2 million more covered insured.The earliest that we have had an NSA FTU recorded under 200,000 was February 24, 2018. Last year, during the month of April, we had two weeks with SA FTU under 200,000 claims,  What can we expect? Expect the Legacy Media to actively ignore the good news and focus on the Wuhan Virus as long as they can. They need their Black Swan. 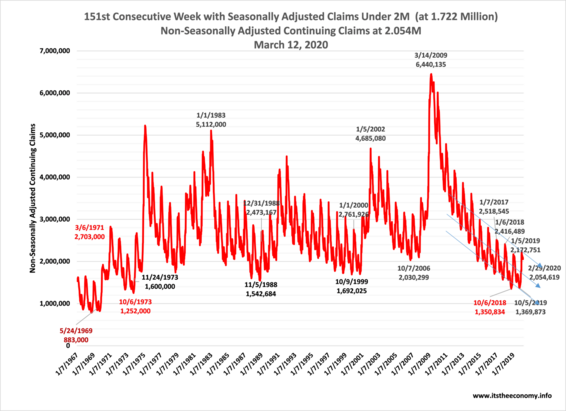 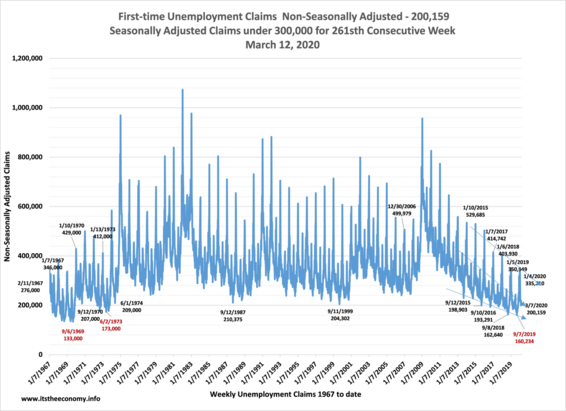