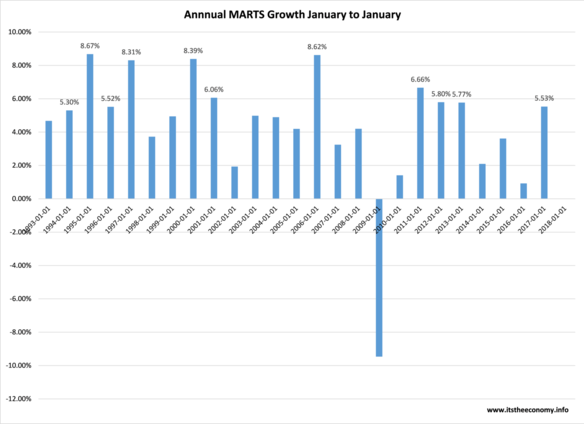 Will 2018 Be a 6 Trillion Dollar Retail Sales Year?

This past year, with the release of the Advance December MARTS Retail report we saw that we had a 5.7 trillion dollar sales year - the best year ever. This good news was lost by the media. Last year we saw regular annual growth over 4% and we saw annual growth over 7% for November and December.  If we see a growth  of 5.3% we will hit $6 trillion this year. What can we expect from the January Advance MARTS report this week?

Motor Vehicles, Food, and Drink lead the way.  We saw a synchronous drop in gasoline price and Motor Vehicle and parts sales during the Great Recession. We also saw both of them rebound fairly quickly. Food and Beverage Stores as well as Food and Drinking Places. General Merchandise Sales also are fueling the retail market.

Appliances and Electronics, Hobby Sales, and Furniture and Home Furnishings are at the other extreme. These areas of retail are linked to the real estate market, especially furniture and Appliances. Only electronics and appliances, in this grouping, is experiencing sales at a lower level than they saw pre-recession.

All of the Non seasonally adjusted data declines from December to January. That is what happens after Christmas. If that table were published her is would be all red.

What to watch. Watch the Non-Store Retail sale data, as well as the Building Material sector, the Food and Beverage Store data, and the Health and Personal Care sale data. We had a record retail year last year with weak motor vehicle data during January and weak Hobby data. Clothing sales will almost certainly be lower than last January. The same can be said regarding Electronics and Appliances. Watch the data and the revisions. November's final data and December's preliminary data could both be revised higher. 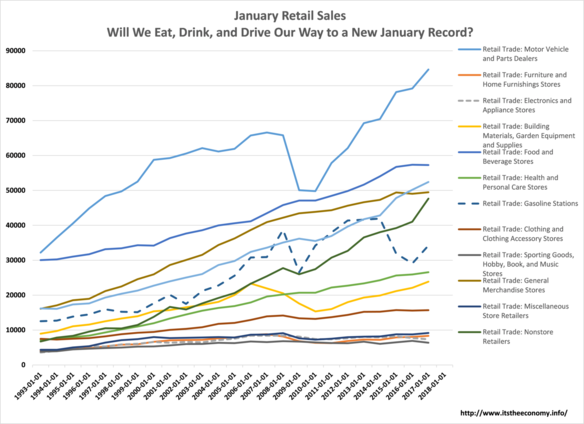