October Trick or Treat from ADP?

The ADP Payroll report for October will be released on Halloween. Is it going to be a trick or a treat? This year there was a massive revision to the payroll data performed that impacted the growth rate from 2015, 2016, and 2017. The ADP payroll had been growing at a rate of over 2.00%, seasonally adjusted. The data went from a faster growth rate to a slower growth rate. These revisions were performed after there were massive revisions to the Current Employment Statistics data between the release of the December Jobs Report and the January Jobs Report. The data has remained strong even after all the revisions. There are a number of ways to examine the data. We can look at month to month growth. We can look at October to October growth. We can look at the whole market and individual sectors. It is important to understand that the ADP data is all seasonally adjusted. It is also important to understand that it is all private sector payroll. The headline "jobs" number is the seasonally adjusted non-farm payroll Current Employment Statistics (CES)  data, which include government jobs. The ADP data more closely resembles the Private Sector CES data. What can we expect from the October ADP payroll data.

The Annual rate of growth can either improve or slow compared to September. Some months the tendency is to decline month to month, and other months the tendency is to grow month to month.Normally we see growth over 2% during October and last month we recorded growth of 1.96% for September to September. The trend is upward, even with the revisions to the data. The indication from recent reports regarding accelerated hiring for the Christmas Season indicates that we should see growth over 1.96% If we grow at a rate comparable to October during 2012-2016  the ADP Payroll report could report a growth over 250,000 or 350,000, or 450,000 or 550,000 jobs. Expect a number between 215,000 and 235,000. Do not be surprised by a High 200,000 low 300,000 number based on annual growth. Also expect all sectors to add to their payroll except possibly Information Technology. The largest growth should be in Construction, Manufacturing, Professional Business Services, and Education/Health Services.

The data indicated that this month could be a trick, with 164,000 to 192,000 jobs added, or a treat with 250,000 to 300,000  jobs added. This report will prepare the "experts" for good news or not so good news. Will the report "get political" and not produce a solid number right before the mid-term elections the following week? Will this report give President Trump another victory.  All the data points to a value over 200,000 and less than 300,000 with an overlap in the 230,000 to 250,000 level, assuming that upward revisions to prior months data do not borrow growth from this month. 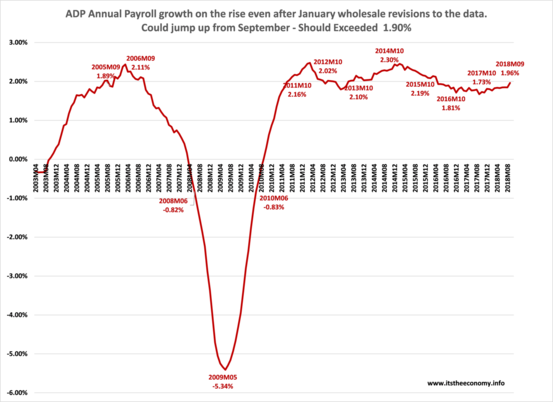 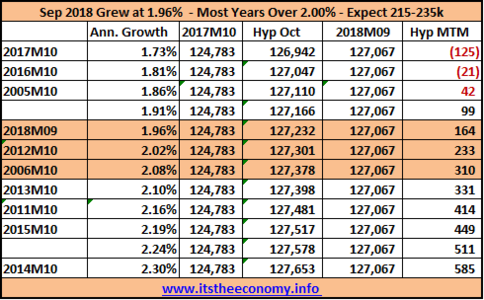 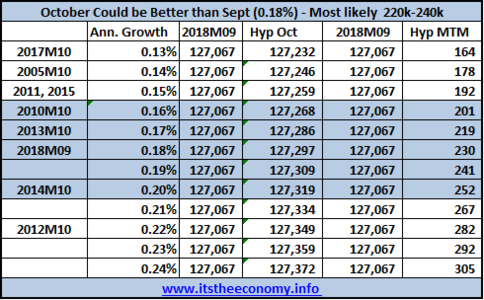 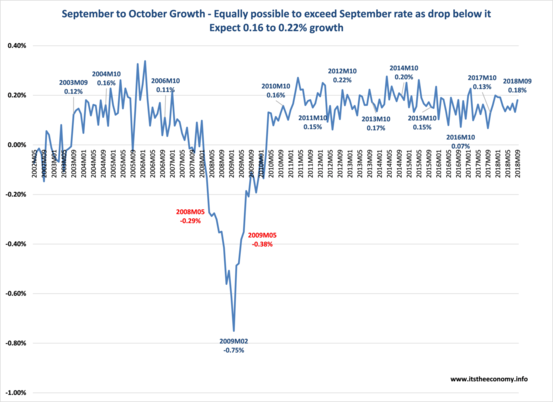