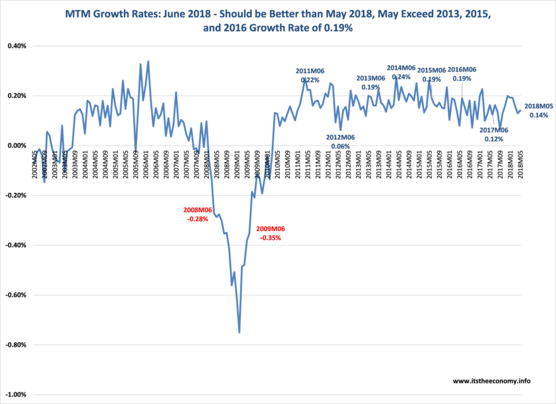 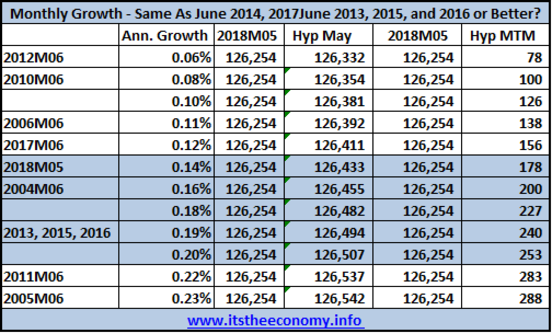 ADP Payroll to be Released this Thursday - Pointing Much Higher

The ADP Payroll Report is normally released the Wednesday prior to the jobs report. This Wednesday s the Fourth of July Holiday, this means that the report will be released Thursday. The ADP Payroll report measures jobs, private sector jobs, created. The headline "jobs number" is often reported as non-farm payroll workers added to the economy (Current Employment Statistics.) The difference between the total private sector data and the CES non-farm payroll (NFP)  number is the amount of government workers created. Friday's report will also measure the workforce population, the number of full-time jobs, the number of part-time jobs and the number of unemployed workers through the Current Population Survey (CPS) data. The three surveys are similar. The three surveys are not identical. We had been experiencing solid ADP growth until the February Payroll Report. There were revisions made to the seasonally adjusted ADP data after the January Employment Situation Report (Jobs Report) was released.  The January Jobs Report shifted growth from January back to 2016 and 2017. The ADP revisions did a similar thing. Remember that the January ADP report was released prior to the January Jobs Report with the massive revisions. The February ADP report was playing catch-up. The shifting of data from 2018 back to 2016 and 2017 changed the trend of the rolling year growth rate from a growing economy to a slowing economy. The month to month growth rate and the rolling year annual growth rate are used by this column to project potential ranges for month to month and annual growth in jobs. What is expected this month? Revisions and Growth. Remember that all of the ADP is seasonally adjusted.

Last Month we grew faster than we did during June 2017. Even with all the revisions to the data, the boosting of the number of payroll jobs, growth has been trending higher since June of last year. Normally the growth rate, annually, is over 2,00% during June.  If we grew at the same rate as we did last June then the month to month growth would be a weak 105,000 private sector jobs. If we grow at the same rate as we did last month then we would add a modest 156,000 jobs. If we grow at the rate we did during June 2016, just two years ago, we could hit 311,000 jobs added during June.  Expect a number between 221,000 and 380,000 based on annual growth. This is a huge range of potential jobs. 0.03% means 40,000 more jobs. If we increase the growth rate by 0.04% then we see over 50,000 jobs added. We know from last week's Weekly Unemployment Claims data that continuing. June is normally where we see jobs (CPS) creation, worker additions (CES,) and unemployment rise as people say that there are seeking jobs and unable to find them. (More on this with the Employment Situation Forecast article.)

Annual Growth should happen for all ADP Sectors. We should see substantial growth, in percentage terms, in the construction sector, the mining/logging sector (Natural Resources,) the Professional and Business Service sector. and the Education and Health Service sector. The Information Sector saw a minor drop during June of 2017 from the June 2016 level, and it is a sector than perennially shows weakness. There could be no growth or a slight decrease in the IT sector this month. It is more likely that it will rise.

The month to month growth rate varies wildly. The trend here was also impacted by the revisions. The May 2018 monthly growth rate was greater than the June 2017 growth rate. The May growth rate was 0.14%. We have seen 0.19% during June 2013, June 2015, and June 2016. If we grow at 0.14% then we should add 178,000 jobs. If we grow at 0.19% we could add 244,000 jobs.  we rarely grow by more than 0.19% during June. There is some concern that we are at "full-employment." This column has written numerous article on the effective unemployment rate, U-7, that sees the participation rate impacting the unemployment rate. Are we at full-employment without having comparable participation to the prior times when unemployment was under 4% or 5%? The U-7 data measure "missing participants." These missing participants may jump back into the job market this Summer.  The month to month growth rate curbs some of the enthusiasm of the June to June growth potential. Expect a number between 178,000 and 240,000.

The Month to Month growth data indicates that all sectors should add workers. Once again, anticipate weak growth in the Information Sector. It is possible that the information sector could see a drop in payroll.  The month to month data indicates the largest percentage growth, Once again, we can expect the largest growth in Construction, Natural Resources, and Professional Business Services..

The ADP data is just one survey. The Weekly claims data is another survey. The Current Population Survey data on full-time jobs and part-time jobs is actively ignored. The unemployment data and participation data gets the most attention. The Current Employment Statistics data will get the most attention. The problem is that this data measures workers while the ADP and CPS data measures jobs. The ADP data and CES data will be revised from last month. If the data from last month is revised higher from the advance value that will "borrow growth" from June. Last month the ADP value was reported at 178,000 jobs added. We don't know what seasonal factors they used to convert the recorded non-seasonally adjusted data to the reported seasonally adjusted data. Did we really hit peak hiring during December 2017, January 2018 and February 2018? No. We have seen the CPS data surge this year. If we saw 250,000 jobs added as compared to the May ADP Level, and the May level is revised up to 198,000, then this month will be reported at 225,000 jobs added, either way 428,000 jobs would have been added over the past two month. The revisions change the headline number. Watch the revisions. Watch the month to month growth rate. Watch the annual growth rate. Watch the individual sector growth rates. 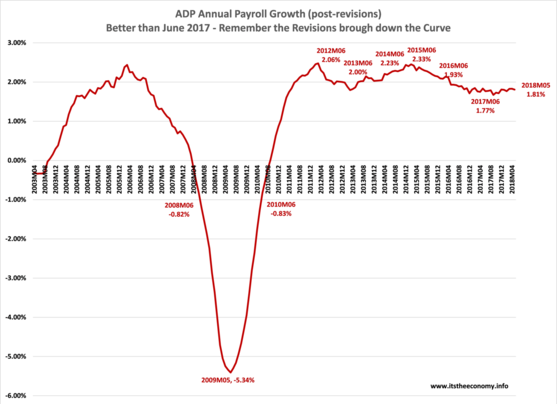 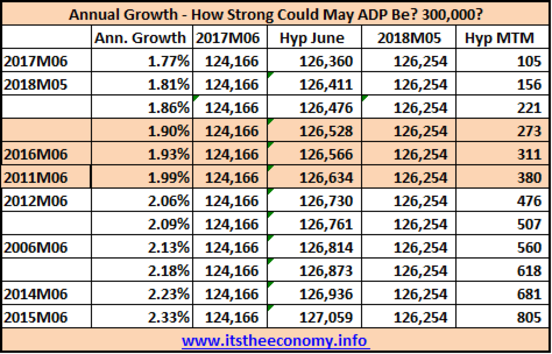