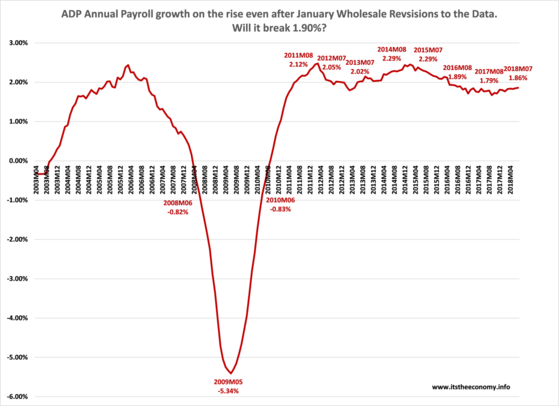 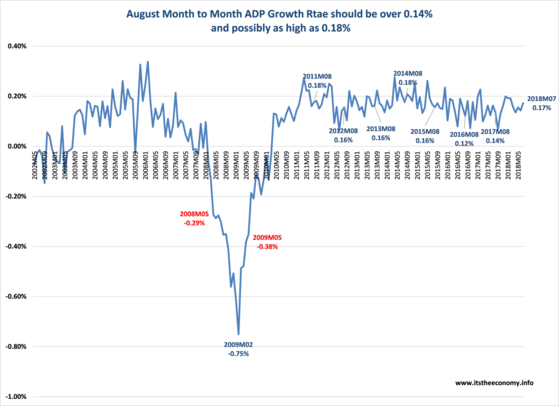 The Employment Situation Report Forecast Article for August projected that based on month to month changes we could anticipate 218,000 to 271,000 seasonally adjusted workers added to the economy, with possible decreases in the Trade, Transportation, and Utility (TTU) sector and the Information Technology (IT) sector. The Rolling Year growth rate projected a growth rate of 170,000 to 271,0000 SA private sector it being reported that workers were added with all sectors compared to last August's values, plural. The overlap is between 218,000 and 271,000. It was projected that we should expect 255,000 SA CES workers added, prior to upward revisions for July. If the revisions were 30,000 that would "borrow 30,000 workers" from August and reduce this month's total to roughly 225,000. There is no unemployment component or participation component to the ADP data. What can we expect from the ADP Data?

Expect month to month growth of 0.16% to 0.19% this month. Last month we had a monthly growth of 0.17%. We have had 0.18% growth during August twice and 0.16% growth during August three times.  We are on an upward climb, up from 0.14% last August. It is possible, not probable, that we could grow at a monthly rate greater than 0.20%.  That hasn't happened during August since, and including, 2003. The month to month growth projects 199,000 to 239,000 payroll jobs added to the economy, ore-revisions to the prior data. It also projects growth in all sectors except possibly construction.  TTU and manufacturing should grow, could slow or slightly contract. The ADP and CES data agree on the possible contraction in TTU workers.  There has been some concern over a lack of trucking job applicants reported in the news lately.

Expect August to August Growth in all sectors. The rolling year growth was trending much higher than it is now prior to the revisions to the ADP data. The trend in the rolling year data is still generally higher than it was during August of 2017. If we grow between 1.87%, as we did during July, and 1.97% we could see the addition of 200,000 to 312,000 payroll positions. All sectors should be higher than they were last August. It is possible for a minor contraction in Natural Resource (the equivalent of Mining and Logging in the CES data,) and possibly weakness in the IT sector. Here, TTU should improve over last August.

The data indicates that we should see 200,000 to 240,000 payroll positions added during August, before upward revisions to the July data. Expect a value of 220,000 to be reported. Remember that this number does not include government jobs and that we are expecting a sizable jump in government jobs. The ADP number is trending lower than the anticipated private sector CES worker number. It should also be reported considerably lower than the NFP CES number.