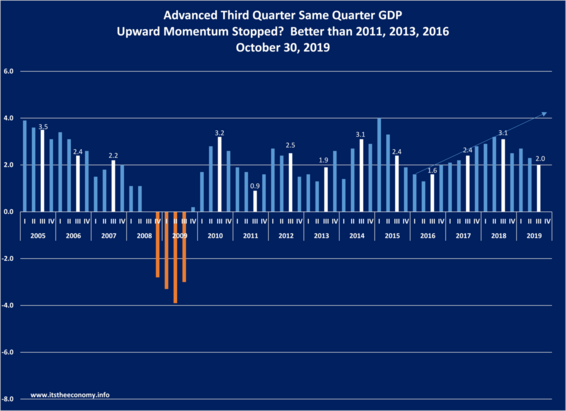 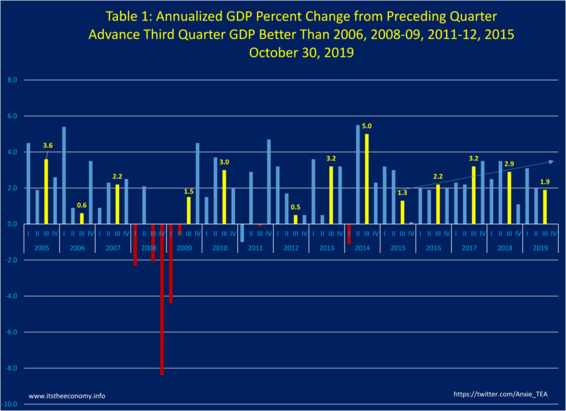 This Quarter the Third Quarter GDP was better than some, slower than others

This year we have seen some media hysteria about a potential recession during the next two years. This column produced the article "Will this be the first media created recession" August 10th of this year. The annual revisions to the GDP data with the release of the Advance Second Quarter GDP report pushed some growth from the Trump Era to the Obama Era. The Details can be found in "Second Quarter GDP Data and Revisions: Some Surprises." We have had record setting retail sales and strong New Home Construction and New Home Sales this year. Would that translate to solid third quarter GDP growth?

The Headline Annualized Third Quarter GDP was reported at 1.9%. The "consensus" or "whisper" number was 1.5%. There are four main components to the calculation of GDP:

Last quarter the drop in GPDI created some consternation.  If you examine the Table 1 data you will find that the second and third quarter of 2016 showed steeper declines in GPDI. The increase in government consumption offset the declines in Net Exports and GDPI. You will also notice that Third Quarter GDP was negative during 2008 and 2011. The third quarter during 2009 was 1.5%, 1.3% during 2015,  0.5%. during 2012.

Same Quarter GDP declined to 2.0%. We had had eleven straight quarters of equal or better same quarter GDP prior to the 2019Q2 revisions. Same quarter GDP has been 2.0% or higher since 201Q3.

The takeaway from the same quarter data is that at least three of the four major components rose during the third quarter even after the media had been talking recession since November of 2016.

It appears that the impacts of the "Schumer Shutdown" last Christmas had long lasting impacts. New home starts, new home sales, and existing home sales appear to have been delayed due to a slower loan approval process caused by the shutdown. We are now on track for our best new home starts year since 2007, as well as our best new home sales year since 2007. Retail sales grew at a slower rate this year than last year through June. Things have accelerated since that time. We are on track for at least 3.5% growth this year, with same month growing 4% and 5% recently. Wages are rising. We have a record level of September full-time workers. This should boost fourth quarter GDP.