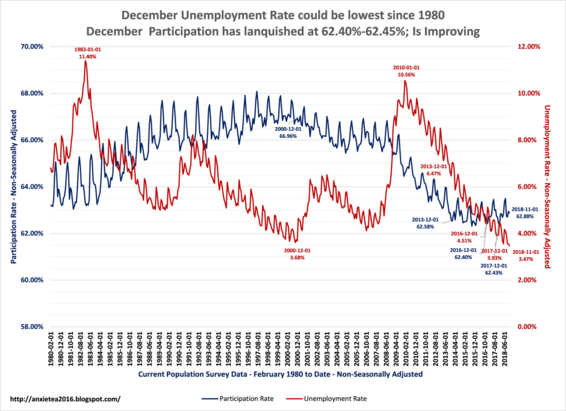 Are Older Workers Pulling Down the Participation rate or

are Young Workers to Blame?

There has been considerable attention paid to the declining participation rate during the Obama Administration. It was proposed that this was due to a growing older worker population and retiring Baby Boomers? This article is a continuation of the "Red, Gay, and Blue Workforce" Series.

The Number of Jobs Worked was at an All-time High for December. This was not always the situation during the Great Recession/Recovery. The Total December Jobs data, non-seasonally adjusted (NSA) Current Population Survey (CPS) data, reveals that there were fewer jobs during December 2013 than we had during December 2006 and 2007. It also reveals that we had a December record of NSA CPS jobs for 20-39 year olds and for those 55 years of age and older. Our workforce is graying.

We have an elevated level of unemployed workers over the age of 55. The same NSA CPS data that revealed the combined full-time and part-time job data records also revealed a  unemployment problem for those 55 years of age and older. There are more people over the age of 55 who are unemployed now than we had unemployed in those age groups during December 2007.

There are many ways to examine the jobs and worker data. Wages. Sectors, Full-time and part-time jobs. Workers. Unemployed workers. Older workers. Younger workers. They all matter.