There have been endless columns written regarding the Amazon Economy. Just as Wal-Mart revolutionized Retail sales, and just as Federal Express revolutionized delivery, Amazon has revolutionized on-line sales. This column has written numerous articles regarding the "War on (Wo)men" as the jobs growth pertains to men versus women since the Great Recession. The "War on Women" was brought to the forefront during the 2012 election when Mitt Romney said that he had "bindersful of women" candidates for jobs. Pay inequality has been touted for decades. Now we are in an Amazonian Recovery.  The women of the Amazon weer powerful and aggressive. The recovery of jobs and the expansion of jobs for women has been Amazonian in scale. There were Amazonian women long before there was Amazon.

Women Lost Roughly 3.8 Million full-time jobs at the depth of their recession. It was during January, February and March of 2010 that women saw the worst of the recession. They recovered all of their lost full-time jobs by February of 2015 and "never looked back. There are now 3.450 million more women working full-time jobs than were working full-time jobs at the peak of the pre-recession job market during July 2007. There are also an additional 1.7 million women working part-time jobs. The problem is that 12.5 million women have joined the workforce and just over 5 million jobs have been created for them. More workers than jobs means that the workforce participation rate for women has declined since the recession.

Full-time versus Part-time. Both men and women are working more full-time jobs and more part-time jobs than they were during November of 2006. November 2006 is important because it was the November with the official non-seasonally adjusted U-3 unemployment rate closest to November 2017.  What is important to understand is that women work roughly twice as many part-time jobs right now than men do, 17.9 million versus 9.7 million. Men, conversely, work 50% more full-time jobs than women, with men working 71.7 million full-time jobs to 54.9 million for women. Men also have a higher level of unemployment than women with 3.4 million men being unemployed compared to 2.9 million women.

The Jobs market is improving and expanding. We have seen the number of full-time jobs at their highest for the months of July, August, September, October and November. The number of jobs has declined a little since July. This is normal. This is why the government uses seasonally adjusted data. Men and women are both looking for work. Women have seen the largest growth in total jobs and full-time jobs. Men have seen the largest addition of part-time jobs. This has been a part-time recovery for men.  The sector data has shown for months that the Manufacturing Sector, the Construction Sector, and the Mining and Logging Sector have struggled to recover or expand from the recession.These are male dominated industries.  The good news that was reported with the release of the jobs report was that 30,000 seasonally adjusted manufacturing jobs were added during November. What will the non-seasonally adjusted data tell us? That is more another column. The economy will be healthier as more jobs are created for men and women alike. 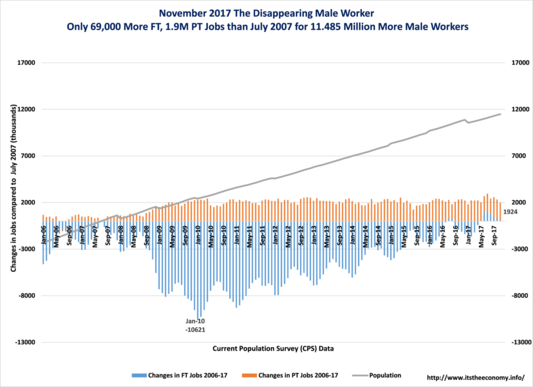 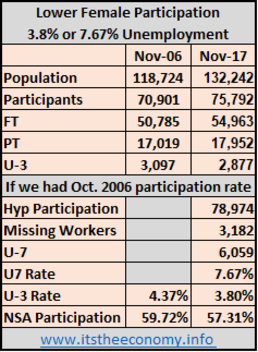 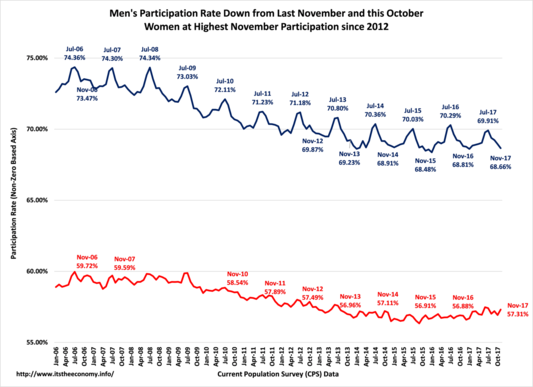 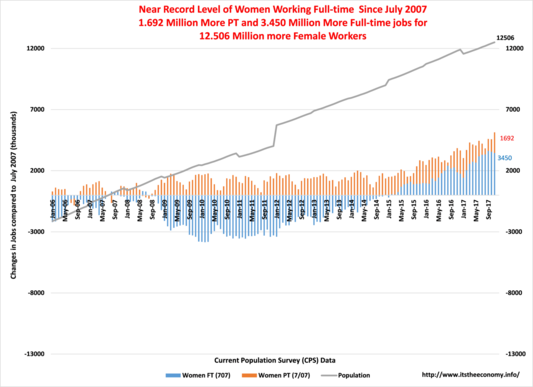 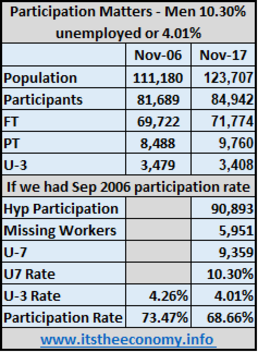