First-time claims trend lower through the end of September  It was projected that we should have recorded a jump of 3% to 6% in NSA FTU Claims this week.  That would have pushed the NSA FTU to between 185,000 and 190,000 claims. THe seasonal factors of 86.2 meant that the SA FTU could have been reported between 213,000 and 219,000, The lowest ever NSA FTU claims data for the first week of August would not have been the lowest SA FTU Claims. What was recorded and what was reported this week?

There is no question. The non-seasonally adjusted first-time unemployment claims number was recorded under 200,000 claims for the ninth time this year. The seasonally adjusted first-time claims number was reported at 213,000. This is the lowest SA FTU claim for the first week of August ever. Ever being since 1967. The lowest that had been recorded this week of August was 211,924 just last August. This year we have nearly 142 million covered insured. The lowest covered insured that we have record during August was August 1971 with 52.8 million covered insured.

The seasonally adjusted first time claims was not only reported under 300,000, it could have been reported under 170,000 claims. We had the SA FTU claims reported at 206,000 and 196,000 claims during the first week of August during 1968 and 1969, respectively. If we used the same seasonal factors that calculated the SA FTU back then and applied it to this week's data then we would ave had a reported value of either 161,000 or 162,000 claims.

The Continuing Claims data was recorded at 1.724 Million - 2.0 Million is normally considered good. If the media covers the continuing claims data data it is with regard to the Current Population Survey (CPS) U-3 unemployment data. The data is from two different surveys that measure two different things. The U-3 number represents those people out of work who are looking for work. The continuing claims data measures those who had been working, lost their job, and are actively looking for work. How low can the NSA CC value fall? Will it fall under 1.6 million, again, this year? We have 215,000 fewer continuing claims this week than we had last year at this time. Last year we hit a low of 1.566 million NSA CC. Could we drop to 1.35 million? Will anybody cover the day if and when that happens?

The seasonally adjusted data could have been reported a little lower. If we used the CC seasonal factor from the past two years we could have had a "headline" number of 1.745 million or 1.751 million SA CC claims. The continuing claims data has not been an obsession of the media. This is different from the JOLTS separations data and is different from the U-3 data.

We are playing Unemployment Limbo. How low can we go? Last year we had a spike in unemployment claims during October because of Hurricane Harvey and Hurricane Irma. This year we are see Sahara Dust in the atmosphere. This is dampening the opportunity for hurricanes to form in the Atlantic. The dust has even been encroaching on the Gulf.  The economy is rolling. Jobs are up. Retail sales are up. Unemployment should continue falling through September for first-time claims and through the first week of October.This is a virtuous cycle. 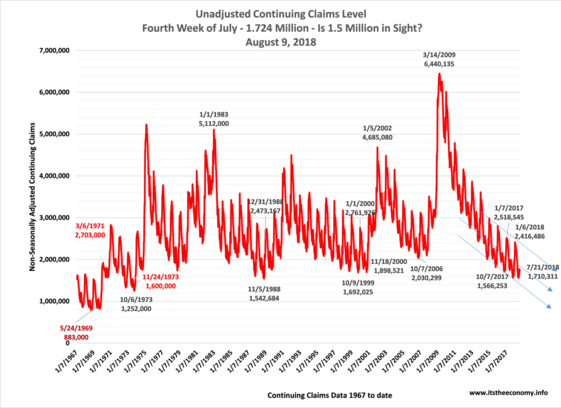 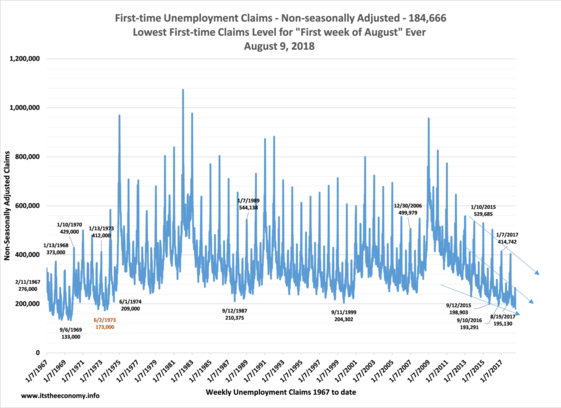 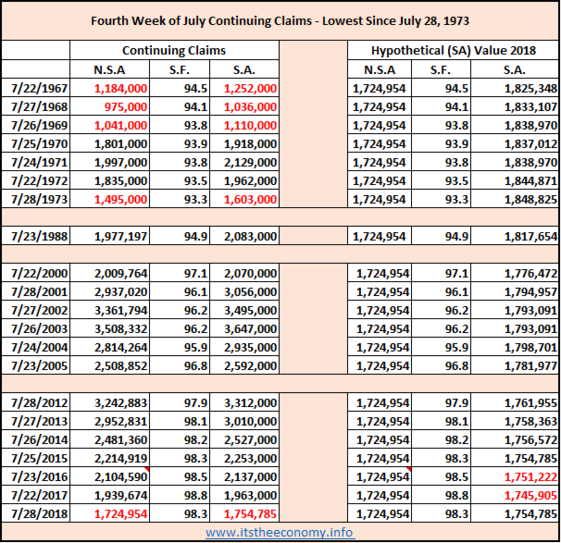 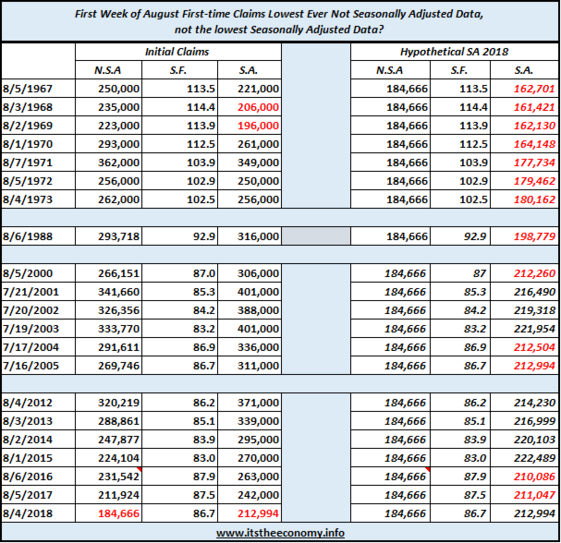