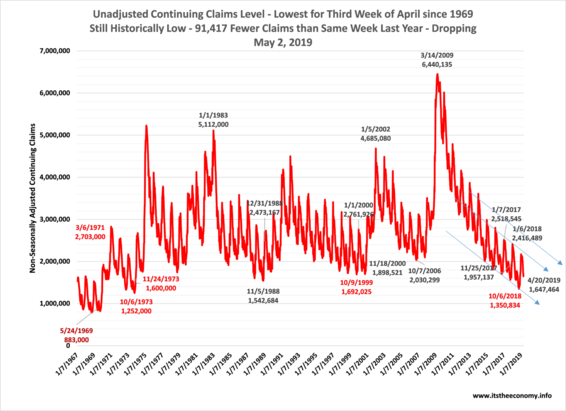 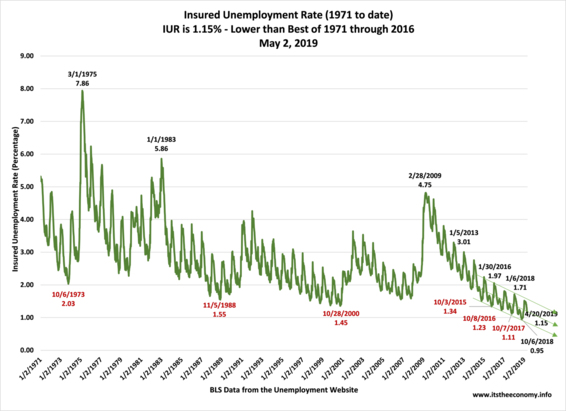 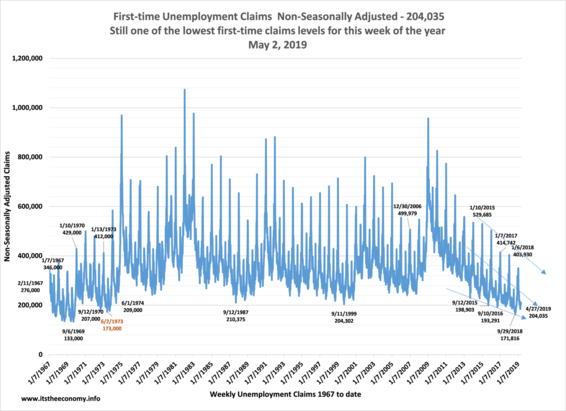 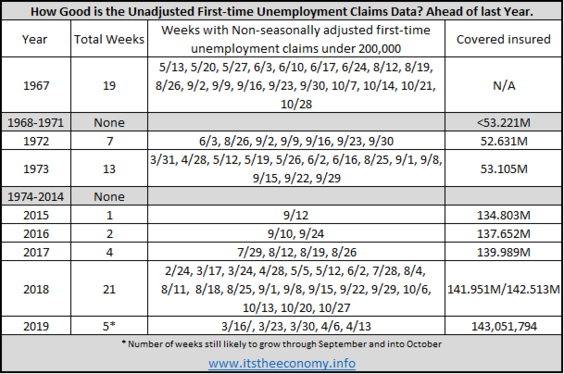 First-time claims recorded a drop, Reported no change in claims

Continuing claims recorded a drop, Reported an increase in claims

Last week there was a slight uptick in the non-seasonally adjusted (NSA) and the seasonally adjusted (SA) first-time unemployment (FTU) claims data. This was not expected and was not unusual. There can be weekly variations in an overall trend. The NSA FTU and the NSA Continuing Claims Data are expected to fall through May and June before an uptick during the first week of July. What was reported SA and what was recorded NSA this week?

The Non-Seasonally Adjusted First time claims data dropped from 211,794 to 204,035 claims. This drop of 3.67% was not quite enough for the NSA FTU level to drop below 200,000 claims this week. If you compare this year's fourth week of April data with the data from prior years you will find:

The Seasonally Adjusted First-time Claims Data was unchanged from 230,000 first-time claims. Unchanged. A drop of 7,000 claims had no impact on the seasonally adjusted data because the seasonal factors changed week to week. This continues the at or under 300,000 claims streak that started March 7, 2015. Readers of this column know that this FACT is a false assertion considered to be true. It is an economic urban legend.

The Non-seasonally Adjusted Continuing Claims data dropped from 1.703 million to 1.647 million claims. This is a drop of 56,000 claims from last week's NSA CC level. This is 91,417 claims lower than the same week last year. This still places us on track to drop to 1.250 million claims by the first week of October.

The Seasonally Adjusted Continuing Claims Data rose from 1.654 million claims to 1.671 million claims. Sometimes down is up in government math. If you compare this with prior years, this is  could have been reported as low as 1.521 million SA CC.

We had fewer continuing claims reported, for 87 million more covered insured, compared to the third week of April 1970 and 1973, and it was reported as being more seasonally adjusted continuing claims. Government Math.

What does this mean to you? The economy is continuing to grow. More people are employed. Fewer people are unemployed. If you are hiring then you may have trouble hiring people and you may have to pay more for them to shift companies or to get off the couch. The continuing slide in continuing claims should mean that the official U-3 unemployment level should drop when the April Jobs Report is released tomorrow. It is dangerous to compare to surveys with different margins of errors, different sample sizes, measuring different things. This was explained in the April Jobs Report Forecast article. Individual weekly data may seem worse than prior years until you factor in the size of the workforce.