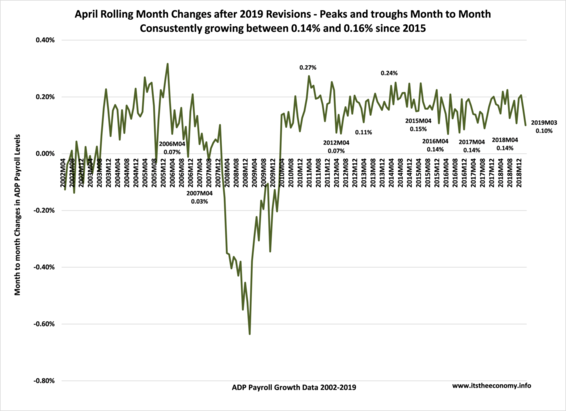 The ADP Payroll report provides some insight as to what we might expect when the monthly Employment Situation report, or Jobs Report, is released by the federal government two days later. The growth rates change dramatically month to month. Overall annual job growth has been strengthening. What can we expect from the April ADP Payroll Report.

All sectors should add to their payrolls, month to month, this April. The largest growth, in percentage terms, are Natural Resources (Mining/Logging,) Construction, Education and Health Services (EHD,) Professional Business Services (PBS) and Leisure and Hospitality (LAH.) Education and Health services, PBS, and LAH are three of the largest sectors, meaning that the March to April gains could lean towards the high side.

All sectors should record annual growth, even Information. The largest growth rates should be in Natural Resources, Construction, PBS, EHS and Manufacturing. LAH comes in at 6th place for percentage growth. IT is one of the sectors that could grow month to month and not grow annually, depending upon the month of the year. This sector has grown April to April since 2011.

This ADP payroll report may receive considerable attention. We should see all sectors grow month to month and April to April. We have been growing over 2.00% and we should continue growing at over 2.00% a year. This means that we could see strong private sector growth reported this Friday in the Government data. 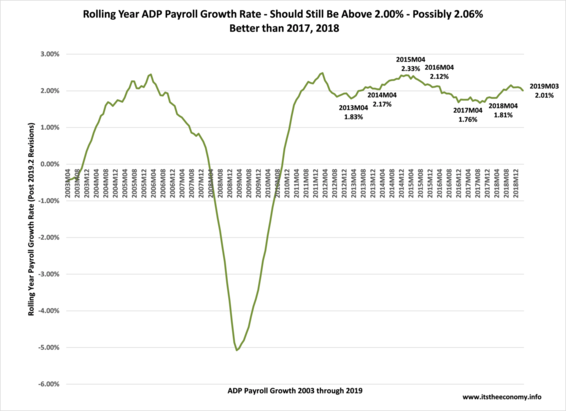