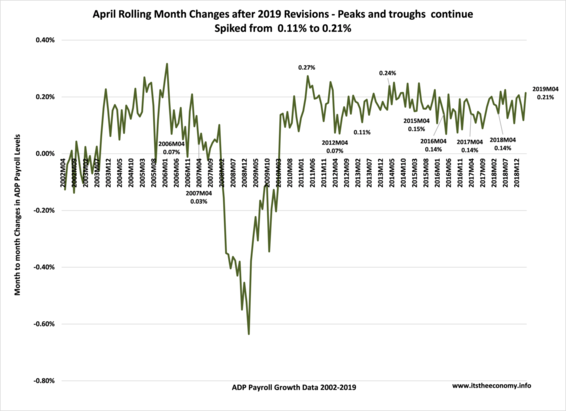 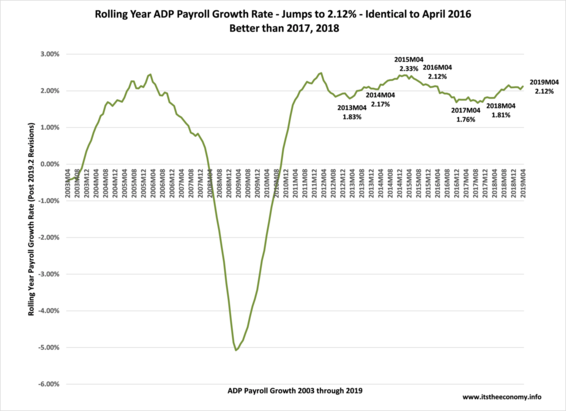 The ADP data has been peaking and troughing month to month.

This month the data hit another peak in growth, month to month.

The ADP Payroll report provides some insight as to what we might expect when the monthly Employment Situation report, or Jobs Report, is released by the federal government two days later. The ADP Payroll data closely resembles the Current Employment Statistics (CES) private sector worker data. Month to month and April to April growth was expected. This month it was thought that we could expect 210,000 to 230,000 payroll positions added, prior to revisions to the previously released data.  What was reported this April? How about 275,000 payroll positions added during April?

The month to month growth was 0.21%. Month to Month Growth was expected  all sectors.  Especially Natural Resources (Mining/Logging,) Construction, Education and Health Services (EHS,) Professional Business Services (PBS) and Leisure and Hospitality (LAH.)This month the largest movers were Construction, LAH, PBS, EHS and Other Services. There were modest declines in the seasonally adjusted payrolls for Natural Resources and for Information (IT.) Neither were a surprise as IT is always a wild card and Natural Resources may have been impacted by weather.

Notice the Revisions. The headline data has undergone major revisions since the first of the year.

This ADP payroll report should receive considerable attention during the next 48 hours.  We saw all sectors grow April to April.  The month to month declines in mining and logging and in Information were possible. Will we see something similar in the Government Data? We have been growing over 2.00% and we should continue growing at over 2.00% a year.

This means that we could see strong private sector growth reported this Friday in the Government data. Remember that the Non-Farm Payroll Data Current Employment Statistics (CES)  includes Government Jobs, and we are expecting even the government to grow this April.  The government may add another 6,000 to 16,000 seasonally adjusted workers. If the Non-Seasonally Adjusted CES data jumps by even 2.05% then the private sector could add 317,000 private sector workers. Add 10,000 government workers to that then the NFP number could be 325,000. If the prior month's data is revised up 22,000 as the ADP data was revised higher then that number would come in around 303,000, depending on the seasonal factors used.