Existing Home Sales have been struggling due to a lack of Inventory. We had more inventory than buyers during the Great Recession. We had a glut of inventory between 2005 and 2012. The law of supply and demand applies to real estate. We have been seeing same month inventory improvement since August 2018. The April Forecast Article projected increases month to month and April to April for Inventory, Units Sold, and Average Sales Price. What was recorded and what was reported by the REALTORS?

The Inventory Level jumped to 1.832 million units. Inventory was expected to grow for existing homes by 7% to 11% month to month and 2% to 5% April to April. Inventory was expected to be recorded non-seasonally adjusted between 1.8 million and 1.9 million units. This is 32,000 more units than we had during April 2018. It is still well below the "normal"m level of 2.1to 2.2 million units that we had during 2014, 2015, and 2016 during the month of April. Lower inventory normally means lower sales.

Existing home sales have an economic multiplier effect on the rest of the economy. Home sales great retail sales and work for those in both the professional business sector and the retail sector.  People will buy new furniture and furnishings for their purchase. Sometimes a new appliance or two are needed. Real estate transaction require real estate professionals in loans, insurance, moving and selling.

All real estate is local. The average sales price of your home is dependent upon you location, condition and motivation to sell. You sales price can be determined by what is happening in your city, town, village, school district, neighborhood and style or age of home and your amenities.Consult a REALTOR.

Are rising interest rates impacting house sales? Yes. Just not the way you are expecting. The average sales price for existing sales have been rising since 2012. The thirty year fixed rate has been bouncing around between 3.45% and 4.34%. The 30-year fixed was 4.14% at the end of April. If classic economic were applied to real estate, a drop in "price" should spike "demand," and more units should have been sold. What is forgotten is that as interest rates fall home buyers attempt to "catch the falling knife." They don't want to "lock" at too high of a price.

Units sold appear to be accelerating as interest rate increase. There was a drop in sales from 2005 through 2008 even as interest rates were falling.  Sales started to pick up as interest rates continued to fall. We failed to  hit the peak sales of existing homes during June 2014, 2015 and 2016 that we had during June 1999. We will have a better handle on this situation within the next two to three months. It appears that FOMO, the "fear of missing out,"is encouraging buyers to buy.

We should see increased sales as the inventory continues to recover and grow. A "healthy inventory" level is between 2.0 million and 2.5 million units. We should see average sales prices be bid higher as stories of multiple offer homes start circulating in the press.  We cannot have strong sales without a strong inventory level. What was missing from most discussion was the lack of full-time jobs during 2007-2017. We may see sales pick up now that we have had two years of consistently improving jobs data. 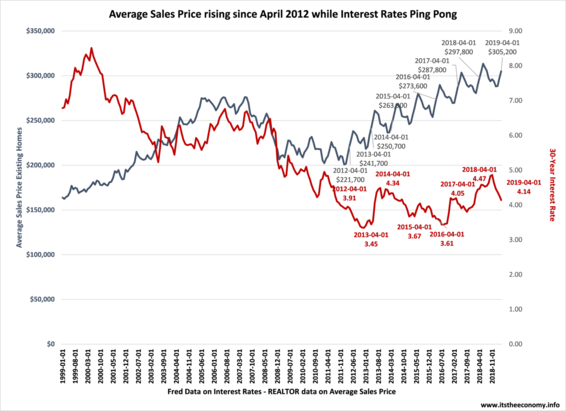 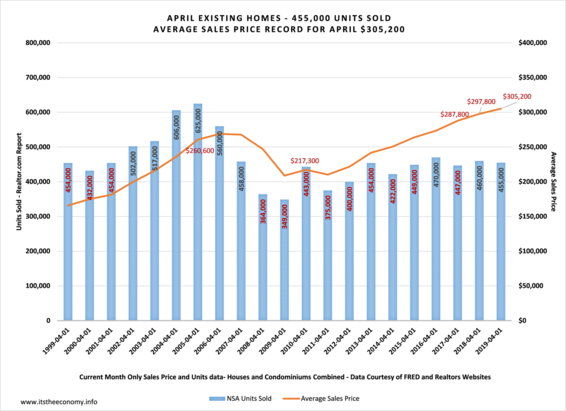 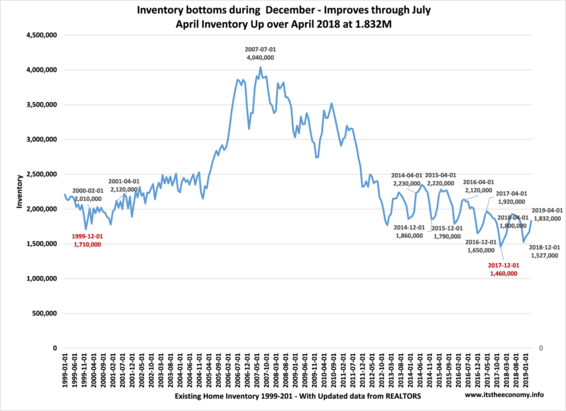 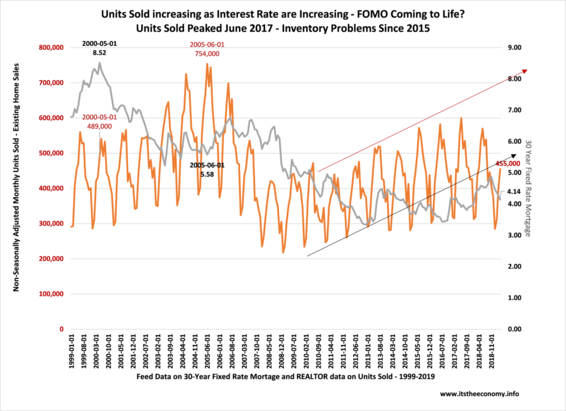