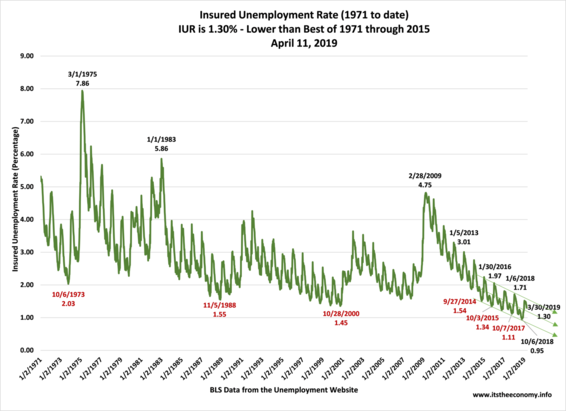 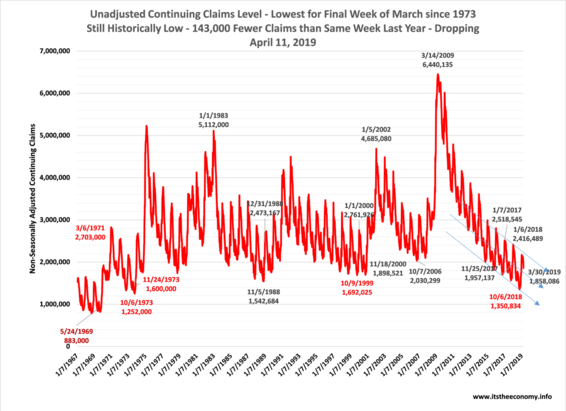 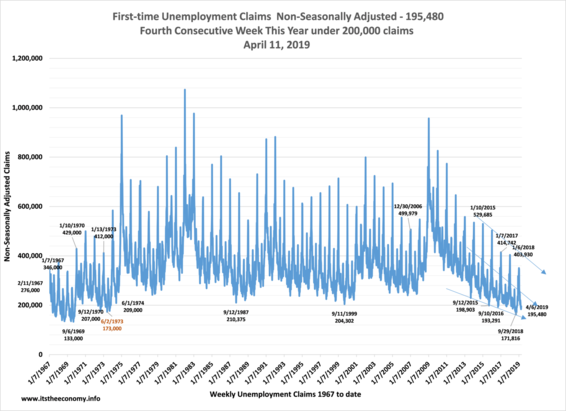 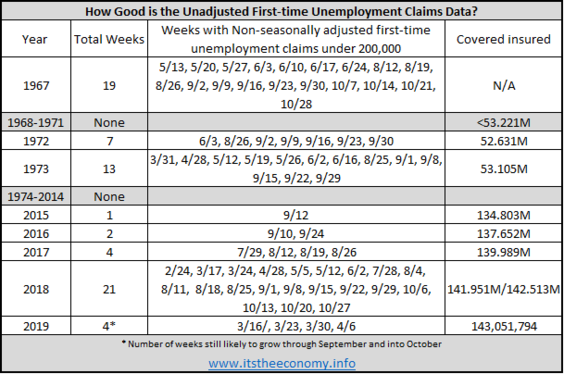 The former administration made a big deal of the FACT (False Assertion Considered to be True) that we had had over 90 consecutive weeks of seasonally adjusted first-time claims under 300,000 claims.  That administration rarely mentioned the seasonally adjusted continuing claims data and "never" discussed the Insured Unemployment Rate (IUR.) What happened this week is truly remarkable.

The non-seasonally adjusted (NSA) First-time Unemployment (FTU) Claims data was recorded at 195,480.  It was projected that we could see the NSA FTU value remain under 200,000 and that, due to the neutral seasonal factor of 99.6, that we could see the SA FTU reported under 200,000. It was also projected that the likely value would be 205,000 claims.

This is the fourth consecutive week with the NSA FTU Under 200,000 claims. This is more than we had during all of 2015 and 2016, and ties the 2017 count. The thing to remember here is that we did not see the NSA FTU fall under 200,000 claims until the end of July during 2017 and it did not happen until September during 2015 and 2016. Last year, when we set a record 21 weeks under 200,000 claims there were only 3 weeks under 200,000 by the end of March. The general trend is lower, just remember that there will be a mini-spike the second week of July in NSA FTU Claims. End of the quarter blues. This is all remarkable when you consider that we havethe most covered insured right now at 143 million workers. We had fewer than 53 million covered insured during the 1960s.

This was the lowest Seasonally Adjusted First-time Claims Level since November 1, 1969. The seasonally adjusted (SA) FTU claims data has been at or below 300,000 since March 7, 2015. We touched 300,000 SA FTU level during the week of September 2, 2017 after this year's revisions to the seasonal factors changed the SA FTU value from 293,000 to 300,000. The NSA FTU value is and was 250,627. This FACT has been shown to be an economic urban legend. The streak did not start when they said it started  and  should have been reported as ending multiple, except the authors of the report manipulated the seasonal factors to keep the streak growing. The SA FTU could have been reported at 195,000 claims.

The Insured Unemployment Rate (IUR) dropped to  1.30%.  There are a bevy of people who like to compared the JOLTS Job opening data with the monthly CPS (Current Population Survey) U-3 Unemployment level, even though the JOLTS data is more directly comparable to the CES (Current Employment Statistics) worker data.  Why don't they compare the current unemployment rate of 3.92%, non-seasonally adjusted, with the IUR of 1.30%? Why not compare the 6.932 million NSA U-3 unemployment level with the 2.009 million covered insured that were record mid-March? You should not do any of these comparisons. Compare the 1.30% IUR this year with the 1.43% the same time last year. We dropped to 0.95%, the lowest recorded, during October 2018. How low can we go?

The weekly unemployment claims data is actively ignored. There appears to be a thing as "too much good news" and "too much winning." Officially we have had more than four years with the SA FTU level under 300,000 claims. We have had two years of SA CC under 2 million claims. (The longest streak is January 7, 1967 to August 22, 1970 or 188 weeks.) The number of people who are eligible for benefits is being completely, totally, unabashedly ignored. Two million seasonally adjusted continuing claims between 1967 and 1970 meant that at its best the IUR was probably 1.72% (859,000 claims with maybe 50 million covered insured during October 7, 1967, the covered insured is unknown.)