The Current Employment Statistics Data is In Agreement with ADP,  more or less.

The Jobs Report Forecast Article "  April Jobs Report Should Fire on All Cylinders" made a number of projections regarding the Current Employment Statistics. The Non-seasonally Adjusted CES worker data has been growing by at least 1.88% since April of 2018. It was expected to grow between 1.91% and 2.00% this month. The Non-seasonally adjusted  Month to Month Growth was expected to surge up to 1.00%. The Non-Seasonally Adjusted data is projecting growth in all sectors from March to April and from April 2018 to April 2019. The Seasonally Adjusted month to month data is projecting growth in all sectors month to month and April to April. Wages were expected to jump.

The Jobs Report article also made projections regarding the Current Population Survey Data. It was projected that we could see one million full-time jobs added to the economy during April.  The Net Seasonally Adjusted CPS data could be slight gain or a slight loss.  Non-seasonally Adjusted Unemployment was expected  fall and seasonally adjusted unemployment was also expected to edge lower.  Multiple Job Workers to drop from March 2019 level and increase from April 2018 Level

The Current Population Survey Data painted a different picture. We "only" saw 393,000 full-time jobs and 124,000 part-time jobs created during April, Non-seasonally adjusted. We saw the unemployment level fall by 995,000 workers. The CPS and CES data are out of synchronization, again. When the jobs created is lower than the number of unemployed workers dropping out of the unemployment ranks then the participation rate drops.

What is happening to the missing participants?  The Participation rate is up from when President Trump Took office even with the unemployment rate being down. Remember that unemployed workers are participants. The April Effective Unemployment rate is the lowest that it has been since April 2008.  If we had the same participant rate that we had during April 2000 then we would have 11 million more workers. If you examine the Month 27 data for Former Presidents Reagan, Clinton, George W Bush and President Trump, you will find that President Trump has overseen the creation of more full-time jobs than the prior Presidents combined. You will also note that only President Trump and former President Clinton oversaw the reduction in unemployment during their first 27 months in office. The data will be analyzed further in the "Five Presidents at 27 Months" article.

It is interesting to note that the ADP payroll data reported a decline in moth Natural Resources (M/L)  and IT  month to month and all sectors up April to April. The month to month growth, as a whole was lower for ADP and the annual growth rate was higher for ADP than the CES data. 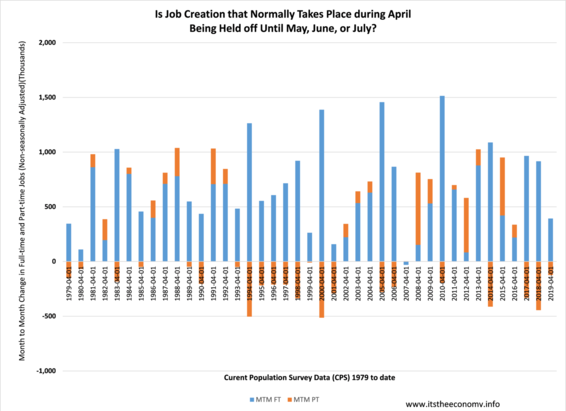 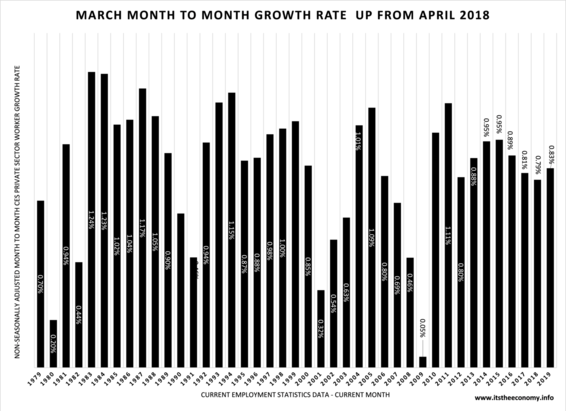 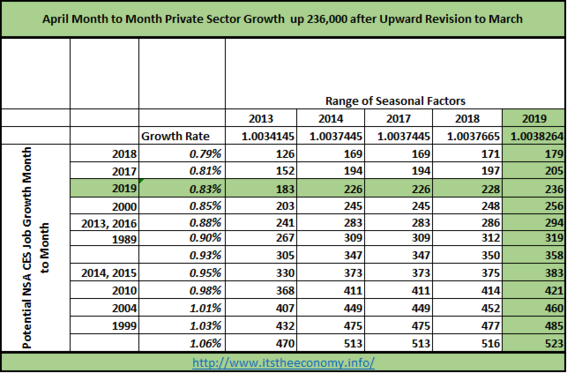 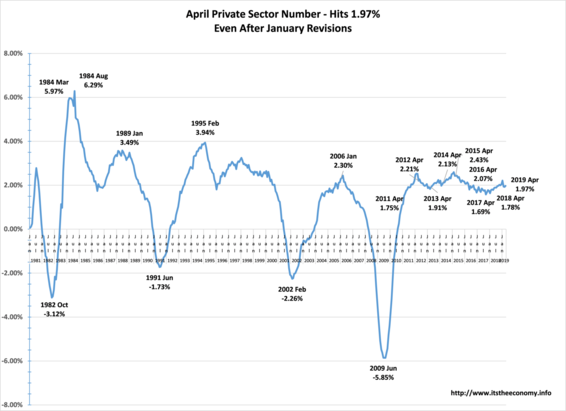 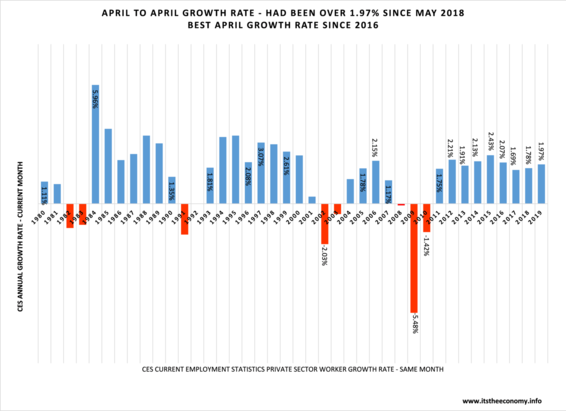