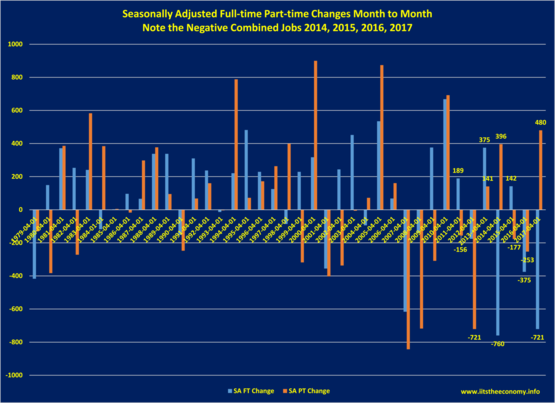 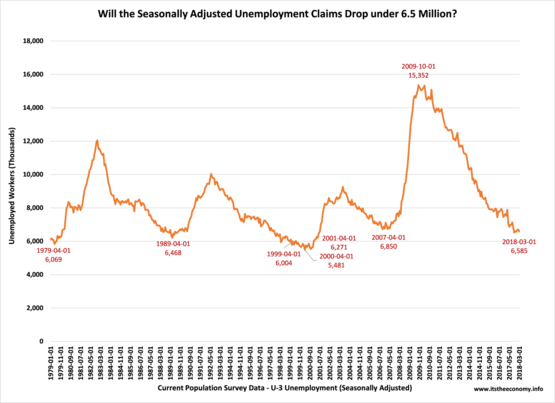 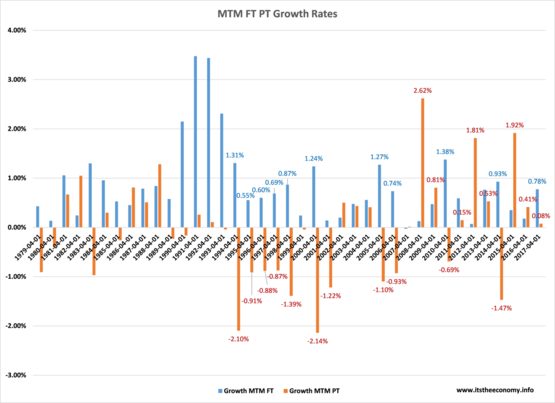 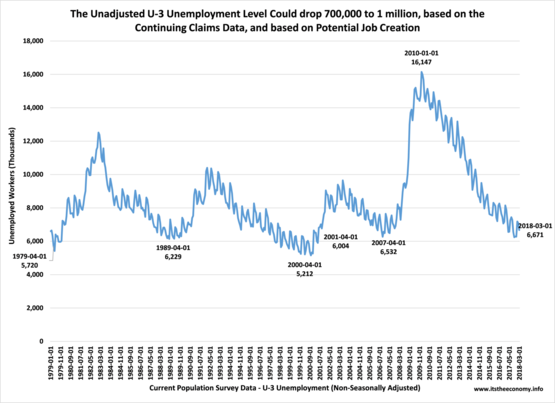 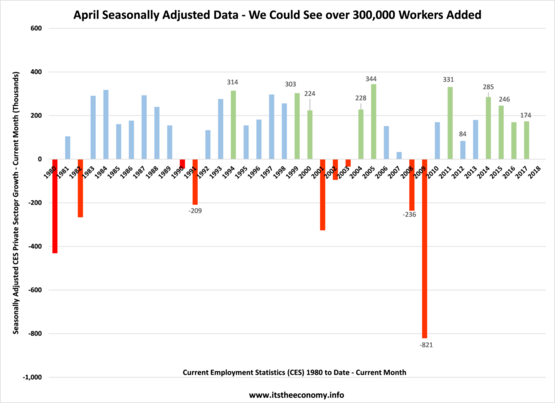 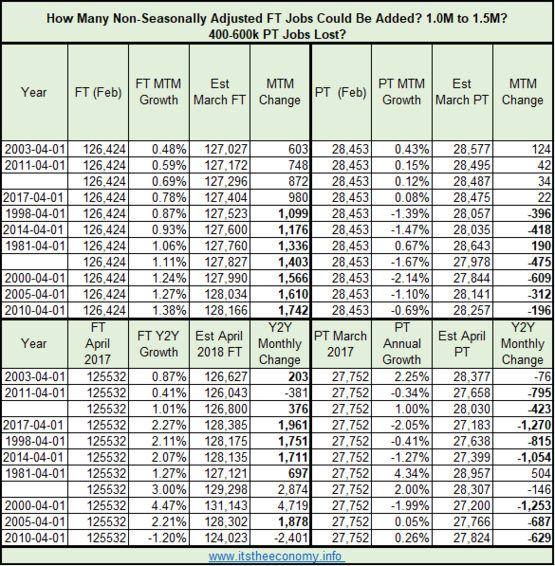 Will  We Grow as We Have during prior April Reporting Periods?

The monthly Jobs Report, or Employment Situation Report, is a critical piece of economic data that can move the markets. The Jobs Report is created using data from two different data sets. the Current employment Statistics (CES) Worker data and the Current Population Survey (CPS) Jobs data. The CES data is also known as the Establishment Data while the CPS data is known as the household data. Both data sets have seasonally adjusted (SA) and non-seasonally adjusted (NSA) data that is published with the reports. There are many ways to examine the data: Worker Growth, Job Growth, Unemployment, Sector Growth, Wage Growth, changes in jobs for men and women, changes in jobs for people by age group. The headline number is the SA CES Private Sector Worker number. This is the number that was used to create the Obama "Jobs FACT (False Assertion Considered to be True.) The seasonal factors were manipulated to manufacture the Streak. It is an economic urban legend. What can we expect from the two data sets this month?

We Will Add Non-Seasonally Adjusted Workers this Month - Potentially 1.2 Million Workers. This is not the number that you will hear, as it is the non-seasonally adjusted data. The reason that it is not the number reported is because if they reported this data then they would have to report the January data where the NSA CES worker number falls by roughly 2% every year. Last year we added over 1 million NSA CES workers. This was down from the 1.068 Million during March 2016, which was down from the 1.123 million workers added during March 2015. The best March "ever" was 2005 when 1.199 million private sectors were added.ins.

The Seasonal Factors change month to month and year to year. The seasonal factors have been on a huge decline since 1995. A lower seasonal factor means a lower seasonally adjusted CES Private Sector worker number. These numbers are reduced so that the gains can be spread over multiple months, smoothing out the peaks and valleys into consistent seasonally adjusted gains. How would you feel if your wages spiked one month and fell four to six months later? The seasonal factors were manipulated during the January and February and March reports this year. The other way to manipulate the data is to upwardly revise the prior month's data, or multiple months, higher and reduce the current month's data, and the other way around, too. January's data had gains in January shifted to 2016 and 2017. February's seasonal data could have been much higher. February's jobs report could have been reported up into the 400,000 range. Last Month's. The March Jobs Report seasonal factor was the lowest for March since 1979. Watch the Seasonal Factor. Watch the revisions to the February and March values.

How high can the Seasonally Adjusted Private Sector number be reported? What is interesting here is that even though there was only one April since 1979 where we actually lost NSA workers, there are nine April SA CES reports where it went negative.  It is not likely that the seasonal factor will reach the level used during April of last year. If we grow at the rate we did during 2010, and use the same seasonal factor, then we could add 369,000 SA Private Sector Workers. The 2016 values give us an SA CES value of 209,000.  Even if we only grow at the rate seen during 2000, we should add over 900,000 SA CES Private Sector Worker jobs and roughly 200,000 SA CES private  sector workers. It depends if you feel that last month was anomaly and January and February growth are more indicative of this economy or if you think that last month was a harbinger of jobs reports to come. It also depends if you believe the narrative that we are at "full-employment" and that there aren't enough workers to fill all the potential jobs.  Expect a number over 250,000 and do not be surprised by a number over 300,000. Expect the seasonal factor to keep the reported value under 350,000 and under President Obama's 331,000 and President Bush's 344,000.

This is hiring season. We should see the consecutive months of "jobs creation" FACT remain this month, and into the near future. Retail sales are up. Corporate Profits are up. Corporations need more workers to produce more revenue. Summer workers, seasonal workers, will be added. Expect a strong number of over 250,000 SA workers added - expect the NSA value to be over 1 million.

What can we expect from the non-seasonally adjusted data for Jobs.  What does a 2% increase in part-time jobs or an increase of 1% in full-time jobs mean? Is any of this possible? What of we see a spike in seasonal full-time (FT) jobs and a seasonal drop in part-time (PT) jobs? This column has used annual growth rates and monthly growth rates to project a range of possibilities for numerous economic indicators, especially new construction data, new home sales data, and existing home sales data. We do not need the "best" jobs creation data to see a huge job in non-seasonally adjusted job creation. If we grow as we did last year then we should see 980,000 NSA FT jobs created plus an additional 22,000 PT jobs created.  If we grow as we did during 2014 we could see 1.176 million FT jobs created and 418,000 part-time jobs trimmed for a net gain of 700,000 jobs. Normally we do not see seasonally adjusted combined FT and PT job gains. If the Obama administration used the SA CPS Jobs data to create their seasonally adjusted jobs streak then the streak would have ended during April 2014, April 2015, April 2016, and April 2017.  We could see NSA FT job creation and NSA PT job creation simultaneously. The seasonal factors change between the FT and PT numbers, by month, season, and year.

Unemployment should drop considerably. The weekly unemployment claims data that was released this past week included data on the continuing claims data. This is an entirely different data set than the CPS U3 unemployment data. The weekly data can give an idea of the direction that unemployment has moved between jobs reports. We saw a drop of 243,000 NSA CC claims between mid-march and mid-April. This is only a fraction of the unemployed population because not everyone who is unemployed receives unemployment benefits. last week the percentage covered was an astonishing 1.3% (the part of the unemployment rate that is receiving unemployment benefits) or roughly 1 in 3 or 1 in 4 of the unemployed. This is because some of the people losing jobs are losing part-time jobs or seasonal jobs. If this is an accurate representation then we could see the U-3 unemployment level drop by 720,000 to 960,000 people. we have seen unemployment drop by comparable amounts during 2015, 2016, and 2017 when we saw roughly 725,000 people drop off of unemployment during the past three April periods.  We saw drops of 800,000 to 900,000 during the  2011, 2012, and 2013 April periods.

April Unemployment, seasonally adjusted, could drop to its lowest level since April of 2000. If you have been listening to the news, the weekly unemployment claims data is the "lowest in 48 years." How can this be if the unemployment level, U-3, is only going to be the "lowest in 18 years?" Unemployment clams include those people who are eligible for unemployment benefits. The U-3 number includes those who worked seasonal jobs and are now unemployed, as well as those who worked part-time jobs, who do not qualify for unemployment benefits. Just on the drop of 250,000 NSA Continuing Claims (CC) data between mid-March and Mid-April the U3 level should drop at least that much.  The seasonally adjusted CC number from from 1.897 million to 1.836 million, or roughly 50,000 claims. If the 3x or 4x multiplier holds true the SA U3 should drop between 150,000 and 200,000.  In theory, it could tick up because people are looking for work and not finding it. We often see the SA U3 tick slightly higher during April before dropping during May. We already have fewer SA U3 workers now as compared to April of 2007. We could have the lowest SA U3 level since, and including April 2001 this month.  We had 214 million workers and 114 million SA full-time jobs at that time. Last month we had 257 million workers and 127 million SA FT jobs. Could we have 13 million more SA FT jobs and hundreds of thousands fewer SA unemployed workers? Yes.

We could have Record real CPS Job Creation and Report  Participation declining. The recorded value is the NSA data, which we anticipate will show serious jobs gains that are not negated by a serious drop in recorded unemployment. Government math has converted net gain to "reported" net job losses each of the past four years. If we see SA FT and SA PT numbers combine to a net loss, then it would take some serious manipulation of the SA U3 data to pull that number positive. Workforce population growth is a factor in calculating the participation rate. The mainstream media focus on the SA Participation rate. The population will grow. Will the workforce population  grow more than it did during February and March, as was recorded last year?  If the population, which is not "seasonally adjusted" grows faster than the SA net jobs number grows then the participation rate will fall.

What is yet to come? Wednesday we will receive the ADP Jobs report. The ADP  jobs data set is different from the CPS jobs data set and different from the CES worker data set. The ADP data is closest to the Private Sector CPS data. The problem is that the ADP data is only available in a seasonally adjusted format. It gives a general picture of what to expect on a sector basis from the CES data. It contains no information on full-time and part-time jobs. We should see men and women  should both add jobs. We should see construction jobs improve month to month and year to year. We should see leisure and hospitality improve month to month an year to year. Thursday we will receive more information on the Unemployment Claims data. Friday we will receive the Jobs Report data for April.

The Jobs Number should pop. The worker number should pop. The unemployment level should drop. The devil will be in the seasonal factors and the revisions to the data from February and March. We could see a spike in jobs, a drop in unemployed workers, and little change to the participation rate if the workforce population is reported artificially high, again."Everything" could be nullified by the seasonal factors that are used to convert the NSA FT and NSA PT jobs numbers that are recorded  to the SA FT and SA PT jobs numbers that are reported.The economy is doing really well. The people who massage the data appear to want to keep this information away from the voters. 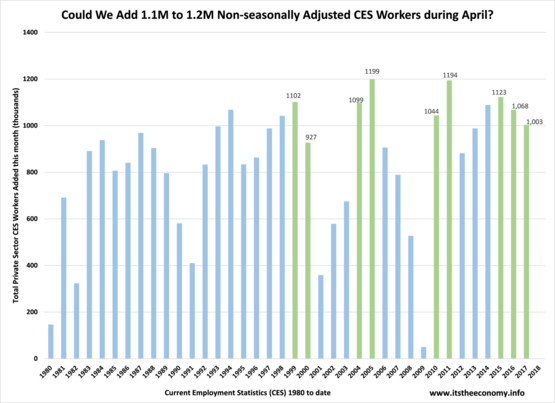 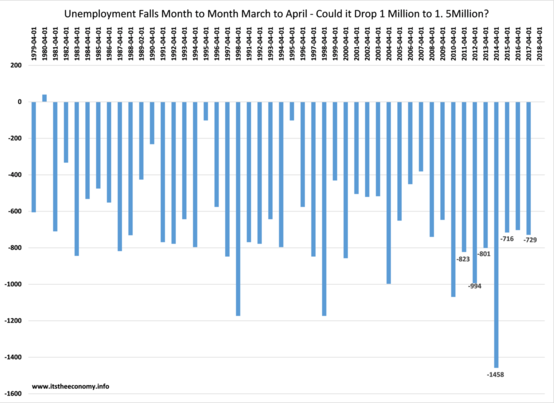 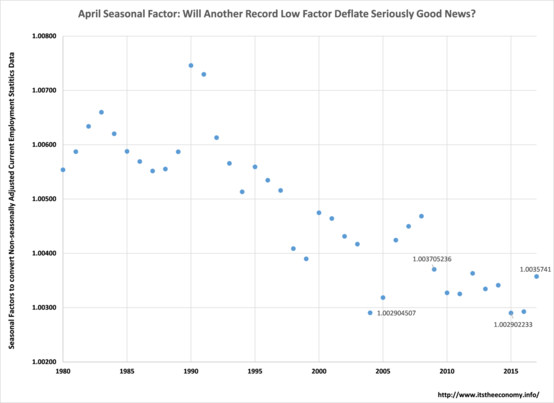 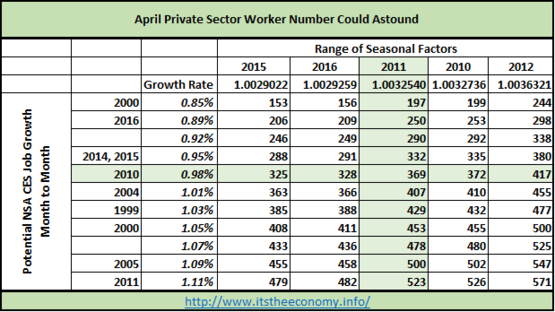