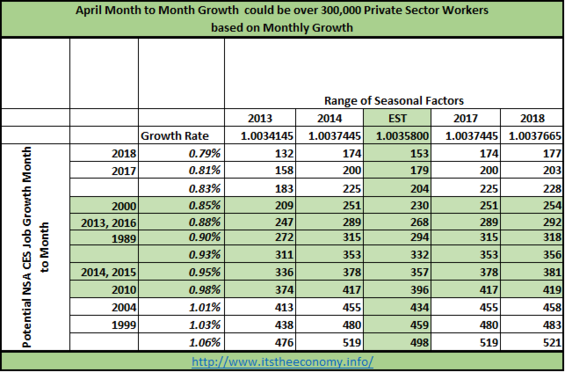 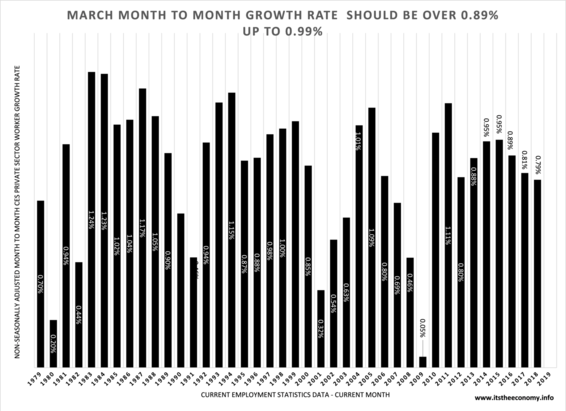 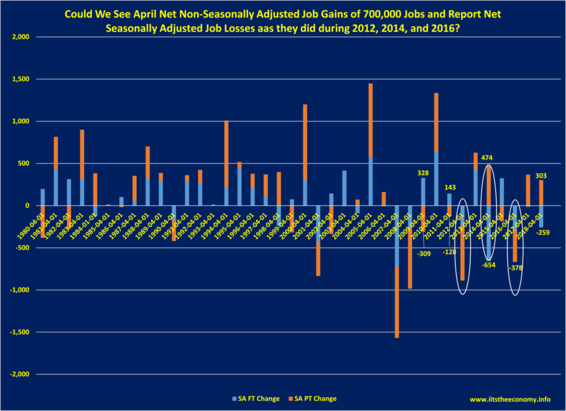 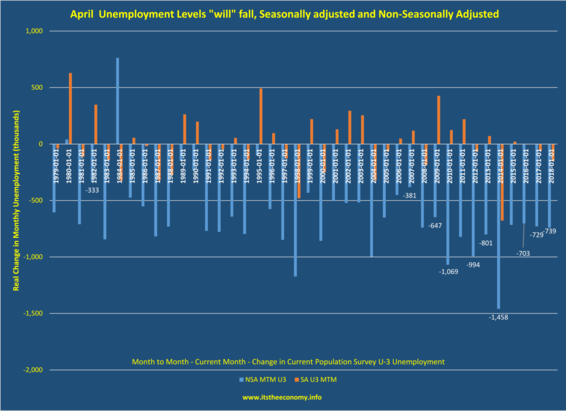 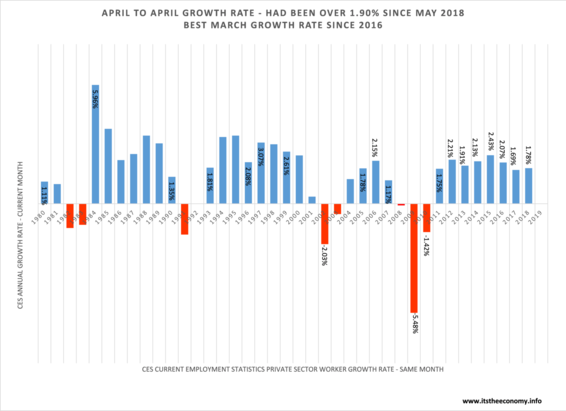 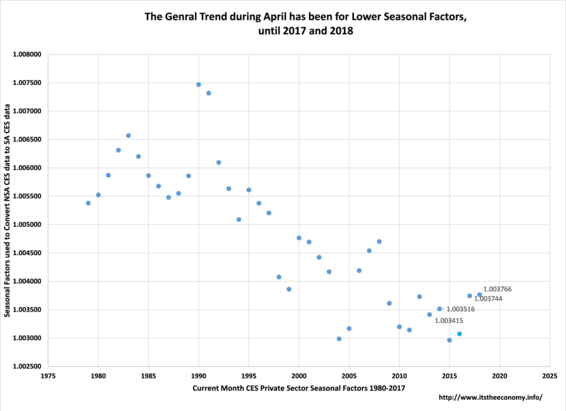 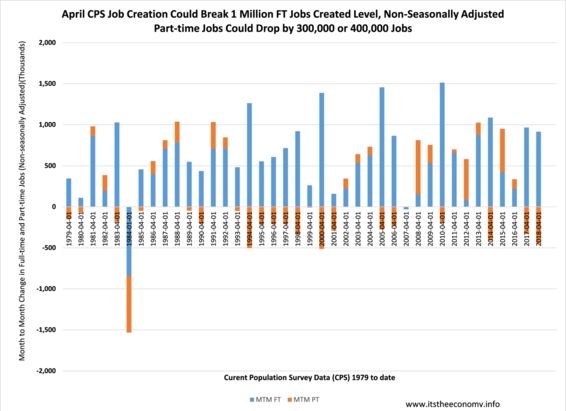 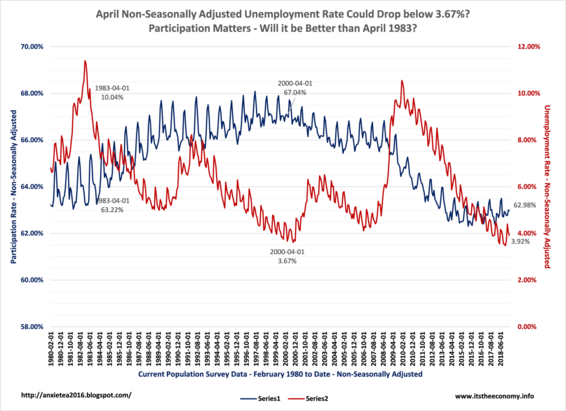 The ADP Payroll Report Forecast was for all Sector to Fire on All Cylinders.

The Current Employment Statistics Data is In Agreement with ADP.

The Non-Seasonally Adjusted data is projecting growth in all sectors from March to April and from April 2018 to April 2019. The largest percentage growth month to month is expected in Construction, Leisure and Hospitality (LAH,) Mining and Logging (M/L,) Professional Business Services (PBS,)  and Other Services (OS.) The weakest growth could be seen in the Financial Activity (FIRE) sector. The best April to April growth is expected in M/L, Construction, PBS, Education and Health Services (EHS,) and FIRE.  The annual growth in M/L, Construction, and PBS could pull up the average weekly wage data while the increase in EHS and LAH could pull down the average weekly wage growth.

Watch the revisions. We have seen upward revisions to the prior months data for fifteen of the past 26 months. There are advance numbers, the headline numbers, and the preliminary data, released the following month, and "final" number released two months after the advance value is released.  If the March data is revised up by 30,000 workers, from 196,000 non-farm payroll workers (which includes government workers) to 226,000 workers that would reduce a 272,000 value to 242,000. The same could be said if the February data is revised higher from 33,000 to 63,000. The 226,000 workers could remain the same and the boost to the February data would borrow 30,000 workers from April.

The Net Seasonally Adjusted CPS data could be slight gain or a slight loss.  We "reported" seasonally adjusted job losses during April 2012, 2014, and 2016. Job Streak? What Jobs streak? The "Jobs Streak" was really the seasonally adjusted Private Sector CES worker streak. We could see a spike in the SA CPS data if we grow as we did during 2000, 2005, and 2010. We were coming out of a recession during 2010 and kicking into overdrive before the recessions of 2001 and 2008 the other two times.

Non-seasonally Adjusted Unemployment "will" fall and seasonally adjusted unemployment may fall.  Last week we received the mid-April continuing unemployment claims data. We saw a drop from mid-March to mid-April. It is perilous to compare two surveys that measure different things. The weekly claims data is the number of unemployed workers who have recently lost work, are seeking work, and receiving benefits. The U-3 unemployment level is those who say that they are out of work and looking for work. Big Difference. We should see a drop in NSA U-3 unemployment of more than 750,000 workers. The SA U-3 could fall 250,000 to 500,000 workers.

Expect Wages to Jump. There are many more ways to examine the data. We may set another round of April Wage records, by CES sector, as people are lured back into the workforce, or into the workforce for the first time, by higher wages. Hours may improve as the weather improves. The combination of hourly wage improvement and hours worked will boost the average weekly wages. When average weekly wage growth is multiplied by annual worker growth than total earnings will soar.

Expect Multiple Job Workers to drop from March 2019 level and increase from April 2018 Level. Multiple job workers tend to drop from March to April and have been increasing April to April. We could see total multiple job holders increase from the 7.667 million level last April and drop from the March 2019 level of 7.853 million. The  number of people working a FT primary job and a secondary PT job could follow a similar pattern, dropping from the 4.473 million level last month and increasing from the 4.237 million level from April 2018. The level of dual PT workers should fall month to month, and possibly April to April, as the total number of part-time jobs are trimmed this month. Dual FT jobs could swing big in either direction as one full-time job may replace two lower paying full-time jobs or two part-time jobs. The expected spike in full-time jobs means that some may decide to work two full-time jobs and "make hay while the sun is shining."

This column will also examine data regarding multiple job workers and how men an women are doing in the Jobs The jump in mining and logging jobs, construction jobs and professional business sector jobs may boost male full-time job levels, and may help women, too.  The jump that is expected in Education and Health Services and Leisure and Hospitality should boost the number of women working in the workforce and may boost men a little, too.

Sooner or later the CES worker data and the CPS jobs data will get into sync. Expect a strong headline CES "jobs number" as workers jump into the market. Expect the seasonal surge to be seasonally adjusted lower so that participation does not spike, according the the CPS data. Expect the unemployment rate to challenge the 3.67% low of April 2000.