An April New Home Sales Price Record was Set this Month at $393,700

The new home sales data came in at the highest level of April sales since April 2007. We set an April Average Sales Price Record. Every month this year has seen sales improve from their 2018 levels. Inventory is up 10.2% from last April and still in a stable 325,000 to 350,000 unit range. Let's ignore the good news and talk  about anything else other than the economy. Let's leave that to other columns. This column discusses the economy. What was recorded and what was reported in the April New Home Sales Report?

We saw 66,000 units sold this month - within the 64,000 to 72,000 units projected. The April Real Estate forecast article saw a possibility for a huge units sold number.  We tend to see peak new home sales during March, so the drop from 72,000 units to 66,000 units is not surprising. There was the thought that there could have been a backlog from the government shutdown.  It is important to note that the January through March data was revised higher than last reported.

Upward revisions to the data indicate that we are having a strong year this year than last year.

The Current Year Sales data stands at 244,000 units. Last April we had recorded only 229,000 units sold through April, non-seasonally adjusted. This is a 6.55% increase from last year. Last year we had a total of 617,000 units sold during the entire calendar year.

The April Average Sales Price set an April Record at $393,7000.  There has been variability in the average sales price from month to month as we experience a drop from the prior year or a new record set. The overall trend is up 2.23%. This is in keeping with Shelter inflation of roughly 3%.

This data should have been received very well today. Improving new home sales mean that more construction workers are required. It also means that we should see more sales at Home Building Material and Garden Equipment  Stores, more sales at Electronic and Appliances Stores, and more sales at Furniture and Furnishing Stores.

The Great Recession was a Housing Recession followed by a Jobs Recession, followed by a Retail Recession. The Retail Renaissance started the recovery. We did not recover all of the lost full-time jobs and maintain them until February of 2017. We have still not caught up with the pre-recession new home sales levels of April 1996 (262,000 units,) 1997 (281,000 units,) or 2007 (297,000 units.)  We cannot expect a new home industry to take a leap of faith and "rebuild" an inventory level to pre-recession levels if sales are not at pre-recession levels. Sales cannot fully return until inventory fully returns. It is a Catch-22.

New home sales should slow from this point forward. That doesn't mean that they won't be better than last year. This year is trending to be better than 2018, even with the government shutdown.  Where we see existing home sales peak during June, new home sales peak during March. This report was well within expectations. The inventory level dropped a little. It is still up compared to last April. Sales were the best during April since April 2007. We set an April New Home Average sales price without jumping 3%. It was remarkable. There was a lot to discuss. 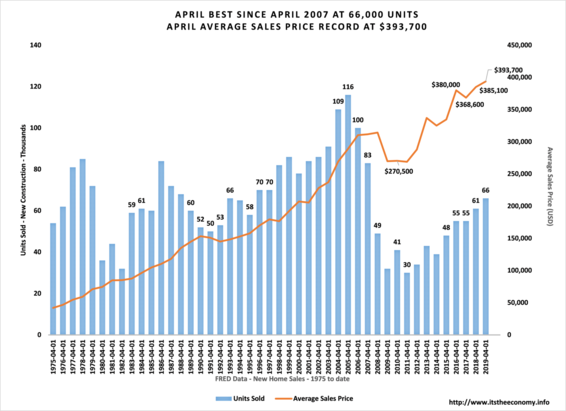 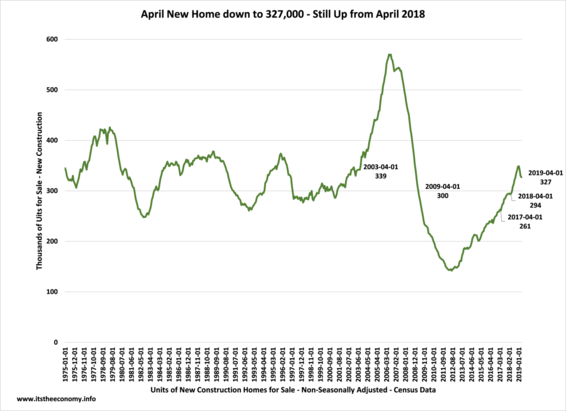 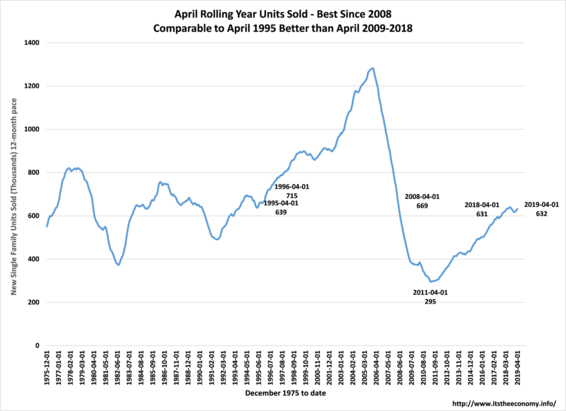 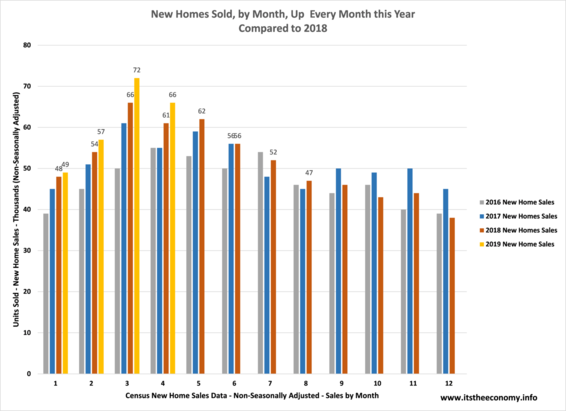