The consumer is getting healthier in the United States. Full-time jobs were at a record high for April, after being at a March record high, and a February record high. The Government Shutdown of December and January appears to have reduced the New Construction and Existing Home Sales levels from "normal" levels. New Construction hiring is up this year, so we could see more new home sales and more retail sales this year than last year. April is a "down is up" month when comparing the non-seasonally adjusted data and the seasonally adjusted data.

There are some who believe that Retail sales are 70% of GDP. That may have been true under the Obama Economy. It was not so during the first quarter of this year. The economy was firing on all cylinders during the first quarter with Personal Consumption Expenditures (PCE,) Gross Private Domestic Investments (GPDI,) Government Consumption Expenditures (GCE,) and Net Exports all adding the the Quarter to Quarter and Same Quarter Growth Rates. The contributions to quarter to quarter growth were 0.82% PCE, 0.92% GPDI, 1.03% Net Exports, and 0.41% GCE. This means that PCE was only approximately 25% of GDP, not 70%.

The Rolling Year growth is slowing while it is growing. The growth of non-seasonally adjusted total retail sales was over 5% for a brief period of time during 2018. Last month it dropped to 4.27%.  Annual growth is expected in all sectors except Sporting Goods, Hobbies, Books and Music (SGHBM) and Miscellaneous Sales, non-seasonally adjusted.  The largest annual growth is expected in Building Materials and Garden Equipment (BMGE,)  Furniture and Furnishings (F/F,) Electronics and Appliances (EAS,) and Food And Beverage Stores. The current year sales are only growing at 2.25% compared to last year after March. A current year growth rate lower than the rolling year growth rate indicates slower growth this year.

Month to Month, non-seasonally adjusted sales, are expected to fall in all but two sectors. It is anticipated that the NSA MARTS data will only show improvement in BMGE and Gas Station Sales (GASS.)  People are waiting for refunds and are saving money for their May and June Closings on new and existing homes.

The Seasonally adjusted Data shows a similar patter for rolling year sales. The seasonally adjusted (SA) rolling year growth rate is 4.48% while the current year growth rate is 3.08%. All sectors should grow from the April 2018 levels except SGHBM. This sector Hit 82.007B in rolling year sales August of 2008 before bottoming at $77.564B during February of 2010. It rebounded to $82.026 billion by March of 2013 and hit its post-recession peak of $87.641 billion during July of 2016. last month it was $77.738 billion. Watch GAS Station Sales as they have risen over 11% annually each of the past two years during April. The largest percentage growth April to April should be in F/F, Clothing and Clothing Accessories (CAC,) Non-store Retail (NSR,)Motor Vehicle and Parts (MVP,)  as well as food and drinking places (FDP,) and Food and Beverage Stores (FBS.)

Retail sales are an important part of the overall economy. The same GDP report that revealed that retail sales were not as important during the first quarter of 2019 as during prior quarters also revealed that personal savings rates were around 7.0%. Are they saving for retirement, housing, or a Summer Vacation? This should be a good Retail sales report, especially the seasonally adjusted data, for all sectors except Sporting Goods, Hobbies, Books and Music. The NSA Rolling year sales rate may drop below 4.25% while the SA Rolling Year rate may stay around the 4.48% level reported last month. We need to watch the Current Year growth rates. We are still on pace for another $6 trillion year. 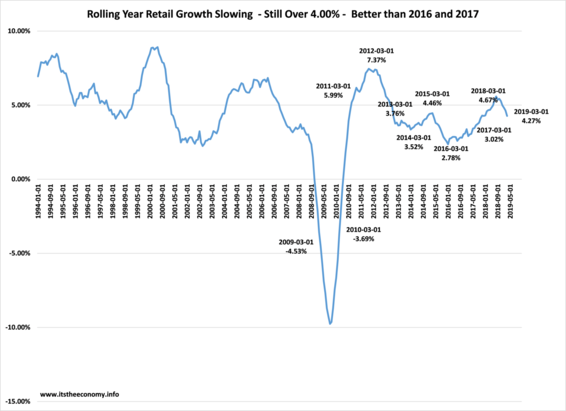 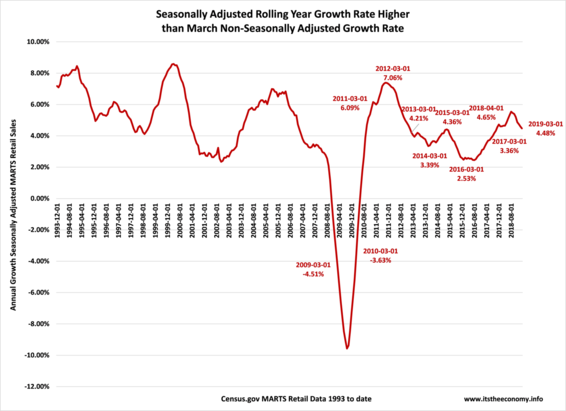