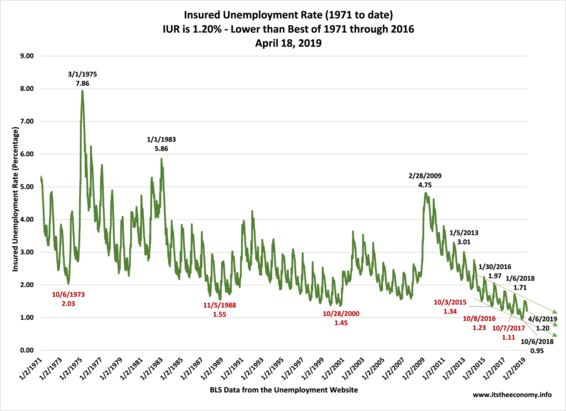 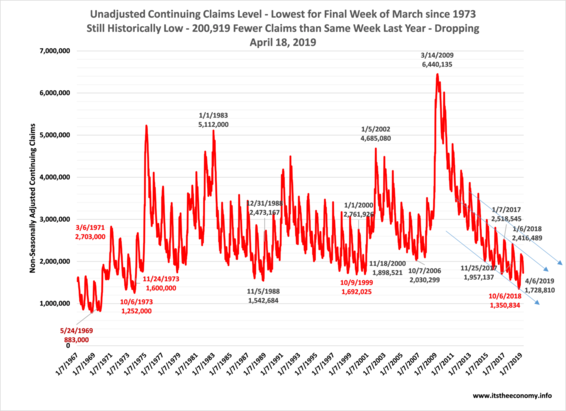 Last week we both record and reported First-time Unemployment Claims under 200,000.  This week is more of the same. Remarkable.

Last week we recorded, non-seasonally adjusted (NSA,) and reported, seasonally adjusted (SA,) fewer than 200,000 first-time unemployment (FTU) claims. Last week we butted up against the 2 year anniversary of  the SA Continuing Claims data under 2 million claims. It was projected that we could see another week of SA FTU claims under 200,000 recorded and reported, and that we would see under 2 million SA CC recorded and reported this week. What happened?

The headline Seasonally Adjusted First-Time Unemployment Claims data was reported at 192,000 Claims. It used to be considered good news when the seasonally adjusted data was reported under 300,000 claims. Last week we were at 197,000 SA FTU claims.

The number of weeks with NSA FTU claims under 200,000 reached five consecutive weeks this week.  This is more than were recorded during 2015, 2016, and 2017. This is ahead of last year's record pace.  The question is how low can this value fall by the end of September? The last time we had back to back weeks under 200,000 NSA FTU was October 25th and November 1st 1969.

The Seasonally Adjusted CC data was "reported" at 1.653 million claims - under 2 million claims for more than 2 consecutive years or 104 consecutive weeks. We have 165,000 fewer SA CC claims this year than the same week last year.

We will receive the continuing claims data for the second week of April next week. This is the week closest to the Jobs Report data collection date.  If fewer people are collecting unemployment benefits then we should have a lower unemployment rate and a lower U-3 unemployment level. The thing is that the U-3 level is people who are out of work who are looking for work. The Continuing claims data is for people who were working who are out of work. This is a big difference, especially as more "non-participating" workers come off the sidelines and find work.  It is similar to comparing the JOLTS job opening data, which resembles the Current Employment Statistics (CES) worker data with the Current Population Survey (CPS) Jobs and unemployment data. The three surveys measure different things, with differing errors of uncertainty. You might as well compare the 1.728 million NSA CC with the 6.708 million job openings. We had a historic level of February Job Openings, Quits, Total Separations, and Hires. We have population adjusted record lows for first-time claims, continuing claims, and that is reflected in the IUR.

This report was remarkable. I have used that word so many times that I had to go to astounding. Eventually, either due the size of the workforce, or a weakening, and yet still strong, economy, the unemployment claims levels will rise. The first-time claims will eventually edge over 250,000 then 275,000, then 300,000. The talking heads will claim that this is the end of the Recovery and attempt to will a recession into being as they attempted to do this past Winter. That isn't happening right now. The media will ignore the good news and hop on any weakness, perceived or real. But, back to the Barr Press Conference.... 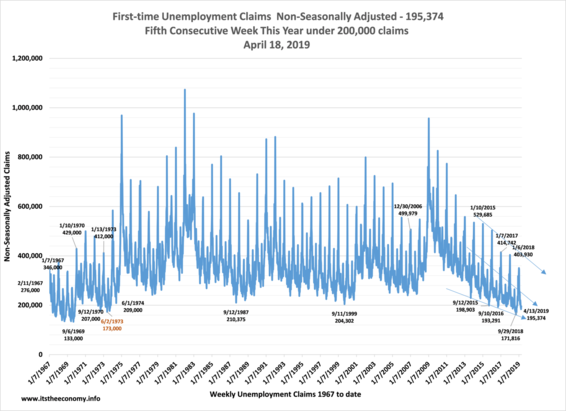