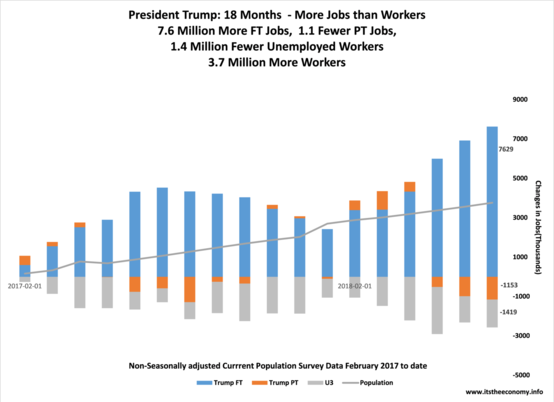 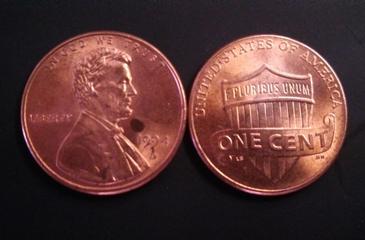 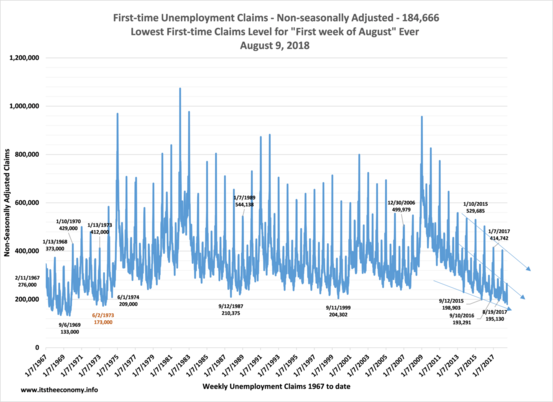 This week was a relatively slow week for economic data. This slack week allows for a deeper dive into the Jobs Report data for the Month of July. There was a historic weekly unemployment claims report issued, and a remarkable CPI Inflation report that required deep dives, too.

(Aug. 6) Most weeks after the release of the Jobs Report, or Employment Situation Report, this column produces an article in the "Five Presidents at __ Months" series. This month "Five Presidents at 18 Months: Best Ever" continued the comparison of President Trump with former Presidents Reagan, Clinton, George W. Bush and Obama. President Trump has added more full-time jobs than his predecessors. Any interesting situation that was identified was that the workforce population grows the most during Republican Presidencies.

(Aug. 7) This week we saw the June JOLTS, Job Openings and Labor Turnover Survey, the week after the July Jobs Report was released. There is a considerable amount of confusion as to how the Jobs Report data on job openings, hire, quits, and separations compare with the Current Employment Statistics worker data and the Current Population Survey U-3 unemployment levels."June JOLTS: Job Openings Off All-Time Peak" details that the highest quit rate are in three of the four lowest paid sectors.The same could see about the job openings data. Three of the four highest job openings sectors are the lowest paid sectors.  Apples, Oranges, and Tomatoes.

(Aug. 8) There is a common belief that the drop in the participation rate was due to the retiring of Baby Boomers. It is wrong. "July's Aging Workforce: Record for Over 55" details how there are more people over the age of 55 who are employed and who are unemployed. The over 55 groups are over-participating. Teenagers and people in their twenties are under-participating.

(Aug. 9) Thursday is still "Unemployment Claims Report Day." The former Obama Administration used to tout consecutive weeks with fewer than 300,000 seasonally adjusted claims. We started seeing the non-seasonally adjusted first-time claims level dip below 200,000 claims during September of 2015. "Another Record for First-time Unemployment Claims" detailed how this happened once during 2015, twice during 2016, four times during 2017 and now nine times during 2018.

(Aug.10) The discussion of inflation, wage inflation, consumption inflation, is picking up steam. Are wages keeping up with inflation? Yes. Is the way that inflation is being measured obscuring some things that we need to know? Possibly. Do we have Commodity Inflation or Commodity Deflation? Do we have Service Inflation or Service Deflation? Are we seeing Shelter Inflation or are we spending less of our monthly income on shelter? The seasonal factors did not add up to 100.00% this month, they added up to 100.13%.

The week provided some information on the economy. Jobs are up. Unemployment is down. Wages are up. Inflation is up for services, down for commodities. We can focus on  manufacturing jobs, men at work, multiple Job workers, manicures or Manafort.