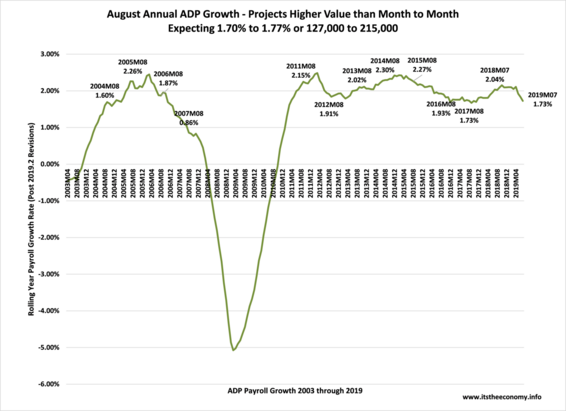 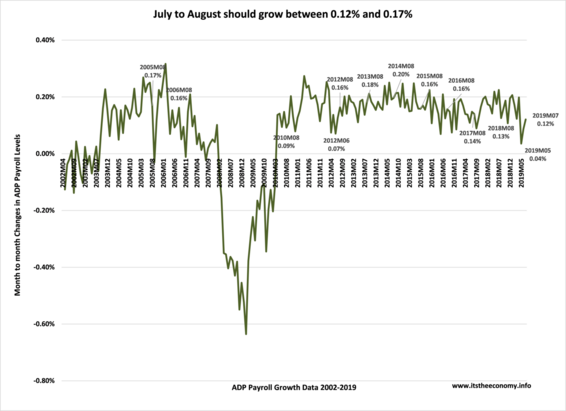 Month to Month ADP Growth Expected - all except IT and Construction should grow.

August to August Growth should be in all sectors.

The monthly ADP Payroll report is released the Wednesday prior to the release of the Government's Employment Situation Report. The ADP Payroll data is private sector and seasonally adjusted. The Employment Situation report has non-farm payroll as the headline number. The private sector data is a different number. Both the NFP and Private Sector have seasonally adjusted and non-seasonally adjusted components. There are at least three ways to examine the data: Month to month growth, Same month to same month growth or Rolling Year Growth, and Current Year growth

The Rolling Year data is projected growth in all sectors from last August. The sectors with the largest growth rates are expected to be in M/L, PBS, Construction, Leisure and Hospitality (LAH,) and TTU. The annual growth rate peaked last Summer, according to the February Revisions to the ADP data. It was relatively stable between 1.94% and 2.04% during September of 2018 through January 2019. We should see growth between 1.70% and 1.77%, with the creation of 153,000 to 216,000 payroll positions this month. Both measures overlap between 153,000 and 216,000. This would indicate that we should expect a number around 185,000 positions added.

The current year data is trending with the trajectory of 2013 and 2016. If we see growth along the line of 2016 then we could see 192,000 payroll positions added. If we grow more like 2013 then we could see 206,000 positions added this month. This means that he three growth calculations overlap between 192,000 and 206,000, or 199,000 seasonally adjusted payroll sector positions reported as being added this August.

The ADP Payroll numbers are comparable to the Current Employment Situation (CES) worker and wages number for Private sector growth. They do not include government positions. The government payroll positions will be projected in the Employment Situation forecast article. The net net is that there is some potential for a solid ADP number. There is also the possibility of a weak ADP Payroll number. This is not always the case. Some months the ADP number looks very strong or very weak. If we get a large enough month to month bump then it will push up the rolling year value.