The August Jobs Report, or Employment Situation Report, was released the first Friday of September. There is considerable data to analyze. So far this column has produced the following articles:

The August JOLTS Report (Job Openings and Labor Turnover Survey) had some interesting data for those who want to examine the data, especially the non-seasonally adjusted data.

Job Openings, Unemployed Workers, and Continuing Unemployment are three kids from three different families. I have compared the three data points to red apples, pomegranates, and red Anjou pears.All three are fruits. All three grow on trees. One makes good cider. The Job Openings data closely resembles the Current Employment Statistic (CES) data for workers. The U-3 Unemployment level comes from the Current Population Survey (CPS) for jobs. The Weekly unemployment claims data is for those who had a job covered with unemployment benefits who lost their job and are in their second week, or later, of benefits.The headline data for all three is the seasonally adjusted (SA) data. The seasonal factors used to convert the non-seasonally adjusted (NSA) data that is recorded to the SA data change by week, month, season and year for continuing claims and by month and year for the JOLTS and CPS data. If someone is going to compare 7.291 million job openings with 6.370 million NSA U-3 unemployed workers then they may as well compare the job openings data with the 1.4 million NSA continuing claims for the middle of September. Jenny, Jill, and Jessica may all be girls. One may be a jock, the other a nerd, and the other the Class President. Someone could be all three and homecoming queen to boot. They are not the same, in this instance.

Job Openings  ticked down, non-seasonally adjusted, from 7.439 million to 7.291 million.  Job Openings tend to spike, or even peak, during April and July. The Drop from July to August was not as pronounced as is normal. There were 6.164 million total job openings during August of 2017 compared with 7.291 million this August. Government job openings jumped from 541,000 to 696,000. The largest amounts of job openings were in Trade, Transportation, and Utilities (TTU,) Professional Business Services (PBS, Leisure and Hospitality (LAH,) and Education and Health Services (EHS.)

August is Quits Month - the end of Summer.  August is normally the peak month for quits for the entire year. We set a record for quits for any month last month and beat that record this month. Quits were highest in TTU, LAH, PBS, and EHS. The same four categories.

Hires were up during August. Hires improved from 6.172 million to 6.440 million during August. This is very different from the headline CES number that was reported last month because the hires offset the separations.

Separations Were up from 6.05 million to 6.78 million. Leisure and Hospitality, TTU, PBS, and EHS saw the largest levels of separations.

Leisure and Hospitality, Education and Health Services, Other Services, and Trade, Transportation and Utilities were the four lowest paying sectors during August. This is something that needs to be referenced while discussing job openings and quits. Three of the four highest quit, job openings, and hire sectors are the lowest paid sectors. WE could reduce quits if workers are paid more each week. 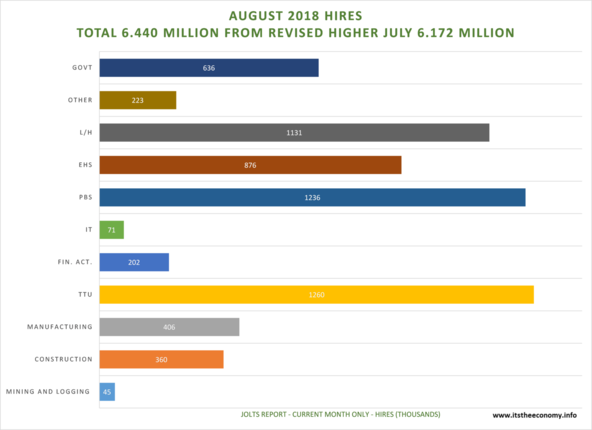 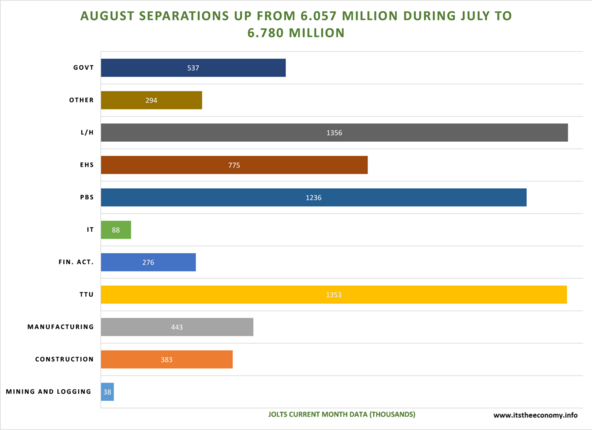 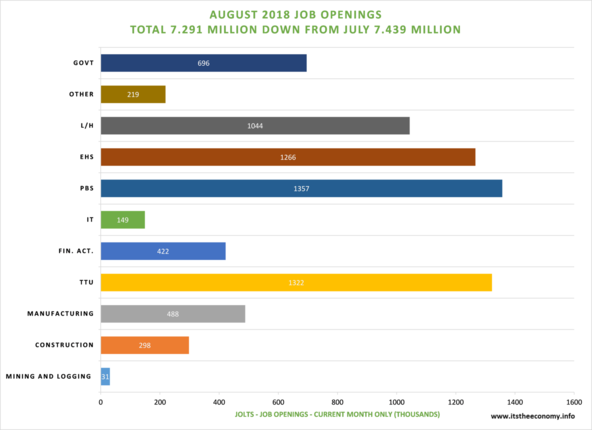 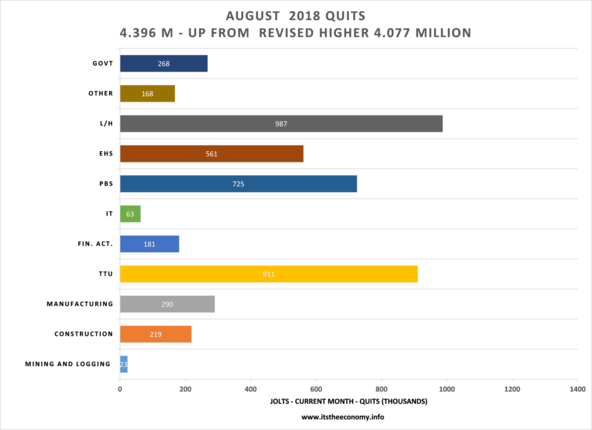