It was our Second Best Hiring and Job Openings August Ever

Last month the August Jobs Report was strong and weak at the same time. The article "August Jobs Report Reveals Record August Jobs Level"  revealed that seasonally adjusted Current Employment Statistics (CES) workers grew in all sectors August to August. It also revealed strong seasonally adjusted Current Population Survey (CPS) Jobs growth, as well as the best CPS participation since August 2013 and the lowest August Unemployment Rate since 1969. The headline worker data was weaker than expected, except when you consider that all sectors have more workers than they had last August and all sectors received a pay raise from last August. Other articles covering the August Jobs Report were:

The trend is still our friend for Quits and Separations. If we have record levels of quits and separation it is because we had a record level of Jobs and Workers for the month of August this year, and we did have a record August for jobs and workers. Job openings fell August to August. Hiring did not fall by the same amount. Part of the reason job opening fell was because hiring remained strong in light of the lower level of job openings.

The same four sectors led in Job Openings, Hires, Quits and Separations. This is a sense of déjà vu because this column has been discussing this situation for months to years.

LAH, TTU, and EHS were three of the four lowest hourly wage sectors during August. LAH was also the one that had the fewest hours. Someone will quit if they can find more hours or more pay in this economy. People also quit to go back to school as students or teachers. The histograms for the month can be found here.

The August JOLTS Report was remarkable. There is a considerable amount of things to say. We saw the same things that we have seen for a number of years. We saw an increase in quits and separations, setting all-time records for each. We saw hiring and job openings fall from July to August, as we have seen during prior years. The same four sectors had the most job openings, hires, quits, and separations. Three of these four sectors continue to have the three of the four lowest hourly wages offered.

It's déjà vu all over again. You will hear more about how there are more JOLTS Job Openings than CPS Unemployed workers. There are also more Job Openings than people collecting unemployment benefits on a regular basis. You might as well compare the temperature in news studios in Albany, Albuquerque, Altoona and Atlanta on August 9th. 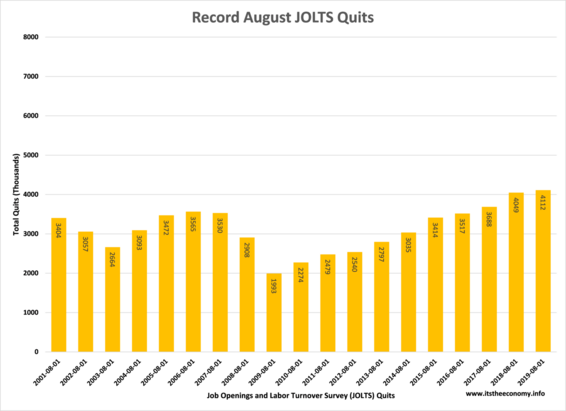 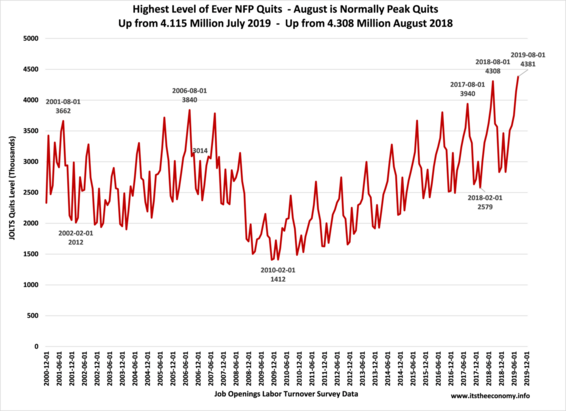 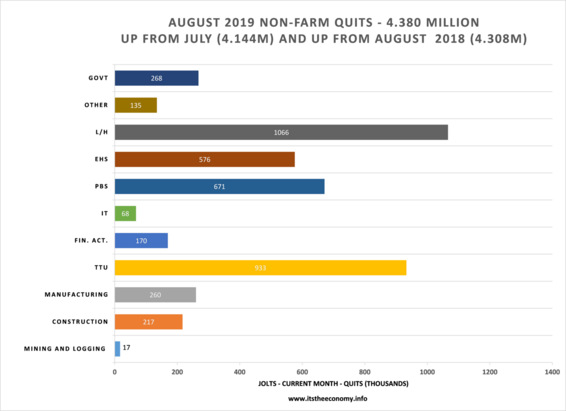