Average sales prices have been climbing steadily since 2011

Expect the data to show non-seasonally adjusted decreases month to month and increases August to August for the Existing Home Market. Watch the inventory level. 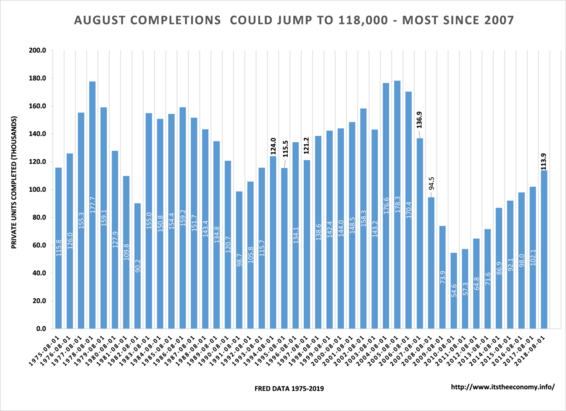 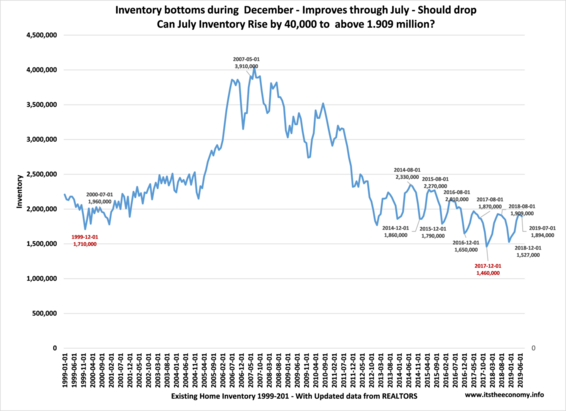 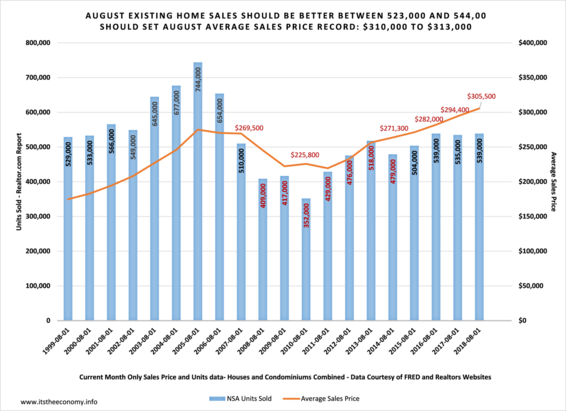 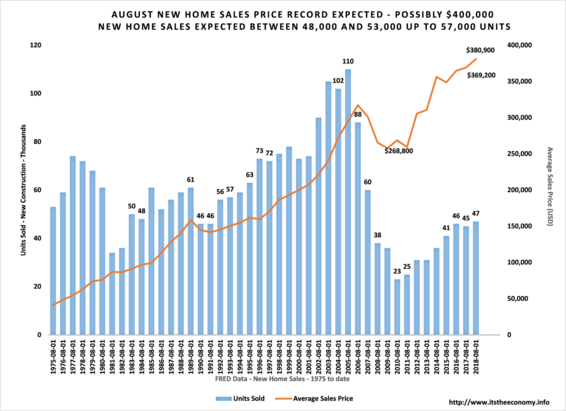 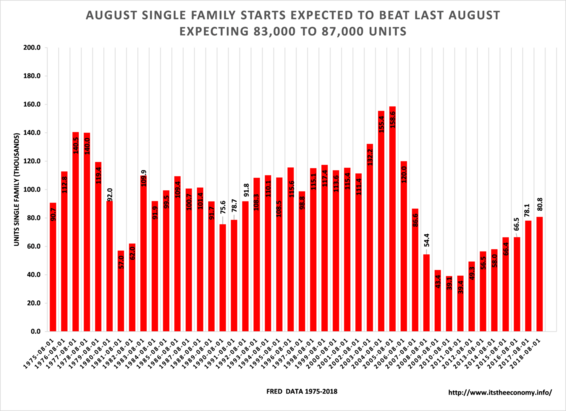 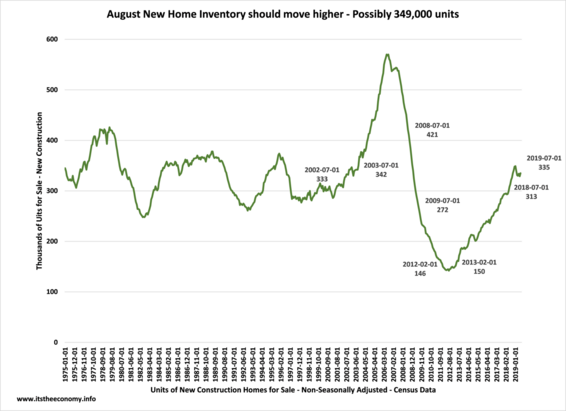 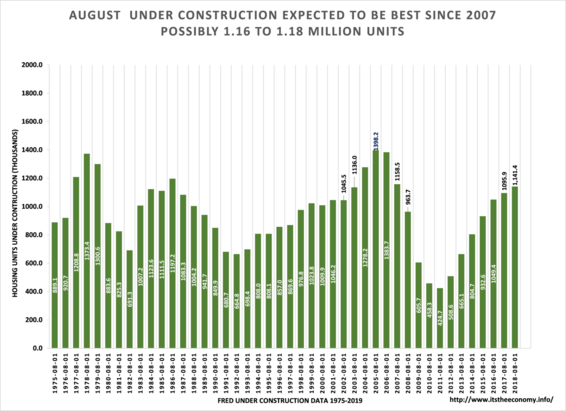 The August New Home Data projects the best August since 2007

New Home starts bottomed during 2011 and have been growing since that time. We are still nowhere near the single family start levels recorded during the 1980s, 1990s and early 2000s. It is likely that the Starts level will drop from the non-seasonally adjusted level of 85,000 units. It is also probable that the start level will rise from the 2018 level. The current year data indicates that we are we are tracking between the 2017 level and the 2018 level for starts. This means that we should see between 80,000 and 83,000 units started. A considerable amount of information has been flying around regarding the slowing starts levels. New home starts tend to peak during May. We saw our best month of the year during July.

This has been the "year of completions." Completions spiked last August. The month to month data indicates that there could be a slight drop from the July level of 108,000 units. The annual data indicates that we could see a jump from last year's 118,000. There is an overlap between the month to month and August to August growth between 118,000  and 121,000 units. The current year data is indicating that this is the best year for completions since 2007 as we approach 920,000 to 925,000 units for the year to date.

The new construction data feeds into the new home sales data. We have had slower than normal, faster than the past decade, levels of new home sales this year. We need inventory to maintain those levels of sales. There was concern that we were below 300,000 units for a prolonged period of time. Now we are approaching 350,000 units. A level between 350,000 and 375,000 appears to be proper.

The current year sales level are higher than all of the years between 2008 and 2018, inclusively. We have seen more sales through the month of July than we saw through July 2008, July 2009, all the way through to July 2018. We are in our best new home sales year during the past 11 years. We are trending with the current year sales paces of 1988 and 1994. If we match those sales levels then we could see 59,000 units sold, as we did during those two August Sales Periods. What all of this means is that we should have our best August since 2007. It means that we are unlikely to match the August 2007 level of sales of 60,000 units. It means that we should see a value between 50,000 and 59,000 units sold.

We could set another August Average Sales Price Record. We have seen some months this year where a new average sales price record was set and other where the average sales price dropped from last year's value for the same month. Shelter costs have been rising at over 3% a year every month this year. This means that we should see the new home sales price jump by at least 3%. There is the possibility, based on the month to month changes that we could drop below last year's $380,900 and drop to $376,360. There is also the probability of an increase of 3% to $399,600. This means that a $400,000 New Home Average Sales Price is a distinct possibility.

New Home construction feeds into new home sales. This has been "the year of the completions." This has been a period of time where existing home inventory has not been strong. Existing home inventory has been dropping same month to same month since 2015. It is possible that some of the month to month drops in average sales price are a result of some builders attempting to reduce their new home prices to a level closer to existing home sales list prices. If we see the completions level pop, as expected, then this could be could for either this month's sales data.

New home sales have a synergistic impact on the rest of the economy. New homes need new appliances, and often "need" new furniture, new electronics, new home and garden equipment, and sometimes a new car for the new garage. New home construction also requires construction builders, retail sales people in the home and garden sector and other sectors. last month there was a massive upward revision to the June sales data that skewed the annualized rate of sales much higher than was originally reported. Peak annualized sales normally hits during March, sometimes April.