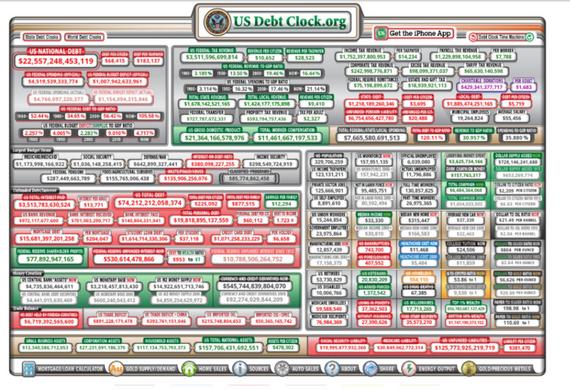 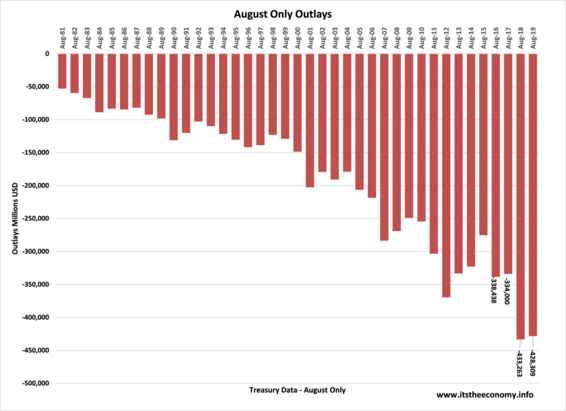 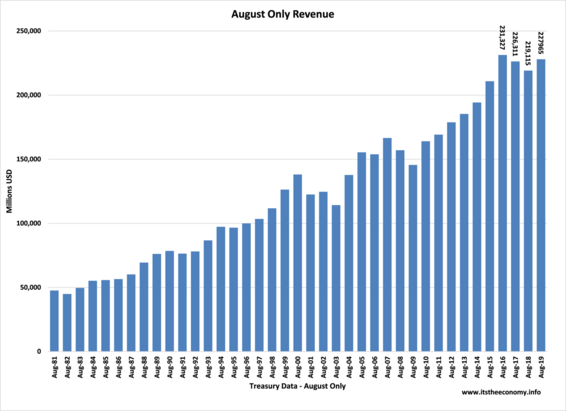 The August Treasury Report Projected a $1T deficit for this year

The debt clock rose from $22.506 trillion to $22.557 Trillion this past month, according to the US Debt Clock. The debt rose by $200 billion according to the Monthly Treasury Report. What is missing is that the deficit is officially smaller this August than last August. Also, it appears that some people did not read the disclosure at the forward of the report.

Always read the big box disclosure. The report starts with "Outlays for Military Active duty and retirement, Veterans' benefits, Supplemental Security Income, and Medicare payments to the Health Maintenance Organizations and prescription drug plans accelerated into August, because September1, 2019, the normal ate fell on a non-business day." The same thing happened last August.  It also states that every August for the past 65 years has been a deficit month.

Revenue was up from last August from $219.112 billion to $227.965 billion. It was also reported that that total receipts, corporate and individual, have increased from $2.985T to $3.088 trillion. The tax cuts have generated more revenue.

Debt and Deficits. The deficit this month was $200 billion this month compared to $214 billion last August. Revenue was up, spending was down, and still spending exceeded revenue.

The Debt Clock and the monthly report do not reconcile. This is the problem with two organizations keeping the books. The year to date deficit is $1.061T. Next month we should see a surplus in the neighborhood of 120 billion dollars, meaning that we should see a deficit of "only" $940 billion. The borrowing from the Public this year is only $838 billion compared to $1.108 billion year to date last year (table 2.) If we run a surplus next month could that borrowing drop to $718 billion? The expenses that have been a burden to September during other years have been placed upon August this year and last year. Revenue is up. Unfortunately, Congress has a spending problem.