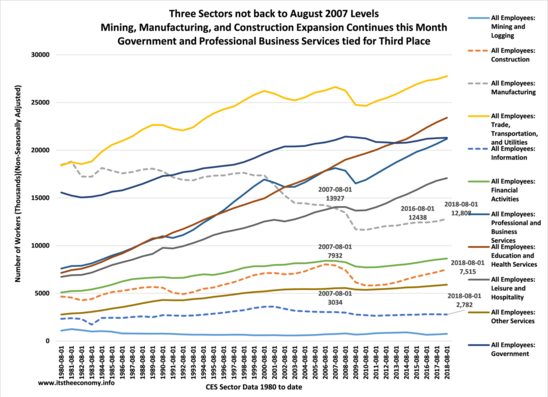 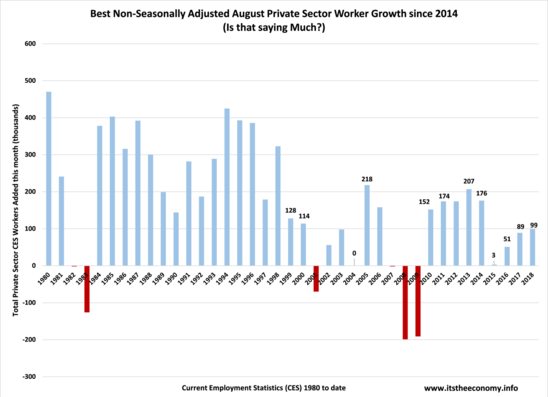 Wages and Workers  Data Better than was Reported

The August Employment Situation Report, or Jobs Report, was released Friday September 7 at 8:30 AM. It was received fairly well, not as well as it should have been received. This column had projected:

The article "August Jobs Report: Workers Up, Participation Down" detailed the data from both the Current Employment Statistics (CES) worker data and the Current Population Survey (CPS) Jobs data. The "Headline" non-farm payroll was reported higher than the "experts" had projected. There were 201,000 non-farm payroll workers added and 204,000 private sector workers added. There were concerns that the seasonally adjusted (SA) private sector data was revised down by 44,000 for July and down 29,000 for June. There were some cheers regarding improving weekly wages. When weekly wages and workers rise gross annual wages increase at a faster pace.What did the data reveal?

The largest increase month to month was in Government Workers. There were 235,000 non-seasonally adjusted (NSA) Government workers who joined the economy. There were 89,000 NSA Education and Health Services workers who joined the economy, 76,000 new people added to the Professional Business Services sector, and 20,000 new construction workers added to the economy. There were declines in Leisure and Hospitality, Other Services, Trade/Transportation/Utility, and IT. This was as expected.

The only sector that lost workers August to August was the Information Technology Sector. This, too, was expected. Mining and Logging, Construction, Manufacturing, and Professional Business Services saw the largest growth, by percentage, year to year. These have been described as the "dirty fingernail jobs."

Wages Jumped, on average, 3.35% August to August. You may have heard that it was lower than that. You have to look at the non-seasonally adjusted number of workers and the non-seasonally adjusted weekly wages for each sector. The largest annual growth were registered in the Financial Activities, Mining and Logging, Information Technology, Construction, Trade, Transportation, and Utilities. Even Leisure and Hospitality saw wages jump 3.13%.