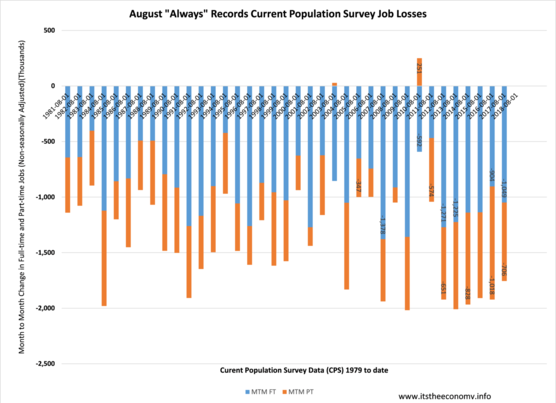 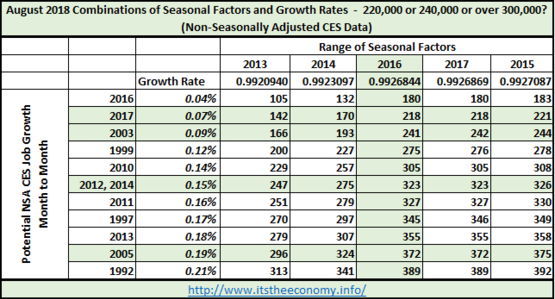 The Monthly Jobs Report, or Employment Situation Report, is one of the most anticipated economic numbers of the month. It is created using two different data sets that measure different things. The Current Population Survey, CPS, data measures the number of full-time jobs, the number of part-time jobs, the number of unemployed workers, the number of men working, the number of women working, the workforce population, and therefore the number of workforce participants. The Current Employment Statistics, CES, data measures the number of workers, non-farm payroll or private sector, and the level of wages on an hourly or weekly basis. The headline number is the seasonally adjusted, SA, non-farm payroll (NFP) number. The number that has been referenced in the "Job Creation Streak" has been the seasonally adjusted private sector workers data. This data is different from the NFP number in that it does not include government workers. This distinction was important last month and will  be important this month. The data that is reported is the SA data. The data that is recorded is the non-seasonally adjusted, NSA, data. The seasonal factors used to convert the NSA data to the SA data change by data set, category, month and year. This article will examine the CES and CPS data.

The Non-Seasonally Adjusted Private Sector Data should rise considerable this month. There are Multiple ways to examine the data. This column uses month to month changes, same month changes, rolling year data, and current year data. July is normally the peak of the CPS jobs data, non-seasonally adjusted. Meanwhile, the CES data tends to add more workers during August. This will confound some people as the number of workers will rise this month and the participation rate should fall this month. Recently we have seen the July to August growth rate at 0.04% and 0.07%. It was even 0.00% during 2015. That's right, zero.It has normally run between 0.14% and 0.19%. Right now our current year trend is with the number of private sectors worker added during 1997, 2005, and 2014, NSA. We are growing faster this year than during 2016 or 2017, even after they were upwardly revised between the December 2017 and January 2017 jobs reports. There were 452,000 private sector workers spread between 2016 and 2017. This changed the rolling year growth rate from an improving market to a slowing market. The month to month data is indicating a growth between 241,000 and 327,000 SA CES workers.

The devil is in the data, the seasonal factors, and the revisions to the two prior months of data. This is the advance August vale, the preliminary July data, and the "final" June data. There are annual revisions every January Jobs Report, sometimes multiple years, so final is relative. If the data from July is revised higher by 30,000 workers this effectively "borrows" 30,000 workers from this month's data. A solid 225,000 would become a ho-hum 195,000. A rocking 325,000 would become a strong 295,000. The seasonal factors have been fairly steady the past fiver years. If we grow as we did during 2014 and use the same seasonal factor as was used during 2014 then we could see 275,000 workers added. Remember that we are tracking with 2005 and 2014. The month to month growth rate and the rolling year growth rate are overlapping between 240,000 and 270,000. If we grow at 0.15% monthly then the seasonal factor means that we could see  247,000 to 325,000 workers added. Both are projecting the possibility of a number with a "3" as the first number. Expect a 255,000 number for SA Private Sector Workers added before revisions. Expect the seasonal factor to be lower than last year.

We should see some significant changes in employment levels recorded in Leisure/Hospitality Services and  Other Services - Going Down. It is the end of Summer. We could see a down-tick in Trade, Transportation and Utility workers as well as IT worker/s. We should record a spike in Government workers, Mining/Logging workers, Construction workers, and Manufacturing workers should all show significant non-seasonally adjusted worker growth.

Seasonal factors mean that we we should see month to month gains reported in all sectors except IT.

We should record August to August worker growth in all sectors, even Information Technology. The biggest gains should be see, percentage growth, in Mining/logging, Financial Services, Professional Services, Education/Health Services, and Leisure and Hospitality.

The seasonal factors mean Information and Technolgy may be reported lower this August than last August.

We should see a seasonally adjusted bump in jobs. The upward seasonal adjustment to the part-time data could offset the still a still negative full-time job number.

Both Seasonally Adjusted and Non-seasonally Adjusted Unemployment Levels should drop this month. The U-3 unemployment data is different from the weekly continuing claims data, and both are different from the JOLTS Job Openings "Separations" data. The discussion of more job openings than unemployed workers is statistical non-sense. People are attempting to compare an orange with a lemon with a lime. Not everyone who works is eligible for unemployment benefits (the continuing claims data.) Not all people who report being unemployed were working last month (the U-3 number.) The JOLTS job openings data is highest in the sectors with the lowest wages and the highest "quits" levels. Also, remember that the U-3 unemployment rate is, and has been, skewed lower by a  still historically low participation rate. The July Participation rate was slightly lower than the July 2014 participation rate. It was significantly lower than the July 2001 participation rate.

If we are comparing our unemployment rate with 2014 that would be valid. If we are attempting to compare our unemployment rate with 2001, as some pundits did, that would be statistically disingenuous. There were 4% of the population who were not participating.The changes in population since 2001 mean that we had more "missing participants" than we had unemployed workers during July.

Expect gibberish about the lowest seasonally adjusted unemployment rate since the dawn of time. Right now the July 2018 SA U-3 Unemployment rate stands at 3.87%. The lowest it has been since 1980 was 3.84% during April of 2001. The problem is that the seasonally adjusted participation rate during April 2001 was a record high 67.35%. This July it was 62.94%. Different months. Different seasonal factors. The point is that the participation rate was almost 4.5% lower during July 2018 than April 2001. The two data points cannot be seriously compared without calculating the missing participants and adding them to the unemployed workers.

Other Areas to watch. This column writes monthly articles on the number of jobs and unemployment levels that men and women are experiencing. This column also writes articles regarding changes in multiple job workers. Last August we saw a decrease month to month and August to August for multiple job workers. This was on the heels of a number of years of steady multiple job holder growth. The significant drop in full-time and part-time jobs that is expected means that we should anticipate a drop in the number of multiple job workers. Last year we did experience a spike in people working two part-time jobs as compared with August 2016. If we really are in a labor shortage, as is being promoted in the media, then we may see those people not returning to school picking up the slack with some part-time jobs. If we do see a decline in Multiple job workers this month, we should see that number rise through October, November, or even December. The peak multiple job worker month varies from year to year. Will the spike in "dirty fingernail jobs" mean an increase in jobs for men this month? Will the demand for labor pushing August to August wage growth over 3%? Will President Trump maintain his lead for Full-time Job creation after 19 months in office compared to former President Clinton?  Will he have reduced unemployment more than either former Presidents Reagan, Clinton, George W Bush, or Obama?

This should be a remarkable, one would even say august, August Jobs Report. We should keep pace with some of the best non-seasonally adjusted private sector worker growth years. We should see year to year gains in all sectors, non-seasonally adjusted. Unemployment should drop significantly, NSA, and may drop more than SA CPS jobs are created. The drop in seasonally adjusted workforce participation and the gains in SA CES private Sector workers will cause some head-scratching for those who have not read this article. There should also be a spike in Government jobs that will boost the NFP data even higher than the private sector data. Watch the revisions to the CES data and the seasonal factors used this month. Watch them every month. The "weaker than expected" July data may be revised higher and may "weaken" the August data. Next week this column will examine the ADP data and see how it compares with the worker data, remember survey is a different data set from the NFP worker data because it does not have any government workers. 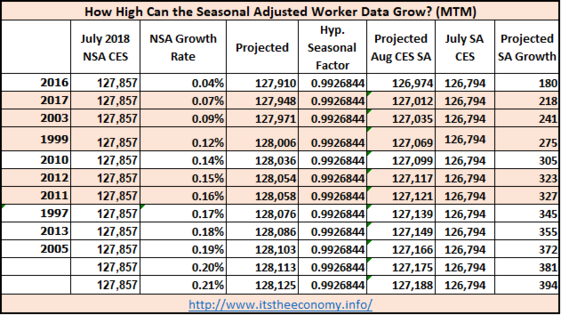 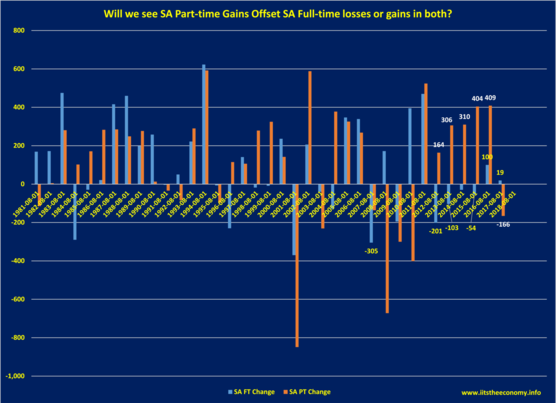 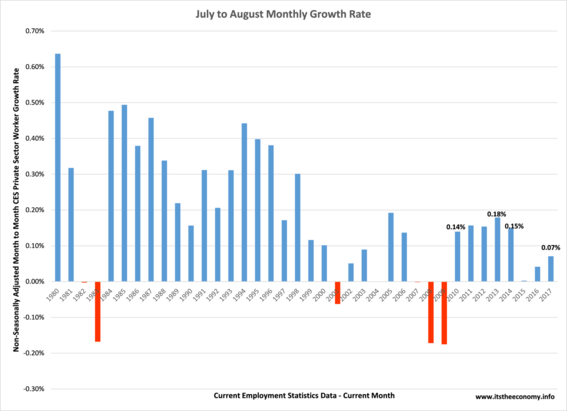 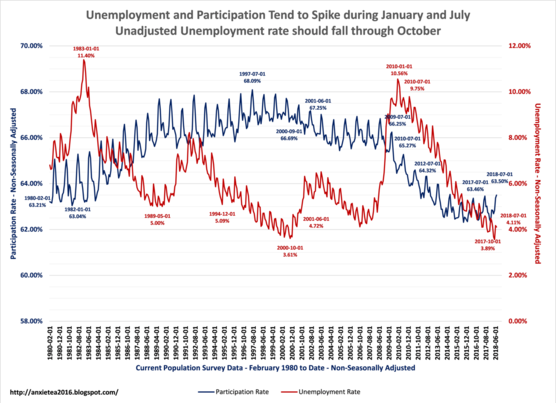 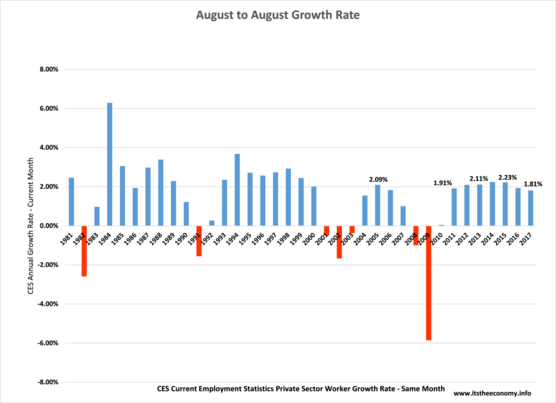 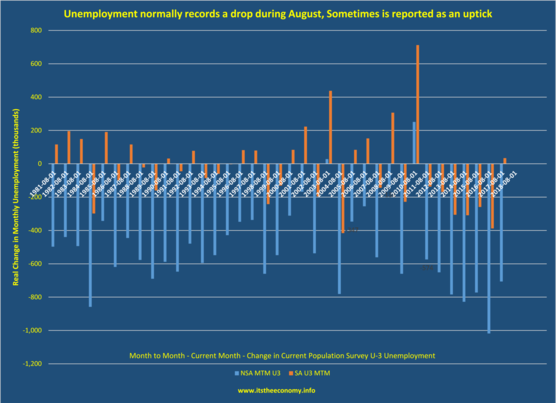