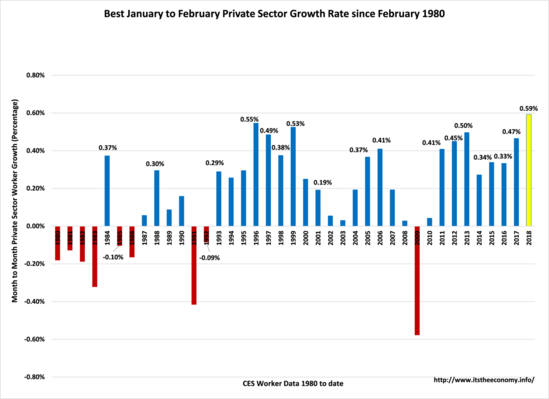 The February Employment Situation Report, or Jobs Report, is created by using two different data sets: The Current Population Survey (CPS,) or Household data, and the Current Employment Statistic (CES) or Establishment data. The CPS data measures the level of full-time jobs, part-time job, unemployed workers, and the workforce population. The CES data measures the number of workers. The headline CES data is the seasonally adjusted data for non-farm payroll. The number that President Obama used to create his streak was the total private sector data. This data excludes the government jobs. The total private sector data is comparable to the ADP payroll data.

Last month there were significant revisions to the seasonally adjusted (SA) and non-seasonally adjusted (NSA) CES data. Last month the  CPS data boosted the workforce population  more than it has done during the past two years. The same thing can be said this month with regard to the ADP data. The February ADP Report had data published that accompanied the report. The SA ADP Payroll data was revised from 2002 through January 2018. These revisions meant instead of the payroll hiring accelerating month to month and February to February that there were some declines measured. The media ignored the situation where the February 2017 data was revised up to almost 300,000 jobs and the January 2018 data was revised up to 244,000 jobs.

Last Friday this column produced an article that projected strong Worker Growth and Strong Job Growth. The February Jobs Forecast article  "February Jobs Forecast: More Strength" projected worker growth comparable to February 2012, which was similar to February 2017. It also projected another drop in the seasonal factors used to convert the NSA CES data to the SA CES value that will be reported. A lower seasonal factor lowers the SA CES value that is reported.  That same article also projected NSA CPS growth comparable to February 2016 and February 2017. It was projected that the U-3 unemployment level, non-seasonally adjusted would drop, potentially to a level lower than February 1998 and possibly lower than February 2001. The combination of a serious surge in jobs and a significant drop in unemployment means that the NSA participation rate should surge higher.  So what was recorded and what was reported this February?

Real, non-seasonally adjusted, jobs skyrocketed by 1.556 million jobs. The Current Population Survey data recorded 966,000 more full-time jobs than January 2018. The number of part-time jobs jumped 590,000 jobs. When the forecast article was written it was projected that we might meet the job gains during February 2016 and February 2017. This data is breaking the mold.

The workforce participation rate is rebounding, again. This is not a small feat. The non-seasonally adjusted unemployment rate fell from 4.49% to 4.39%. The Participation rate jumped from 62.32% to 62.85%. President Obama saw his unemployment rate fall as his participation rate fell. It was promoted in the media that this is as a result of older workers dropping out of the workforce, not working, and still being counted in the workforce population. This column has detailed that they are, in reality, working longer. Unemployed workers are participants. If they are not working, and they are not unemployed, they are missing participants.

This jobs report was phenomenal. It was remarkable. It was outstanding. It is a little confounding that the unemployment level did not fall more than it did fall. We know that the February first-time unemployment claims levels recorded record low levels for the first, second, third, and fourth week of February, non-seasonally adjusted. Continuing claims are not quite at the same level. Where are the jobs being created? How are men doing compared to women? Are younger workers getting into the market. How is President Trump doing compared to Presidents Reagan, Clinton, George W. Bush, and Obama. All that and more will be revealed next week. 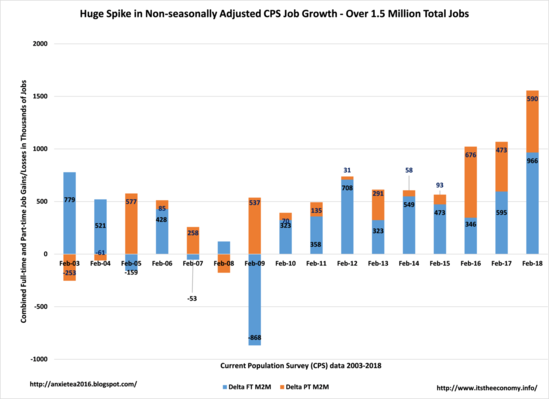 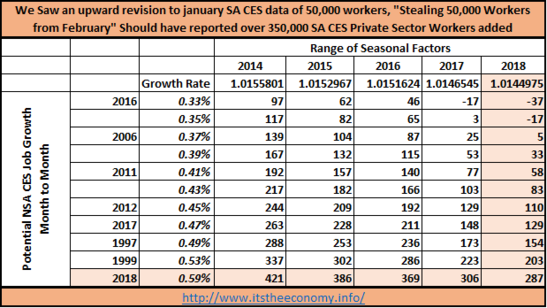 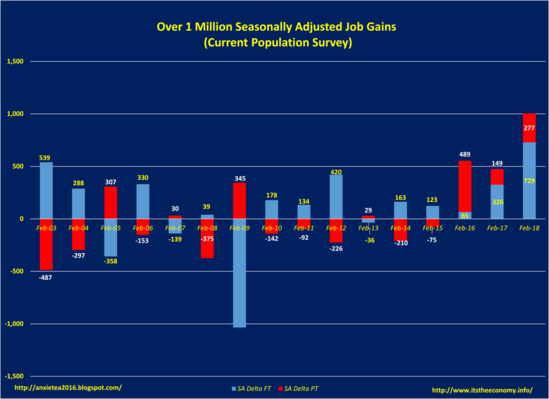 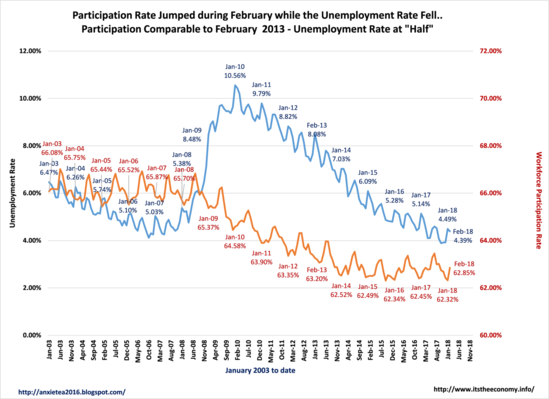 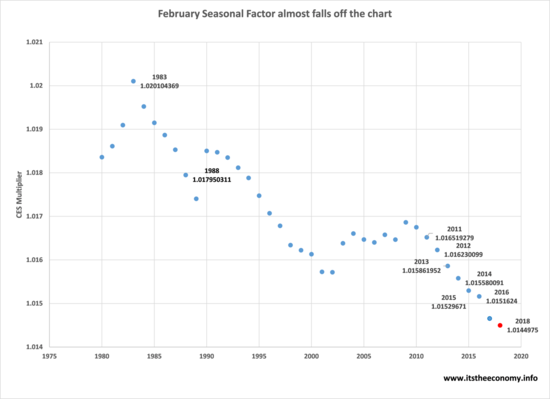