Is the Best January Retail Month Ever Not Good Enough?

Non-Store Retail Sales Soared this past month. There was a considerable amount of good news in this report. The data indicates that all the sectors saw improvement over last January except "Sporting Good and Hobby." The year to year data shows January 2018 vs January 2017 gains of over 6% in Home Furnishings, Building Material Garden Equipment (BMGE,) and Miscellaneous Store Retail. That growth was dwarfed by Non-Store Retail (NSR) which eclipsed Food and Drinking Place sales this month.

December sales were revised downward. This is no big deal. We see regular revisions to the data. The annual growth rate for all of 2017 was 4.44%. This year, the rolling growth rate for the past twelve months, is 5.09%. The largest revisions were to the Electronic and Appliances, Clothing, and Sporting Good and Hobby sales. These sound like Christmas returns hitting the bottom line during January. Those returns should turn into future sales once the "gift cards" are used.

We had the best total January Retail sales month ever. Ever. There were over 444 billion dollars in total sales during January. This eclipsed last year's January record level of 423 billion dollars. All sectors except Electronics and Appliances are out of the recession. This should be no surprise to regular readers of this column. Some sectors have been below the current month 2007 levels since 2007. Some sectors recover and then fall back. This is good news.

The reports record good news and report lackluster data. Why? We need a closer look at the data by the media. 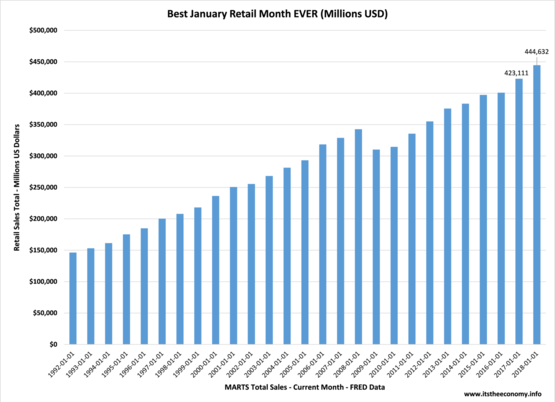 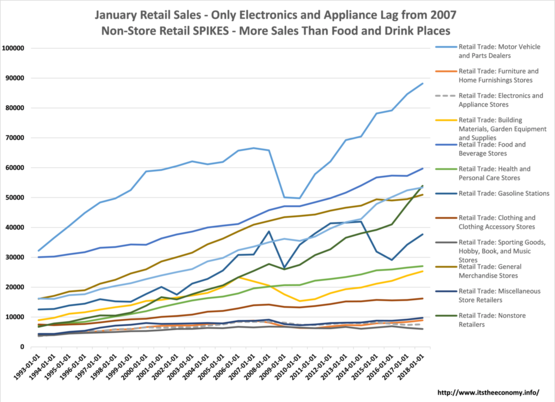