The easy headline is that December Sales Dropped From Last December

If you listen to other commentators you may hear that this December was a bit of a disappointment for New Home Sales. The average sales price dropped from last December. The number of units were slightly lower than last December. This is just one month. What was recorded and what was reported are different things.

The Average Sales Price for the month of December dropped to $377,000. This is still roughly $100,000 more than the average sales price for existing homes. The difference has to do with square footage, amenities, upgrades, and the cost of land. If you examine table 1b of the report you will find that there is a wide range of average sales prices during the past 13 months.

The End of the Year sales data was the best since 2007, better than 2008-2017. There are many commentators who are pulling the "I remember  when sales were over 1 million units" shtick. Units sold plummeted to historic lows during 2009 and 2010. New home sales to not recover overnight. Most new home sales are created by people selling their existing home and building their dream home.  Existing Home Sales also cratered during 2009 and 2010. We  saw a mini-peak during this past Summer. What followed were interest rate hikes and a Government Shutdown. It is possible that the slowdown in sales this month was due to a slowing loan approval process due to the Government Shutdown.  Will we see a bump in January new home sales?

The New Home Inventory has risen substantially during the past year.  last year we had 294,000 units for sale at the end of December. This year we have 343,000 units for sale. People cannot buy homes that are not available for sale. The report indicates the levels of purchase for those homes not started, under construction, and completed.  The "sold while under construction" and "sold when completed" data both rose compared to 2017. This should mean that we will see higher sales this year than we saw last year.

This data was a little weaker than projected on this website. It is possible that extremely cold weather and the Government Shutdown may have impeded sales during December. It is also important to remember that new home sales often mean other types of sales follow: New furniture, new appliances, new home and garden equipment, possibly a new car for the new garage.  New construction also generates new jobs in Retail, Construction, and Professional Business Services. This was a good report. Goldilocks would be happy. 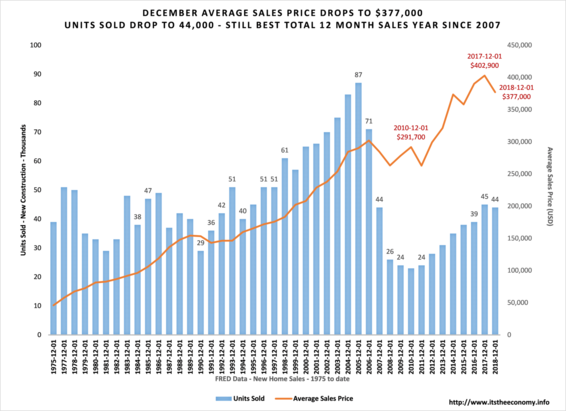 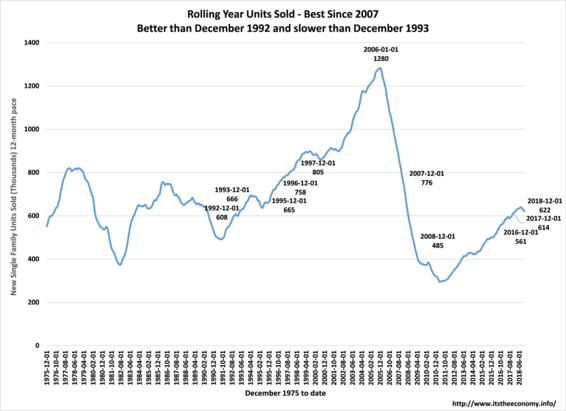