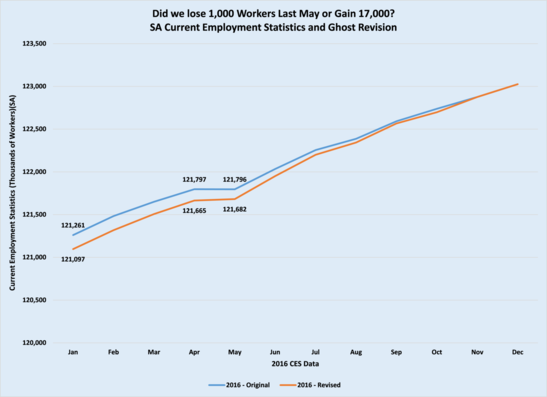 Last June this column discussed how the April Private Sector Jobs data had to be revised down by 37,000 claims so that the May data could grow by 38,000 claims. Last June this column published an article that detailed how the revisions to the May data meant that we lost jobs during May - nobody else caught it. Those bits of data never improved for the rest of the year - officially. The data that is released this upcoming Friday will be the advance May values. Next month we ill receive the preliminary values for May. We will receive the "final" revisions to the May data with the release of the August jobs report.  The data continued to show negative seasonally adjusted growth based on the final April Value and the Final May value. The impetus of this current article was a Tweet I received last month when someone told me the "Streak was still alive." Sometime recently, prior to last month, the data from January through October were revised - just not November and December.

Did we Grow at 0.54% or 0.55% Last May? It was the slowest pace May 2008 and May 2009. Was the seasonal factor changed to cover the tracks of the changes, plural. If the data from the prior month is revised down then its gives the current value a boost. Had the original April 2016 SA CES value stood then the original May 2016 data would have showed a drop of 37,000.The Drop of 58,000 between the April Advance and April Preliminary value of 58,000 allowed for an increase of 25,000 between April and May. The June revision of the April and May data meant that the Advance change of +25,000 was revised to a downward tally of 6,0000 workers. The July final revisions of the May data higher by 5k meant that there was still a loss of 1,000 jobs between April and May. The streak ended during May with the June revision and was conformed by the July revision.