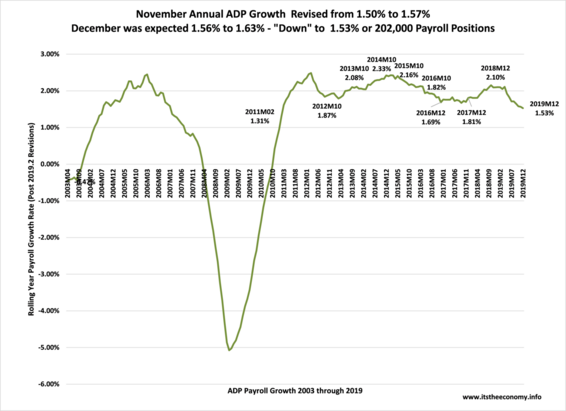 Today it is the December ADP Report

Last month the ADP Payroll report surprised to the low side while the November Employment surprised to the upside, both in revisions and raw numbers. The seasonal factor skewed the CES data lower than it could have been reported. Was the November ADP data revised higher this month? What sectors will see the best growth?

Month to Month growth is expected in all sectors. The largest growth was expected in Construction (0.40%-0.70%,) Professional Business Services (PBS,) Education and Health Services (EHS) and Leisure and Hospitality (LAH,) all rising 0.15% to 0.30%, and Trade, Transportation and Utilities (TTU,) Information (IT,) and Financial Services (FIRE,) which are expected top grow 0.10% to 0.15% month to month. The only question mark was if we would see a big pop or drop in Natural Resources (M/L.) The combined growth was expected to be in the 0.08% to 0.14% range, or 104,000 to 181,000 payroll positions.

What's up with the Annual creation? We were adding 188,000 positions per month through May. Last month that average dropped to 155,000. We are following a similar creation pattern. this month the upward revisions to October and November, and the 202,000 positions added this December mean that we boosted the month rate to over 160,000 position a both. Remember the revisions to the data that happened with the release of the February ADP report the past two years. Job creation was pushed back from President Trumps to the Obama Administration Era.

Almost 300,000 payroll positions added this month. The 202,000 jobs created during December were in addition to the total upward revisions of 86,817 payroll positions from the prior levels, so this was actually as if 289,000 positions were added from last month's report. We did not see growth in all sectors. That is okay. IT has been a relatively weak sector since the early 2000s. Mining and Logging may have dipped due to lower oil prices.  Will we see another 200,000 handle this Friday with the Current Employment Statistics private sector data. Probably.

The headlines were Missiles, Earthquakes, and a Plane Crash. The  ADP report was ignored until the markets started to soar, and then the market stole the headlines. What will steal the headlines on Friday if we receive a strong "jobs report?" 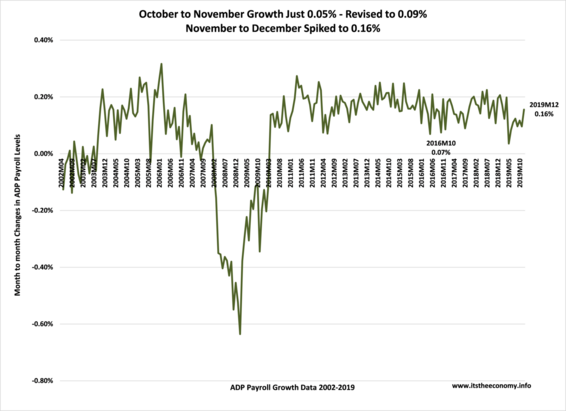