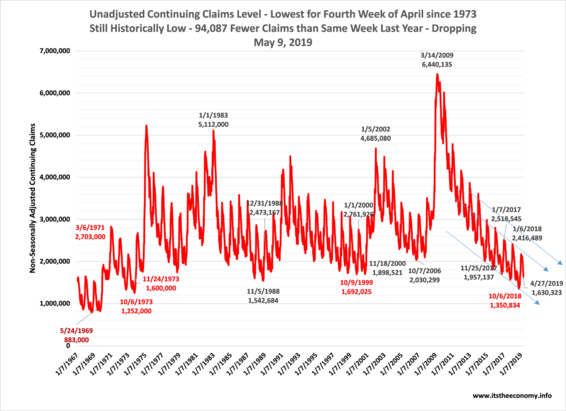 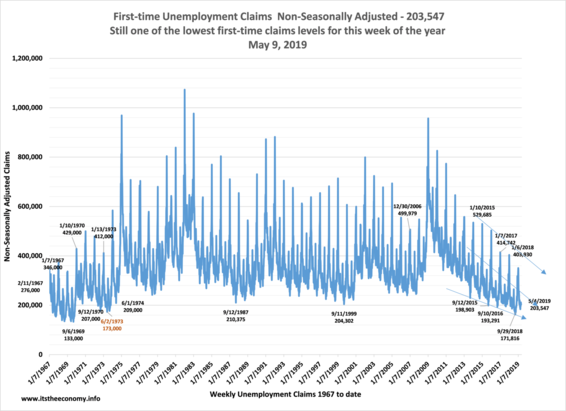 Continuing Claims reflect the underlying strength of the economy

The headline news at the bottom of the hour, most Thursday Mornings, was the seasonally adjusted (SA) first-time unemployment (FTU) claims data. Were we under 400,000 claims? Were we under 300,000 claims? This year we fell below 200,000 SA FTU claims. Ho-Hum. The FTU data feeds into the continuing claims (CC) data. We have been under 2 million SA CC for more than two years. Ho Hum. What happened this week?

The Continuing Claims Data dropped week to week and from last year's level. The NSA CC value dropped from 1,647,873 claims to 1,630,323 claims. This is lower than the lowest recorded between November 24, 1973 and 94,ou087 continuing claims lower than the same week last year.  The general trend is downward through the end of September and the first week of October.

The Insured Unemployment Rate fell to 1.14%. The NSA IUR had not been below1.45% from 1973 through 2000.  The IUR dropped to 1.34% during October 2015, then 1.23% during October 2016. We could drop below the 2017 low of 1.11% within the next four weeks. The pundits are saying that we have more job openings than unemployed workers. The Jobs Opening data is similar to the Current Employment Statistics (CES) worker data. The U-3 Unemployment data come from the Current Population Survey (CPS) data. The official U-3 includes people out of work looking for work. The continuing claims data is people out of work who had been working. Big Difference. Why not compare the continuing claims data to the job openings data? We had 7.271 million NSA Job Openings during March. We had 2.01 Million continuing claims mid-March. Do we have 3.5 jobs per unemployed worker? It is as if you are comparing the inside air temperature in Phoenix, Arizona on August 1st with the indoor temperature of a home in Toledo, Ohio on February 1st. It is non-sense. The same can be said about job openings and U-3 unemployed workers. Different surveys. Different margins of error. Different items being measured. Different seasonal factors.

First-time claims edged lower from 204,787 to 203,547 claims. Remember hat we were "touting" seasonally adjusted claims under 300,000. This is non-seasonally adjusted. It was projected that we could drop below 200,000 NSA FTU claims this week. That did not happen.  This is slightly elevated from last year's NSA FTU of 190,262 claims. Remember that we have 2.2 million more covered insured this week than the same week of May last year. 13,000 more claims for 2.2 million more workers.

The weekly claims data gives us a weekly check up from the neck up. The anti-Cassandras will find the uptick in the SA FTU Claims from 211,000 to 228,000 claims "concerning." It has been incredible that we have seen declining claims with increasing covered insured for as long as we have been recording it. Mark my word: the prognosticators who are proclaiming the Job Openings to Unemployment data will be offset by the "concerned" parties that we are starting to see an uptick in first-time claims. We have a record level of full-time jobs for the month of April. We may see a rise in U-3 eventually simply because of the law of large numbers. 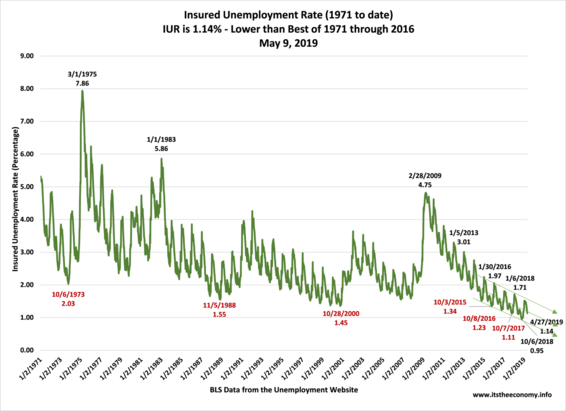