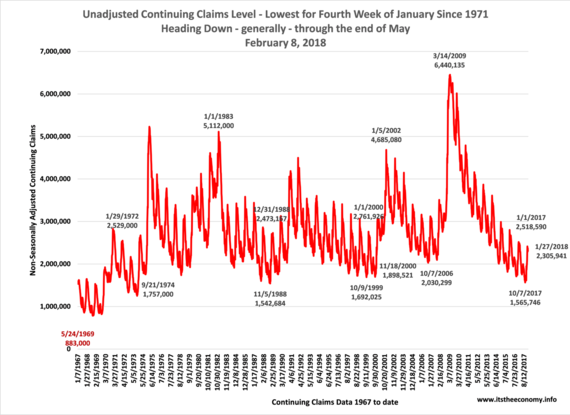 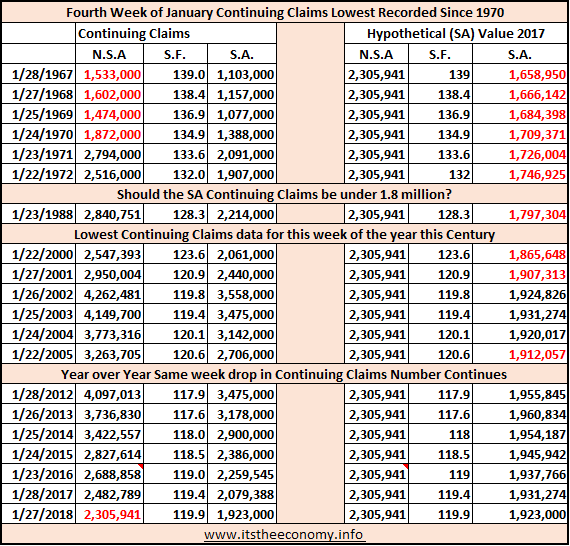 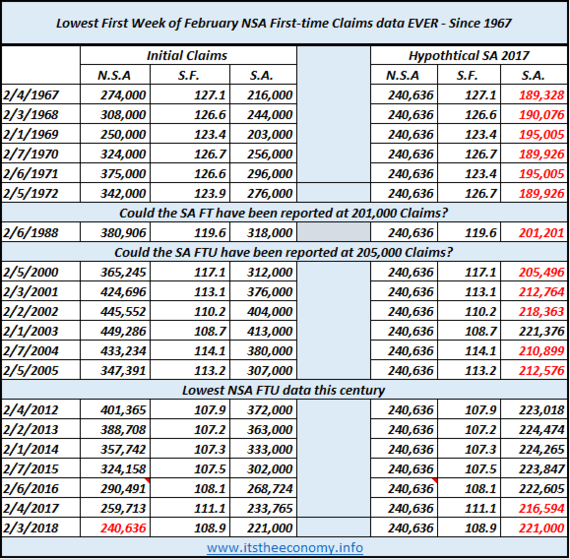 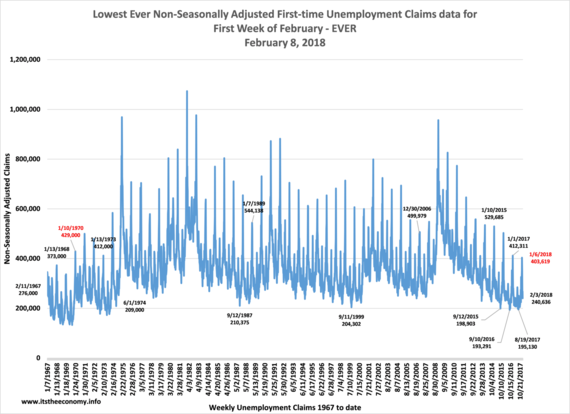 The Most Unloved Economic Indicator

The Weekly Unemployment claims data was released at 8:30 AM today, Thursday February 8th. The data released includes the non-seasonally adjusted (NSA) first-time unemployment (FTU) claims data and the Non-Seasonally Adjusted Continuing Claims (CC) data. The data that is reported, when it is reported, is the Seasonally Adjusted (SA) FTU and SA CC value. The seasonal factors used to convert the NSA data to the SA data changes from week to week, month to month, season to season, and year to year. When seasonally adjusted data from different weeks of the year are compared False Assertions Considered to be True (FACTs) are created. The biggest FACT was President Obama's Private Sector Job Creation streak. The second biggest FACT is the Seasonally adjusted First-time Unemployment Claims Streak. Both of these are covered in the article "Economic Urban Legends." What you need to know is that the trend for both NSA FTU and NSA CC data is downward through May. So what happened this past week?

The Non-seasonally Adjusted First-time Unemployment Claims data is at the Lowest it has ever been for the First-week of February. Ever. The unemployment claims program began during January of 1967.  Last year we had 259,000 NSA FTU claims. This year we had 240,636 claims. We often have had over 400,000 NSA FTU claims during the first week of February. How low can this number fall? Could it drop below 200,000 NSA FTU?

The Seasonally Adjusted First-time Claims data was "reported" at 221,000 claims. The world reported is in quotations because this number has been rarely reported since the election of 2016. If we used the seasonal factors used between 2000-2005 the headline number would have been reported as low as 205,000 claims. If the factor for the first week of February 1988 was applied to today's data then the number would have been reported at 201,000 claims. If we used the seasonal factors from the early years of the program then we would have had a headline number of 189,000 claims. This is fascinating how much this data is being actively ignored elsewhere.

How low can the Continuing Claims fall? There are weekly patterns that are observable in the data. Some weeks the NSA FTU claims pop up a little and the continuing claims follow higher the next week. Some weeks the NSA FTU drops and the NSA CC value falls the next week. The weeks where we traditionally see spikes are often seasonally adjusted into a smoother line. The authors of the report used to publish the seasonal factors months in advance. They no longer publish the data back to the beginning. They no longer archive the reports. The data indicates that we could see the lowest first-time claims data any given week of the year through October. Will we drop below the November 5, 1988 low this October or November? It is possible.

Next week we will receive the FTU claims data for the second week of February. This is important because the data from next week will give a glimpse to what is possible for the official U-3 unemployment number for the February Jobs report. The following week we will receive the continuing claims data for the same week for the month. The Current Population Survey data was strong this January. If you thought that the unemployment claims data for this month was great, the lowest since 2002. Will anybody else catch on to this trend. Spread the word.