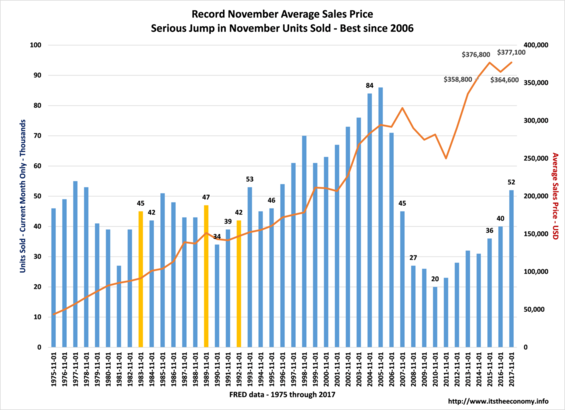 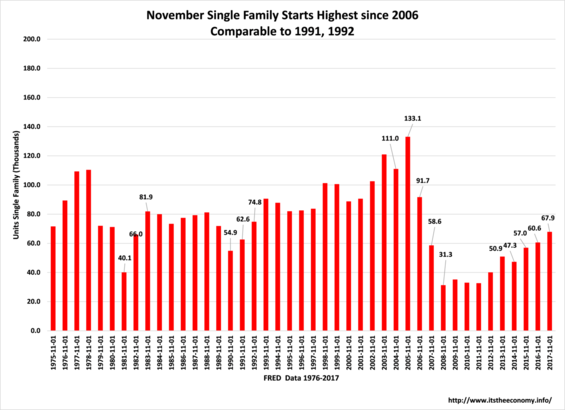 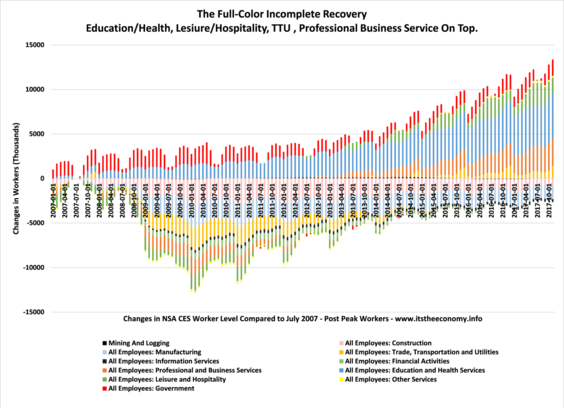 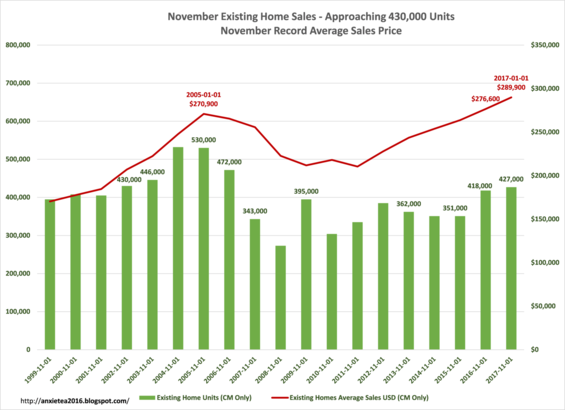 This week was a good week. The tax reform bill was passed and signed into law. People should see more money in their paychecks after the first of the year. A Continuing Resolution was passed to keep the government running through mid-January. We received remarkable housing and construction data. We received incredible weekly unemployment claims data. There was even some time to dig into the November Employment Situation report data, again.

(Dec 18) This week began where last week left off. The first article of the week examined the November Employment Situation report as it pertained to the various sectors of the labor market. "November Sector Surge in Workers" There are four sectors that have not recovered to pre-recession levels: Mining/Logging, manufacturing, Construction, and Information Technology. We saw solid month to month non-seasonally adjusted CES worker growth during November. This was the second best growth rate November since 1980.

(Dec. 19) This week was a big week for real estate data. Tuesday morning, early, the "November Real Estate Forecast" article was released. The data indicated that we should see solid new construction start data, new units under construction data, and surging completions data. It was also projected that we would have a spike in new construction sales and the potential for a new construction record Average Sales Price for November. A similar projection was made for the November Existing Home Sales data.

(Dec. 19) Tuesday we received the New Construction data. "Nov. New Construction: Expansion Continues" found that Starts Soared, Under Construction data edged higher, and that completions, while lower than November 2016, exceed completions for the month of November from 2007 through 2015. We have exceeded the number of single family starts for 2016 with one month remaining. We are 16,000 units units short for single family starts from where we ended 2016 and we are 88,000 units ahead of where we were last November.

(Dec. 20) Wednesday we received the Existing Home Sales data. The November 2017 data was better than every November after November 2006, The article "November Existing Homes - Sales up, Inventory Down" examined the unadjusted data and found good news. The only problem is that there is a lack of inventory.

(Dec. 21) Thursday we received some of the best unemployment claims data for the current week of November that we have seen since the unemployment benefits program began 50 years ago. "Weekly Unemployment Claims Matter." The First-time Claims number was reported at 245,000. They could have reported it between 226,000 and 255,000. Seasonal factors matter. The Continuing Claims data was reported at 1.932 million claims. The continuing claims data could have been reported as low as 1.879 million claims. The report is full of FACTs (False Assertions Considered to be True.)

(Dec. 22) Friday ended the week were it started with am article of real estate and an article regarding the November Employment Situation Report.  Thursday I was caught up in a conversation on Twitter with some great people and decided it was time to compile the data for the "Red, Gray, and Blue" Aging Workforce article for November.  "November's Aging Workforce" broke down the employment, unemployment, and workforce population data by age group. There is a problem with the 40-55 year old age groups. There is a different kind of problem with the under 25 age groups. There is a different kind of problem for those over 55.

(Dec. 22) If it seems like there is a shortage of for sale signs and an abundance of sold signs, you are right. The same is true for the new homes market. There is a lack of new homes for sale, by historical measures. Even with a shortage of inventory we saw the most November New Home Sales since November 2006 and the highest November Average Sales Price ever. "November New Home Sales - Ho Ho Higher" details how we have already sold more new homes this year, after eleven months than we have since 2008 through twelve months. Inventory is growing. We have a long way to go to reach 2006 and 2006 levels. The authors of the report think we could see over 700,000 units sold during the next 12 months. This article projects 620,000 units for this calendar year and potentially 650,000 for next year.

This is a long holiday weekend even for economists. No articles will be published on Sunday the 24th or Monday the 25th. There is always something to report.  The GDP data revisions were released this week. There is an analysis of Government spending that can be done. Multiple Job Holders for November. Relax. The end of the year will bring a week in review, a month in review and a year in review article.