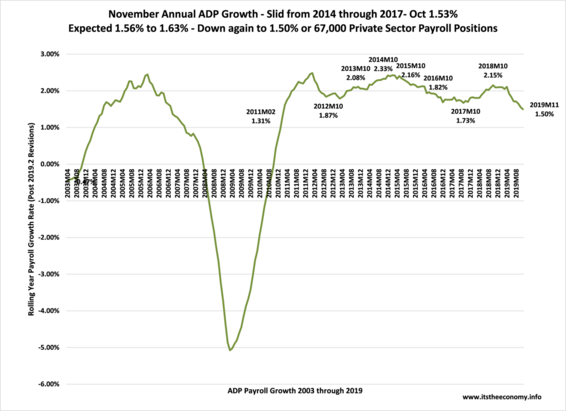 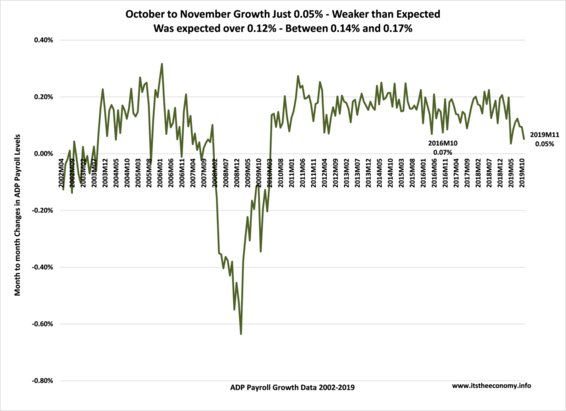 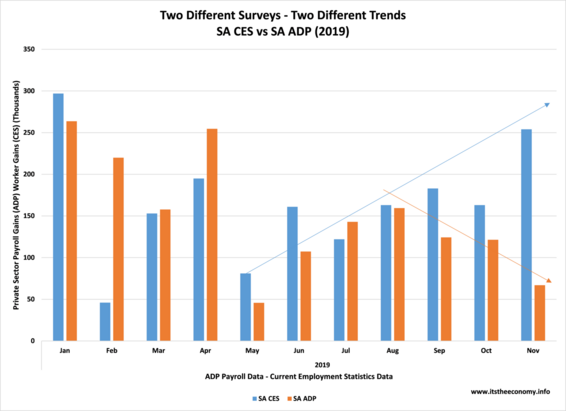 The ADP Month to Month data indicates growth in all Sectors

The ADP December to December data indicates growth in all Sectors

Last month the ADP Payroll report surprised to the low side while the November Employment surprised to the upside, both in revisions and raw numbers. The seasonal factor skewed the CES data lower than it could have been reported. Will the ADP data be revised higher this month? What sectors will see the best growth?

What's up with the Annual creation? We were adding 188,000 positions per month through May. Last month that average dropped to 155,000. We are following a similar creation pattern to that of 2006. We added roughly 170,000 seasonally adjusted positions at that time.

Different data sets - Different Results. The media obsesses over the ADP number and the Employment Situation number. The ADP Private Sector Payroll data is very different from the headline non-farm payroll (NFP) number because the CES NFP includes changes in government workers. The Employment situation report is created using the Current Population Survey (CPS) data on jobs and unemployment as well as the CES data on wages and workers. These three data sets, ADP, CES, and CPS, have different sample sizes and different margins of error. The ADP Private Sector data rarely aligns with the CES private sector data. The seasonal factors used to create the seasonally adjusted CES data change by sector, month, and year. Seasonally adjusted ADP worker growth peaked during August. November was a huge month for the CES data where over 250,000 private sector workers were added. . This could not be said regarding the paltry 67,000 payroll growth according to ADP.

The media may be anticipating 150,000 ADP payroll positions added this month.  This would coincide with a month to month growth rate of roughly 0.12% and an annual growth rate of roughly 1.42%. This seem low.Expect a number around 189,000 pre-revisions. The projected growth in TTU, EHS, and LAH make sense. Manufacturing should also tick higher from last month's level. the month to month growth in Mining and Logging (Natural Resources) is the main sector that is in question. IT has been showing a resurgence lately. This month may be a monster number to compensate for last months trick when we received an Employment Situation Treat. Expect a bounce in the ADP number for November. Expect this to pull down the December number a little.A number around 189,000 would be good. Do not be surprised if the ADP number is more like the November CES data and blows through 250,000.