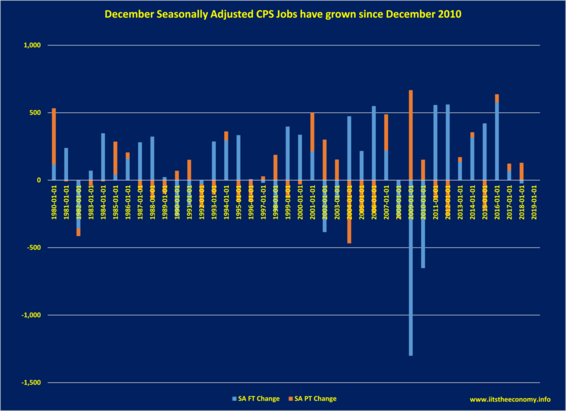 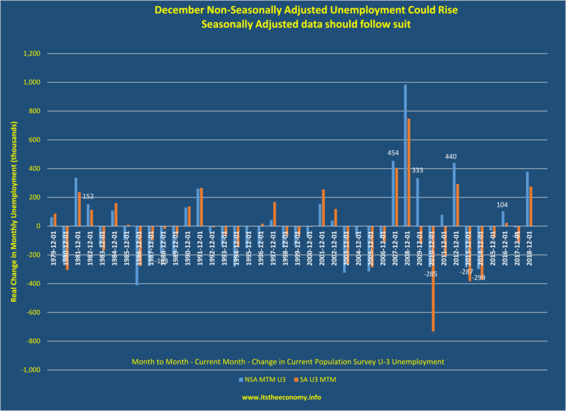 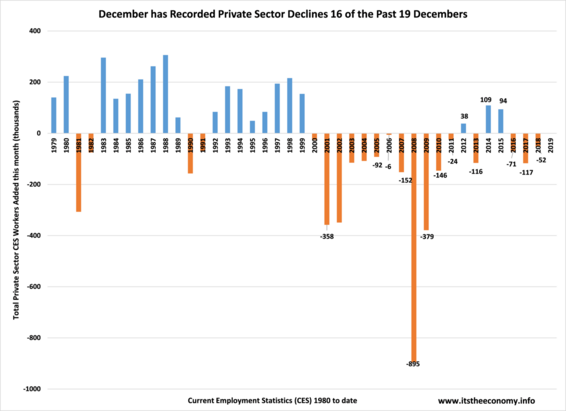 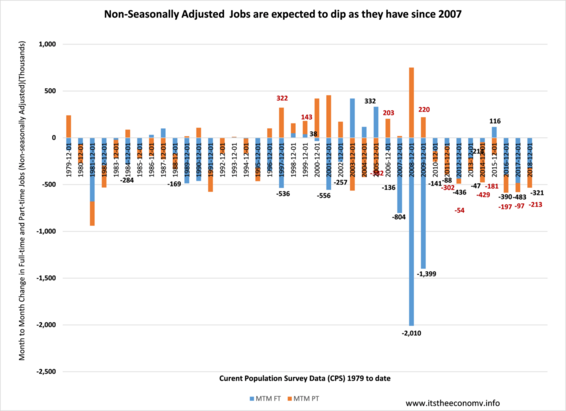 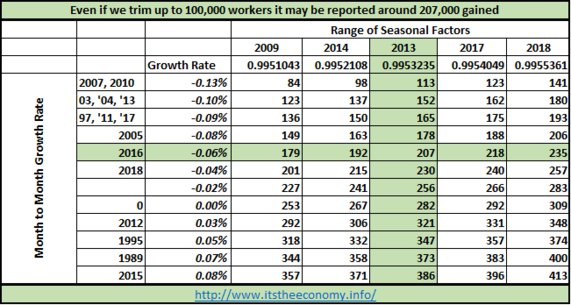 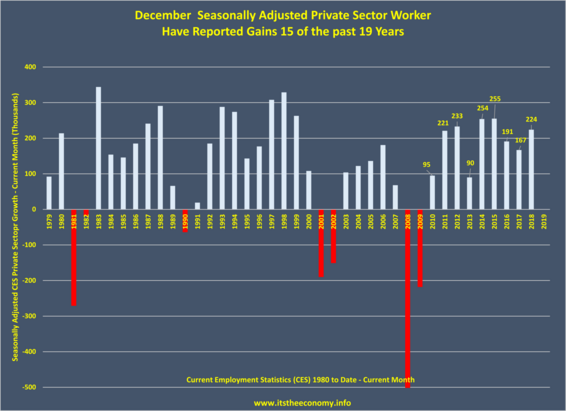 The CES worker Data is Projecting a Reported Gain

The CPS Jobs Data is Projecting

The monthly employment Situation Report, or Jobs Report, is created using two data sets: The CPS (Current Population Survey) Jobs and Unemployment Data and the CES (Current Employment Statistics) Workers and Wage data. They have been out of sync this year with some months having strong CPS data and weak CES data or strong CES data and weak CPS data. Each data set has a seasonally adjusted (SA) component and a non-seasonally adjusted (NSA) component. The values reported are the SA data.The recorded values are the NSA data. What should be recorded and what should be reported this December?

We have record worker losses 16 of the past 19 Decembers. The headline number is the Seasonally Adjusted Non-farm Payroll nor number. umber. The Obama administration streak is/was the Seasonally Adjusted Private Sector Worker number. This column has written numerous articles how the "streak" is an economic urban legend created by changing seasonal factors and revisions. We should anticipate the creation, or loss, of up to 100,000 NSA CES private Sector workers this December. The odds are for a slight decline in the 50,000 to 100,000 range.

We should record month to month growth in Manufacturing, Trade Transportation and Utilities (TTU,) and Financial Services (FIRE.) We should also record net job losses in Professional Business Services (PBS,) Construction, and Government. The non-seasonally adjusted gains in Manufacturing will place us near a level not seen since the Great Recession.

All sectors should report gains this month. The largest month to month gains should be reported in Leisure and Hospitality (LAH,) Education and Health Services (EHS,) Professional and Business Services (PBS,) and Manufacturing. The quest is whether or not Information (IT) gains or Other Services (OS) gains will be reported.

All sectors should report December to December Gains. We could see the largest growth in M/L, as is thought for the NSA data. Other sectors expecting SA Growth over 2% are Construction, PBS, EHS, LAH and Manufacturing

Watch the revisions to the prior data.  We had a huge spike in NSA CES workers last month even after the October data was revised higher from ots advance value. If the November data is revised higher by 50,000 workers then the December data will effectively be lowered by 50,000 workers, from 179,000 to 235,000 workers to 129,000 to 185,000 workers.  The data could even be higher than 235,000 after the revisions because they know that they will be revising the 2019 data down by 501,000 with the release of the January Employment Situation Report.  This was disclosed this past August.

The Current Population Survey Jobs Data indicates that we will report net job losses during December. The last time that there were net NSA CPS job gains was during 2006. We can expect 500,000 to 600,000 NSA CPS jobs lost.

The CPS data also indicates that we should report net job gains. Once again, this is similar to the CES private sector worker data. What is recorded as down will be reported as up. We have reported December net job gains since 2010. This may bolster the participation rate.

Expect to record worker and job losses recorded and gains in workers and jobs reported. Expect minor changes in the Unemployment level to be recorded and reported.  Unemployment should fall. Expect a seasonally adjusted private sector number around 207,000 prior to revisions to the October and November data to deflate this number. We should see December Wage Records. We should see multiple December Multiple Job Worker records.