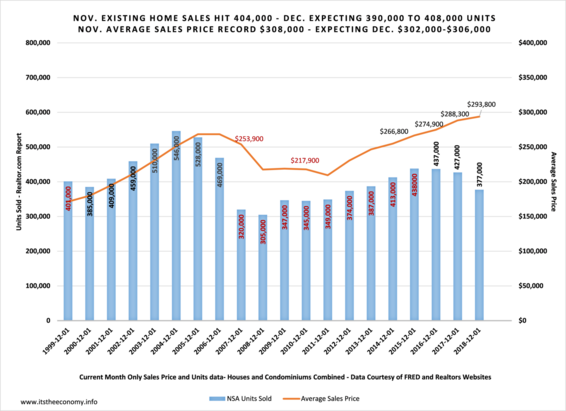 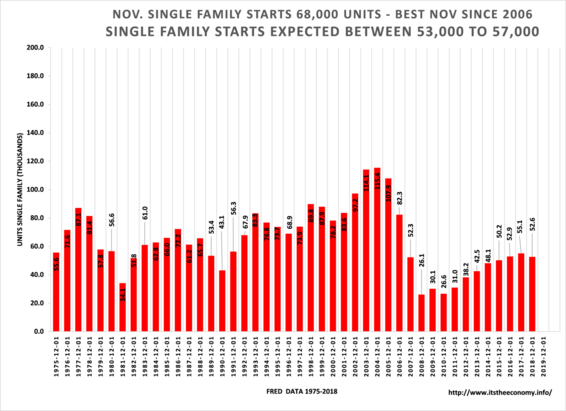 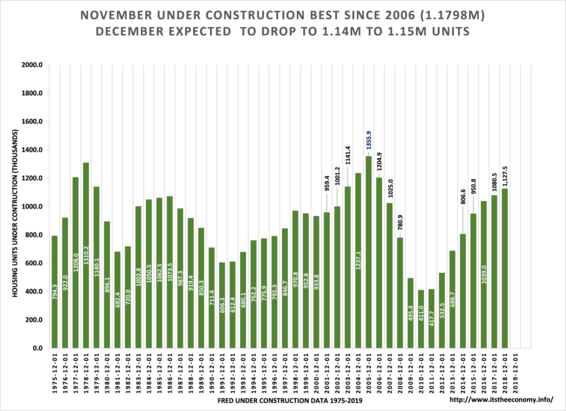 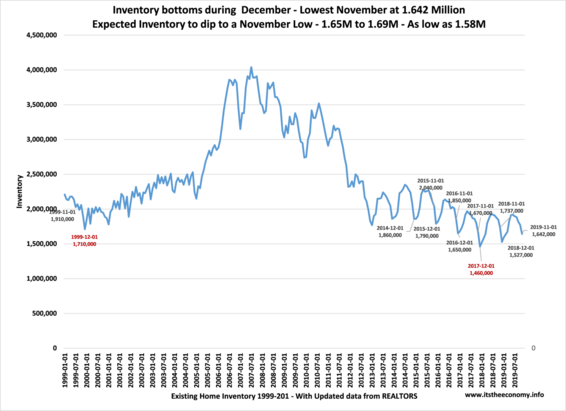 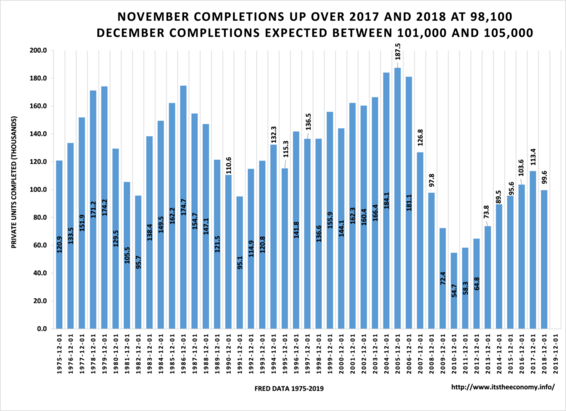 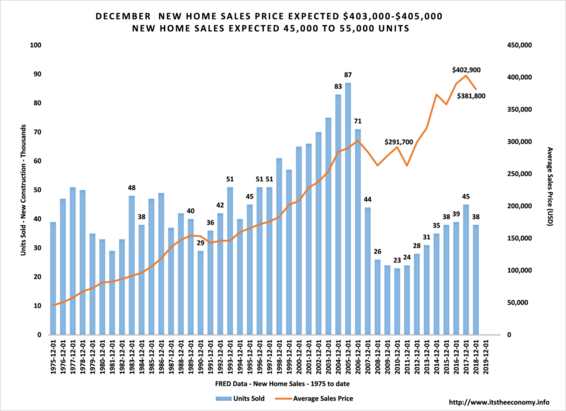 There are three main real estate reports that deserve attention: New Home Construction, New Home Sales, and Existing Home Sales. The largest portion of the real estate market is existing home sales. The sales of existing homes and new homes spur the jobs market and the retail sales market. Last December we had a Government Shutdown that started to influence the real estate markets and the rest of the economy. Watch the data spike from the 2018 levels this month.

This Year new home starts have lagged last year's levels. That may change this month. New home sales have been eating into inventory. Completions have been the story of 2019. Starts data normally dips November to December. We had 68,000 starts during November. They should drop to the 54,000 to 59,000 range. This would be an uptick from last year and the best December since 2006.

Completions are expected to remain relatively steady - a little higher than 100,000 units. We had 98,100 units completed last month and 99,600 last December. Completions could spike by 8% to 18% month to month. This would place us around the recent December peak of December 2017, or roughly 105,000 to 115,00 units.  We normally see something around a 2% increase in completions December to December, or roughly 96,000 to 101,000 units. Month to month growth normally impacts annual data and is a better indicator. Expect something around 110,000 units.

New Home Construction feeds into new home sales. Sales have exceed 50,000 units, and even exceeded 60,000 units, each month since February 2019. Sales normally drop up to 10% between November and December and can increase up to 2%. Some people want to start a new year in a new home by closing during December. The month to month data is projecting sales at just 47,000 units. This would be a considerable improvement from last December's 38,000 units. Anything over 45,000 would be the best December since December 2006. A number between 47,000 and 51,000 units sold.

Inventory normally rises during December. Inventory normally rises month to month and December to December. We hit a recent peak this year when we hit 349,000 units during January. This was up slightly from 348,000 during December 2018 and 341,000 November 2018. Inventory should rise from 327,000 to 337,000 units as builders prep for the Spring Market. Demand may be spurring builders to boost completions and inventory for sale. We could hit 347,000 units. There is the outside possibility that we will break through 350,000 units.

The New Home Sales data may surprise some people. Last December the sales data was negatively impacted by the Government Shutdown. This shutdown also slowed new home construction during December and January to almost a halt. This impacted the January sales and revealed itself in higher than expected sales during February through November. The Seasonally adjusted Annualized data has different peaks depending upon category. New Home Starts normally peak during April, May, and June. Completions normally peak during June, July and August. New Home sales tend to peak during March, April and May. This means that the seasonally adjusted annualized data tends to decline after June for Starts, August for Completions, and May for Sales. This is the headline data. Expect these data points to surprise to the upside due to last year's weak data during December.

Inventory is expected to drop below 1.527 million units. This is an important number. this would be the second lowest December Inventory level since December 1999. There is the possibility that it could drop to under 1.460 million units. That all-time low was set during December 2017. It is possible that the inventory may set a new record low under 1.40 million. The overall trend has been some improvement since December 2017. There is the possibility that as news of a strengthening existing home market is spread across the country that November was the low for the year. That is not probable. Watch out below.

Existing home sales can spur retail spending and hiring. The economy is improving. We have a record level of December Full-time Jobs. Full-time Jobs have been rising for years. We finally eclipsed the July 2007 level of full-time jobs during February 2017. It normally takes two years of consistent employment to qualify for a mortgage. We are seeing prosperity in all metropolitan areas for the first time since 1992, according to an article in Bloomberg. This data is for 2018. This past year was better than 2018 for jobs, wages, and unemployment. This could be the beginning of an expansion that we have not see in over a decade. The period between 2007 and 2017 was a recovery, not an expansion. We are not back to sales levels seen during 2000 or 2001. We are lagging behind 2015 and 2016. Inventory matters. Retail sales are at a record high. This confidence may spill over to the housing market.