We were on track for our second consecutive $6 trillion MARTS retails sales year. The Monthly and Annual Retail Trade Survey (MARTS) report has reported eleven consecutive months with Seasonally Adjusted (SA) total MARTS sales over $500 billion a month. The Non-seasonally adjusted (NSA) MARTS data has been recorded over $500 billion a month eight of the past nine months. Last December the record $563 Billion NSA MARTS was reported as falling short of $500 billion. What happened this month and this year?

Month to month the non-seasonally adjusted data was expected to grow 7% to 17% this month. Last month the NSA MARTS was $538 billion. If we grow only 7% then we would hit $575 billion. A spike of 17% would garner $629 billion in sales. December to December the NSA MARTS data was expected to grow 3.5% to 5%. If we saw 3.5% to 5% growth from last year's $563 billion in sales then we could see $582 billion to $591 billion in sales. The December to December sales could drop for EAS, GASS, and SGHBM. The largest gains are expected in NSR, CAC, Food and Beverage Stores (FBS) and Food a Drinking Places (FDP.)

We had our best retail month ever. We grew at 6.01% month to month and had $597 billion in non-seasonally adjusted retail sales. Electronics and Appliances (EAS,) Sporting Goods, Hobbies Books and Music (SGHBM )and Clothing and Clothing Accessories (CAC) fell and Non-Store Retail spiked, as expected. Non-store retail made up for lost time and broke through the plateau it hit last December.

Current Year data was currently at $5.64 Trillion - up 3.5%. If we grew at this same rate then last year's $6.021 trillion was expected to grow to $6.23 trillion. This would take close to $590 billion in December sales, or December sales plus revisions to the October and November Data. Our current year sales hit $6.237 trillion. The annual growth rate was 3.60%

The Seasonally Adjusted data We have been over $520 billion during June, July, August, September, October and November. Anything reported less than $530 billion would be a travesty, based on the potential for our first $600 billion December. The seasonally adjusted month to month data is a bit disconcerting. Last December we had seasonally adjusted weakness in almost all sectors. The data for Motor Vehicles and Parts (MVP) sales, FHF, EAS, Food and Beverage Stores (FBS) and Health and Personal Care (HPC) Sales could grow or contract. Normally the data points one direction or the other. Ironically, the BMGE sales is expected to grow seasonally adjusted. Month to month sales are expected to expand by 0.3% to 1.06%, or from $529 billion to $559 billion. Expect something closer to $535B to $545B based on the month to month growth.

The seasonally adjusted December to December was expected to grow by 3.5% to 4.5%. Last December we had $499.9 billion in sales. This means that we could hit between $517 billion and $527 billion in sales, based on month to month growth. Remember tat his would be our first $500 Billion dollar December and the first time that we had 12 consecutive months of SA MARTS sales over $500 billion. The sectors to watch here were Non-Store Retail (NSR) which was expected to grow 8% to 13%, Food and Drinking places,  4%-8%, and General Merchandise, 1% to 3%.

The current year sales are at $5.719 Trillion. If we just grew at the average monthly rate we would have hit $6.228 trillion, or an increase of $519B. Last year the seasonally adjusted MARTS number was just $6.02 trillion. This year we hit a record $6.237 trillion in sales.

We fell $3 billion short of our first $600 Billion MARTS retail month. It does not appear to have registered with the Legacy Media. The Legacy Media who have been reporting record Black Friday Sales, Record Small Business Saturday Sales, Record Cyber Monday Sales, and a record $1.1 trillion November-December holiday sales. We have now had 20 consecutive months with seasonally adjusted MARTS sales over $500 billion after the December 2018 data was revised up to $500.455 billion. We "recorded" our best December MARTS ever, almost broke through $600 billion for the first time ever, on a non-seasonally adjusted basis. The retail market appears to be accelerating. 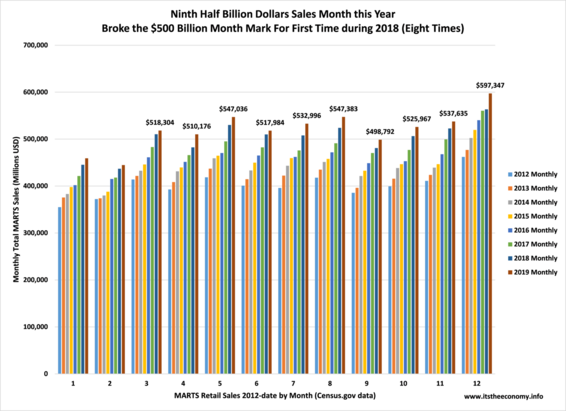 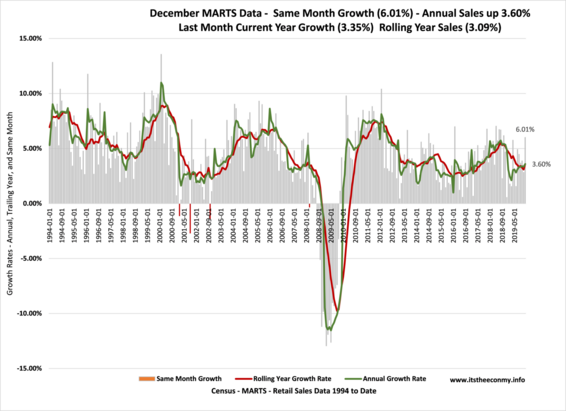 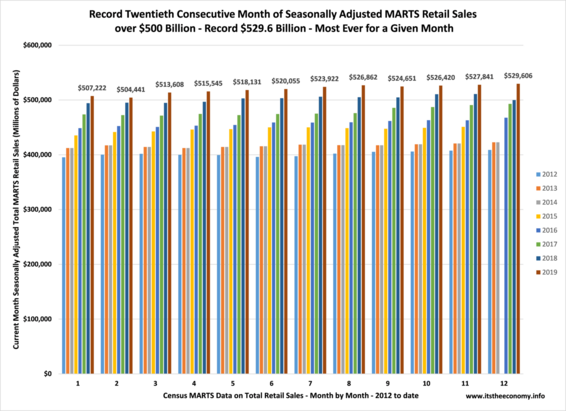 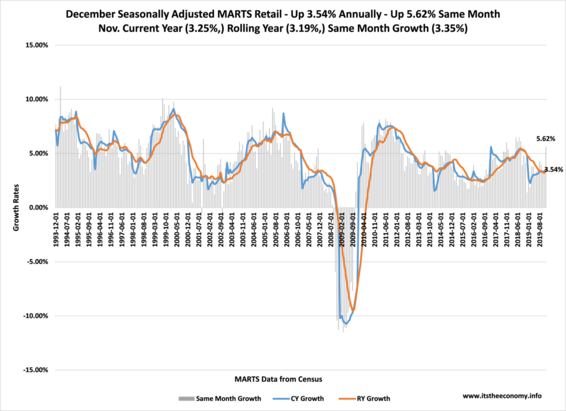 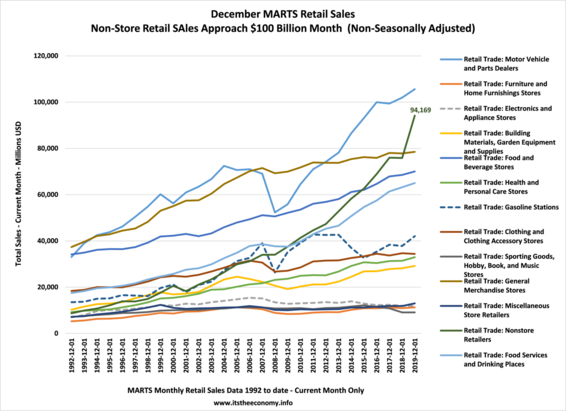