We were on track for our best retail sales year prior to the Government Shutdown. Preliminary data was that Visa/Mastercard saw a spike in purchases and possibly the best December Retail Sales Month ever.

Month to Month the non-seasonally adjusted data was expected to soar for all sectors except Home and Building Goods and the Gas Sales Sectors. It was expected to  see non-seasonally adjusted sales surge for Clothing, Sport Goods, Hobbies, Books and Music (SGHBM,) General Merchandise (GM,) and Non-Store Retail (NSR.)The data indicated a potential spike of 30% to 40% for clothing, 40%-50% for SGHBM, 20-30% for General Merchandise, and 8%-18% for NSR.

We saw a drop in Home and Building Goods sales as well as Gasoline Sales recorded, as expected. Clothing spiked 34.71%, Sporting Goods and Hobbes spiked by 29.36%, and Non-store Retail jumped 10.25%. General Merchandise disappointed at just 1.48%

December to December sales were expected to appear weak by comparison. It was possible that General Merchandise, Health and Personal Care (HPC) and Electronics and Appliances (EAS) could go either way, up or down. Food and Drinking Places, as well as Food and Beverage Sales were expected to show strong sales due to holiday parties. Clothing could rise 2-3%, GM could rise 1-4%.  Watch the Furniture and Furnishings numbers and NSR.

The difference in the seasonally adjusted data will have to be examined in more detail. It is not uncommon for up to be reported as down or down to be reported as up in Government reports. The data did not grow as much as anticipated December to December. Part of this could be attributed to the government shutdown.  Some consumable sales like food and beverage stores and food and drinking places might not rebound. The other sales may have been deferred until January or even February. We are growing at over 5%.Normally this cycle continues for two years at a time. We are barely into our first 6 months.  This was awesome data that was maligned. 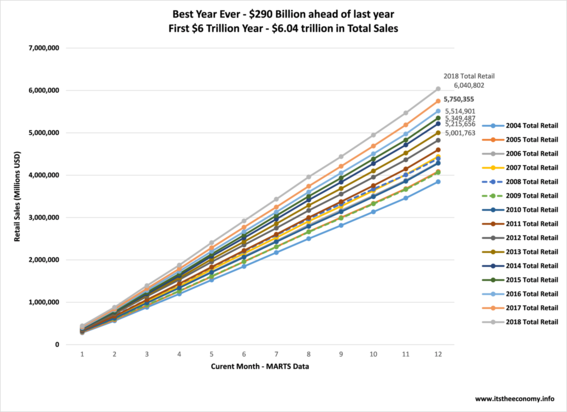 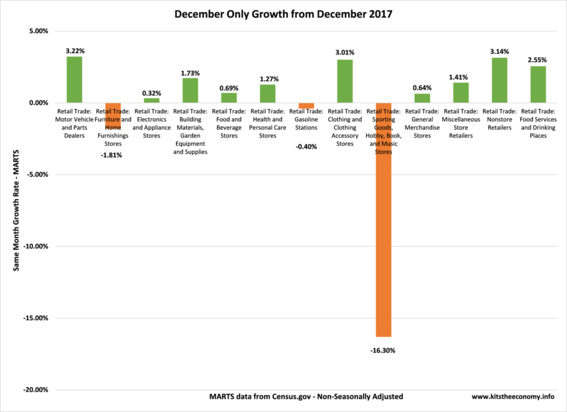 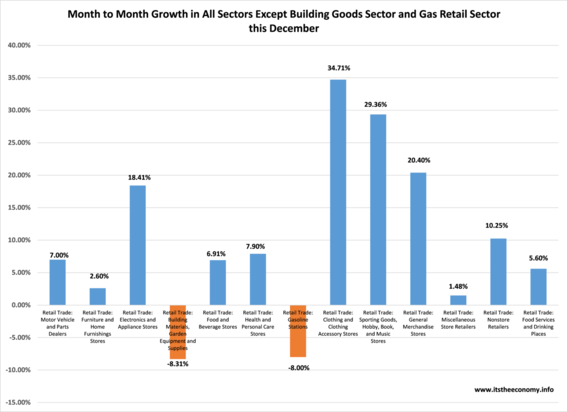