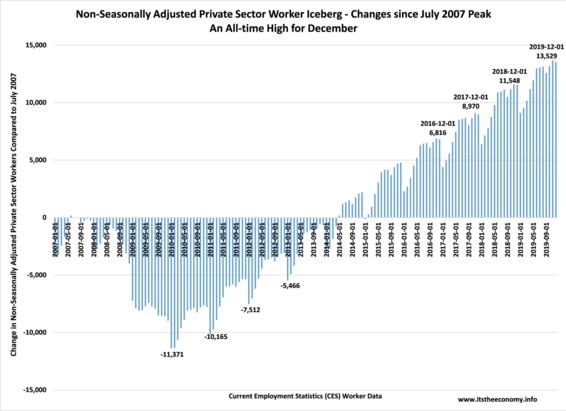 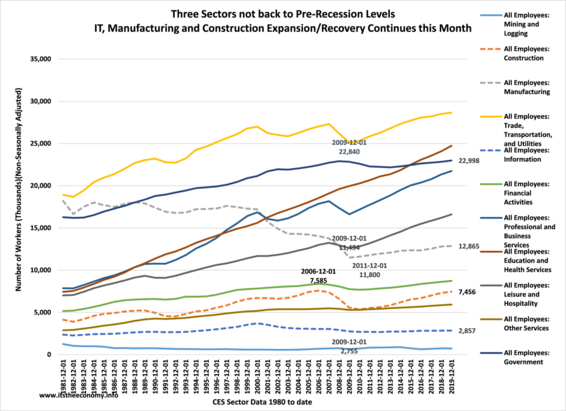 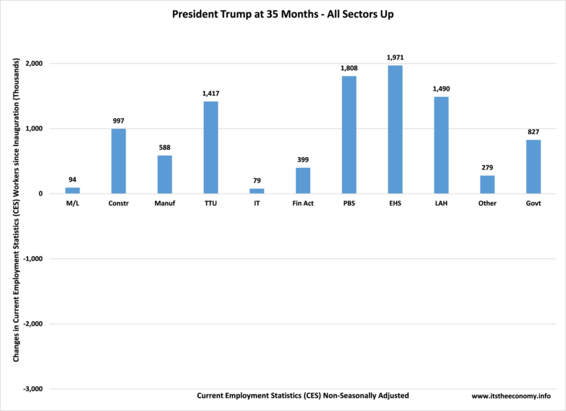 This month we received the first wave of the final economic reports for 2019. We received the December ADP Private Sector Payroll Report, Weekly Unemployment Claims Data, and the December Employment Situation Report. The December ADP report surprised on the high side. The December Employment Situation Report was moderately good, with a record level of December Workers (Current Employment Statistics - CES) and a record level of full-time jobs (Current Population Survey - CPS.) This was covered in the article "Dec. Jobs Report: Santa's Surprise." How did various Sectors do? What happened with workers, hours worked, and total earnings?

The recovery in Manufacturing, Construction, and Information continue to move forward. These three sectors still lag behind where they were prior to the recession. Housing growth slowed during 2006 and bottomed during 2010 and 2011. Information peaked during 2000. The last time we had this many information sector workers (IT) during December was December 2009. We are knocking on 13 million level for  manufacturing workers in the economy. There have been 997,000 Construction jobs, 588,000 Manufacturing workers, and 79,000 Information Sector jobs added since January 2017. All Sectors have added workers.

All Sectors, except Mining and Logging recorded and reported December to December gains in workers. This is often overlooked by others commenting on the economy. The month to month data gets the headlines. The seasonally adjusted data, the data reported, gets the headlines while the data that is recorded, non-seasonally adjusted, is ignored. The largest growth rates were in Education and Health Services (EHS,) Professional and Business Services (PBS,) Leisure and Hospitality (LAH,) and Construction. Three of these sectors have the highest monthly hiring rates, separation rates, quits, and job openings, according to the monthly JOLTS (Job Openings and Labor Turnover Survey) data. Those three sectors are PBS, LAH, and EHS. These same sectors also reported the largest growth rates, seasonally adjusted.

Every Sector received average hourly wage increases this year. Hourly wages rose 1.79% (Leisure and Hospitality) to 5.41% (mining and Logging.) The total average wage was 2.83%. Hours worked dropped or remained unchanged, on average, for all but one sector: Education and Health Services. The combination of higher wages, even with fewer hours worked, boosted total earned wages up in all sectors. Annual wages rose between 1.01% (Mining and Logging) to 5.73% (Professional Business Services.)

Every sector, excepting Mining and logging, grew December to December. Every sector, including Mining and Logging, saw total earnings rise. We have more non-seasonally adjusted workers now than we have ever had working during the month of December this December.  Manufacturing, Construction, and Information jobs are increasing after years of declines. The four sectors with the most job openings (TTU, PBS, EHS, and LAH) have had the most gains since President Trump took office. Construction comes in at fifth in worker additions. Government comes in at 6th place. Manufacturing comes in at 7th place. How is President Trump doing compared to his predecessors? "Five Presidents at 35 months" will cover that question.