How to Project where we might have ended the year?

We have missed one New Home Sales Report and we are likely to miss a second one.  We do not have the data from November to use to calculate the November to December Change. The Rolling Year data is projected further on the same path, and the current year data will be "averaged" between the two months, even though we know that there can be a surge during December.

New Home Sales could have gone either way by four percent from the October Level. New home sales could spike by 3% to 13% from the level recorded during December of 2017. The overlap is in the 44,000 to 46,000 range. The  Current year growth and rolling year growth have been in the 6%, 7%, and even the 8% growth rate range this year.   The current year data indicates that we might see 48,000 units sold. The Rolling Year sales points to a possibility of 55,000 units sold. When the rolling year is greater than the current year growth rates, this indicates a possible slowing of the sales market. This is called Winter.  Expect 97,000 to 111,000 homes sold during November and December.

New Home Sales Price should set a December record. The two month range of change is plus or minus 4%. The annual rate of growth is 3% to 6%. We know that shelter cost have been rising by over 3% this past year. We know that construction workers are "getting raises" based on the monthly wage data. We should exceed last December's $402,900 average sales price (ASP.) Will we hit $414,900? It is possible. Expect something over $409,000.

Are the new construction and new home sales essential or non-essential reports? Today we missed the MARTS retail report. Did you miss it? If these reports are essential then the workers who create them are essential. The economy is going well. Maybe others will revisit the value of these reports after they are released. Get ready for a massive article. 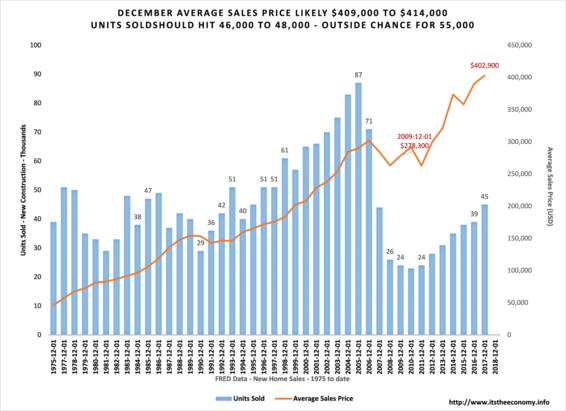 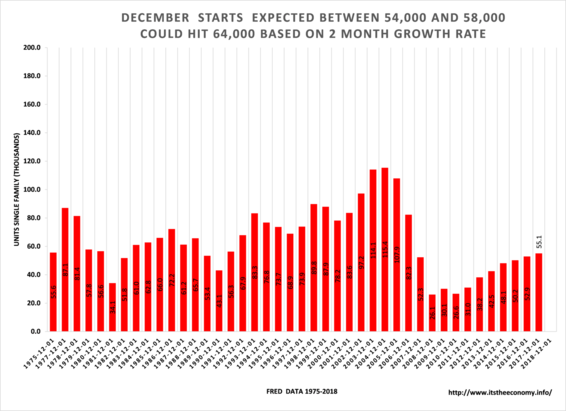 The Government Shutdown May Shutdown New Home Data. Not "Essential?"

Existing Home Sales have been held back by a lack of Inventory. We have set record low inventory levels for the current month data since December of 2015. We did not have as many homes for sale during July 2017 as we had during July 2016, and that was fewer homes than July 2015. This year that trend started to change. We will see if we have more homes for sale this December than we had last December, which was an all months record low going back to 1999.  Inventory is expected to drop significantly month to month. There is the possibility that it could grow 1% from last December's value. It should be expected somewhere between 1.489 million and 1.596 million units. If the inventory drops by 200,000 units, as it has during recent years, and with comparable November inventories, we should come in around 1.585 million units and off of last year's record low.

Units sales are pointing towards some strength, relatively speaking. The forecast data can be calculated using same month data, month to month data, rolling year data, and current year data.The Rolling year data is pointing toward a value of 5.421 million for the end of the year. The current year data, due to a slow start and lack of inventory, is pointing toward 5.418 million. This means that we could expect as high as 453,000 to 456,000 units sold. This is unlikely due to the lack of inventory. The month to month and December to December data is pointing to a value between 406,000 and 444,000 units. The "sweet spot" is between 418,000 and 426,000.

As more people return to work and have two years of income history sales should rise. We are also emerging from the "blackout" period for foreclosures and bankruptcies from the worst of the recession. Units sold and inventory could surprise to the upside.

We have November New Construction from which to work.

The New Construction forecast data goes through a similar month to month growth rate, December to December Growth rate, and Current Year and Rolling Year analysis. This month the data was also analyzed on an October to December basis because we have no November New Home Sales data. Contrary to what you may have heard elsewhere, New Home Starts, Units under Construction, and Completions are the best that they have been since 2008. Starts, Units under Construction, and Completions were ahead of where we were during November 2009, 2010, 2011, all the way through November 2017.

We need more new construction. We need new home starts so that we can build the units under construction, then grow our completions, in order to grow new home sales. New home sales are a minor part of the overall real estate market, yet they have a multiplier effect. Often new home buyers are existing home sellers. Often new home buyers want new furniture, garden equipment, and other retail purchases for their new home. New home construction also spurs the jobs market.

December Starts have been sluggish for years - may surprise to the upside. Starts used to exceed 60,000 units during December as builders built their inventory levels for March through September Sales.Starts should come in between 54,000 and 57,000 units using the month to month and December to December Method. Similar values are calculated using the October to December Method.The Current Year growth rate is 3.99% and the Rolling Year rate is 4.38%. This indicates that there could be some slowing and that we will exceed last year's starts level for the year. There is the possibility of 57,000 to 64,000 units started.  The Magic number appears to be 57,000 units, plus or minus 4,000 units.

Units under Construction may drop this year between November and December. Builders are pushing to clear inventory by the end of the year. We have also had growing units under construction (UC) and growing New Home Inventory for Sales this year.  The "UC" data is effectively a rolling year and current year measure. The Annual, December to December, data is trying to push that number to 1.231 million. The same month data has been leaning that way all year. It is more likely that we will fall between 1.145 million and 1.152 million units.

Last month was good, not great. This month will be ignored. Everyone will be playing "catch-up" once the shutdown is resolved. 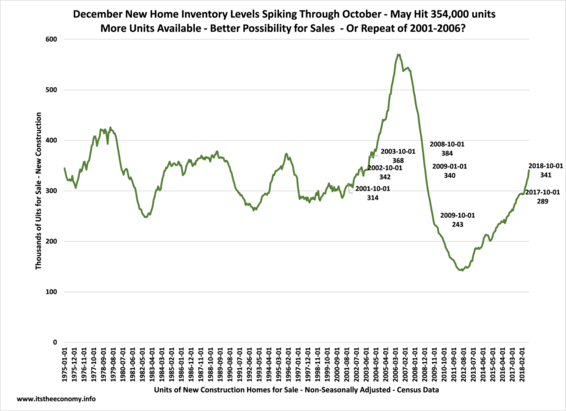 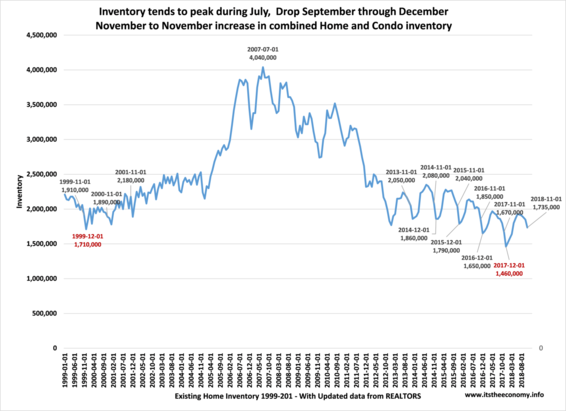 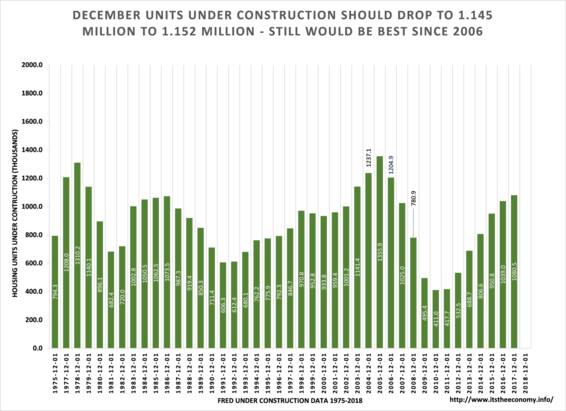 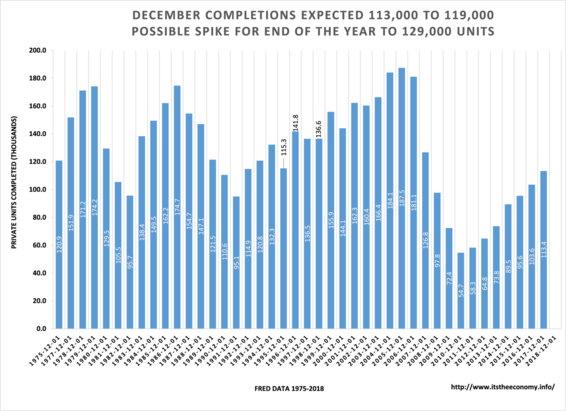 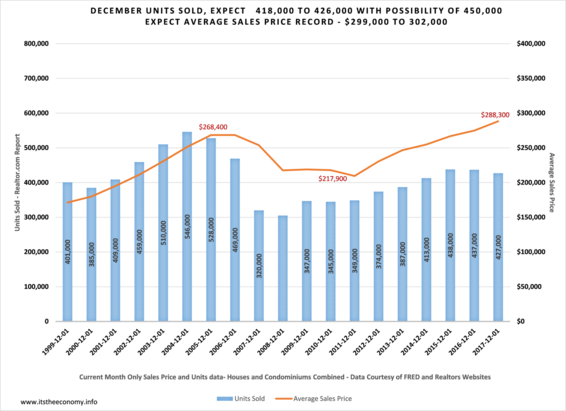