It used to be good when we had a seasonally adjusted (SA) FTU under 300,000 claims.  This week we recorded our eighteenth week with the non-seasonally adjusted (NSA) first-time unemployment claims (FTU) level under 200,000 claims. This has only happened during 1967 and 2018.We also saw the NSA Continuing Claims (CC) level drop to 1.461 Million claims and the Covered Insured Unemployment Rate (IUR) drop to 1.01%. The only time that the IUR has been recorded lower was during October of 2017. What was recorded and what was reported this week?

The Seasonally Adjusted FTU level was reported at 208,000 claims. It used to be headline news when the SA FTU value was under 300,000 claims. We had back to back weeks earlier this year when the SA FTU were under 200,000. This week the SA FTU could have been reported as low as 203,000 or as high as 250,000. It is important to recognize that some in the media will comment that the SA FTU is not better than it was last year - the thing is that we have 2 million more covered insured than we had last year at this time. Two million more workers with no more seasonally adjusted first-time unemployment claims. The seasonally adjusted first-time claims level has been under 300,000 since March 7, 2015. When the revisions to the FTU data was last performed (March of 2019) the September 2, 2017 SA FTU was revised from 293,000 to 300,000. This revision was done without revising the "final" NSA FTU value of 250,627. Will there be a celebration when we hit the 5-year anniversary of the SA FTU under 300,000?

The Seasonally Adjusted CC level was reported at 1,661,000 claims - 200,000 claims higher than the NSA CC level. This could have been reported as low as 1.650 million claims. Either way, the Seasonally adjusted CC streak that started April 1, 2017 is still intact.

The weekly unemployment claims report is the most "current" of the regular reports on unemployment or employment that we receive. The Jobs report data is released on the first of the month after being collected on the 12th of the prior month. The Jolts report is released one week and one month behind the jobs report. This month we received the July JOLTS Job Opening and Labor Turnover Survey data and the August Employment Situation Data.  The NSA CC level and the NSA IUR level is expected to coast lower from this week's level until the first week of October, even as the NSA FTU level may climb a little.

Do not succumb to the "we have more job openings than unemployed workers" gibberish. The JOLTS job openings data is comparable to, not identical to, the CES Current Employment Statistics data on workers and wages. The official U-3 unemployment level comes from the CPS Current Population Survey on jobs and unemployment. They have different sample sizes and are measuring different economic measures. The CPS and CES data have been seriously out of whack this year. "Out of whack" is a polite way of saying FUBAR which is a polite way of saying....

Watch the Multiple Job Holder Levels in the Employment Situation Reports through the end of the year. The best form of unemployment insurance is a second job. We normally hit peak MJH during November or December as employers hire more employees for the Christmas Holiday business crush. People who lose one of their multiple jobs still has a job and does not qualify for unemployment benefits. We are also seeing an elevated level of dual part-time job workers. We had the most August  FT PT jobs workers and  the second most August PT PT workers with 4.581 million FT PT workers and 1.957 million PT PT workers, respectively.

How low can these values fall? It was during 2015 that there was a minor uptick in the NSA FTU level before the traditional low week of the year. There will be variations from year to year based on how the calendar fall and what the hurricane season is like that year. We just have to watch the peaks and the troughs. Eventually the NSA FTU level and the NSA CC level may be higher than it was the prior year simply due to record levels of workers being covered by unemployment insurance benefits. We have had eighteen weeks with the NSA level under 200,000 only during 1967 and 2018, and now 2019.The IUR will give us some insight if that increases then there may be a change afoot. 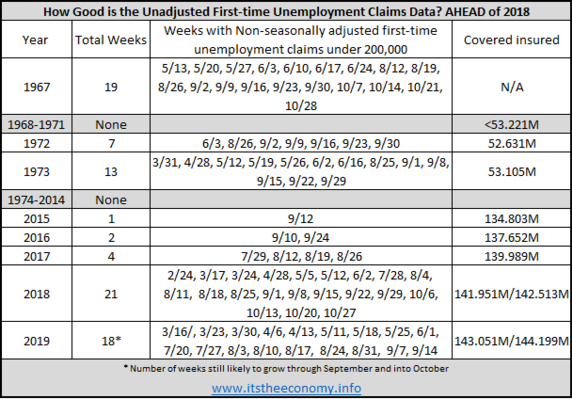 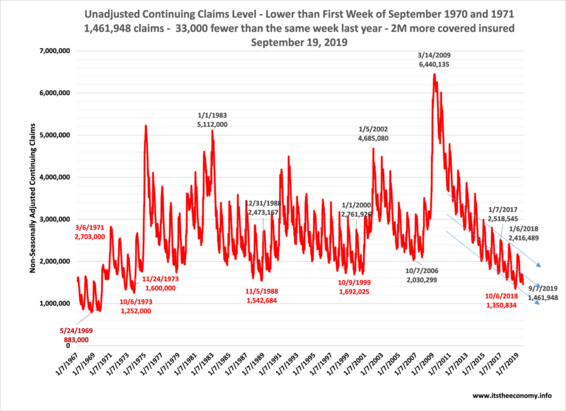 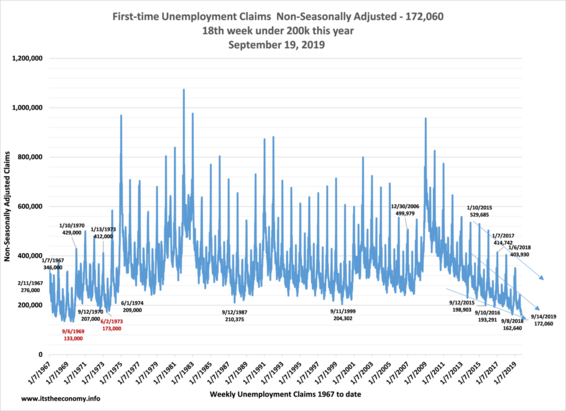 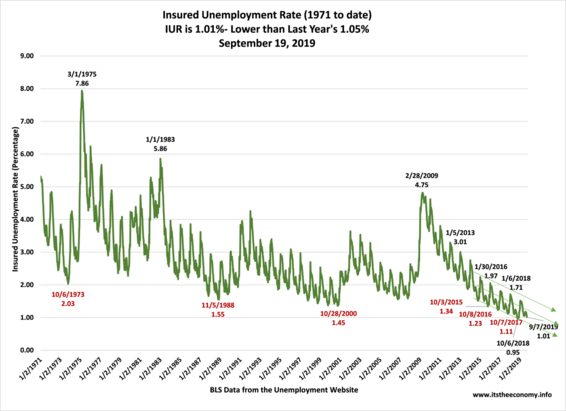