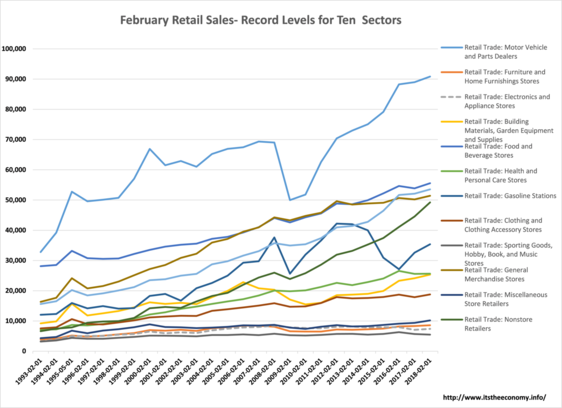 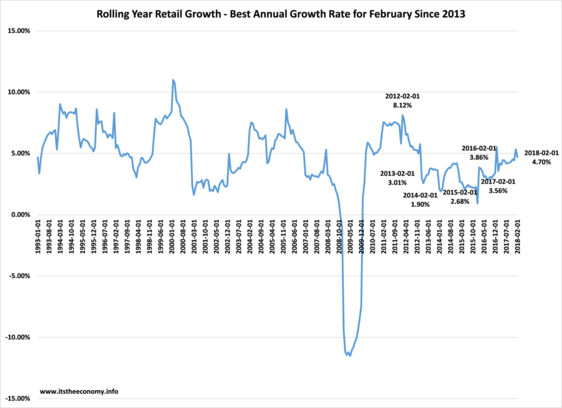 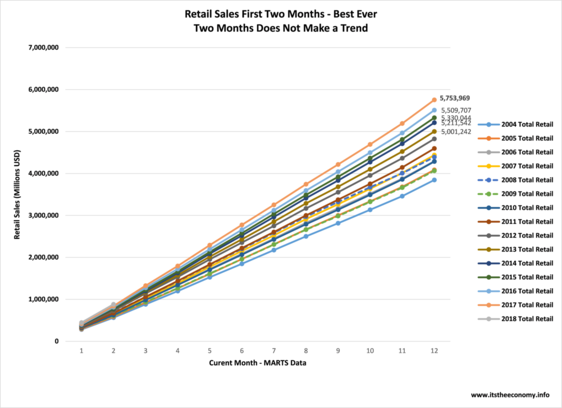 When an Up Report is Recorded is  Reported as being Down, Watch Out.

There have been those who have been claiming that we are in a Retail Ice Age. The Retail Ice Age is now a Retail Renaissance. Last year was the best total retail sales year ever. January was the "Best January Total Retail Month Ever." WE have seen a steady increase in retail sales since January 2016. There are a number of ways to examine the data. The data that is released are both non-seasonally adjusted (NSA) MARTS retail sales and the seasonally adjusted (SA) MARTS data. The seasonal factors used to convert the recorded NSA data to the reported SA data change by category, month, and year. This column wrote an February MARTS forecast article that projected year over year February growth for all sectors except the Electronics and Appliance sector. There are rolling year data for the past twelve months and current year data.The same article projected that there would be a month to month decline in NSA Sporting Goods and Hobby sales and that there would be month to month improvement in  Motor Vehicle and Parts (MVP,) Clothing and Clothing Accessories (CCA,) and Miscellaneous Store Retail (MSR) sales. The annual trends for month to month sales showed that the other sectors could go either way. The main question that was posed in the forecast article was how much growth can we expect to see this year? Remember that the data that we receive this month is the advance data for February, the Preliminary Data for January and the final data for December.  What happened?

Month to month Improvement in five sectors, including General Merchandise, Clothing, and Motor Vehicle Sales. You may not have heard this elsewhere as the seasonally adjusted data for Vehicle Sales and General Merchandise sales were reported as falling. The month to month data was a little weaker than expected in most sectors, other than the General Merchandise and Food and Drinking Places data. The Non-store retail data did not fall as much as it did last February, so this was a net gain by comparison. A similar scenario was present in the Sporting good and Hobby sector. While there was a decline from January to February of this year, it was significantly smaller than February 2017. Although the drops in the other sectors were anticipated, they were slightly more than anticipated.

February to February Growth was present in all sectors except Sporting Goods and Hobby.  Yes, there was growth from February 2017 to February 2018 in Electronics and Appliances, the laggard of the Retail Renaissance.  The largest gains were in gasoline sales, miscellaneous store sales and non-store retail (NSR.) Yes, month to month decline in NSR data can coexist with same month increases between 2017 and 2018.

Current Year data. The current year data does not really provide much insight with just two data points, the preliminary January data and the advance February data. If you look closely at the stacked line graph of the current year data the first two points of data are above where they were last year, and every year prior.  Two points form a line, three a trend. The rolling year data is up from last years 3.56% to 4.70%. If we can maintain this level of growth through the year we could hit 6 trillion dollars in total retail sales by the end of the year.