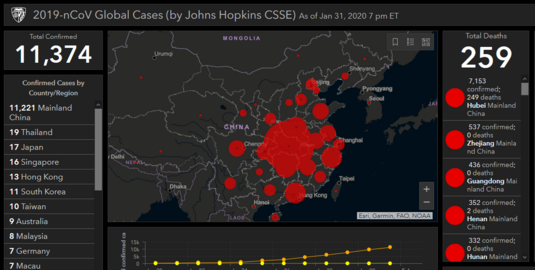 There were  many, many things in the news this week: Coronavirus, Impeachment, and a Stock Market Slide. We also saw the release of some strong New Home Sales data, excellent, historic weekly unemployment claims data, and some better than expected (per GDP Now) Gross Domestic Product data.

(Jan. 29)  We had great, record, Retail Sales during the fourth quarter of 2019. We had strong new construction data last quarter and strong new home sales data last quarter.   "Fourth Quarter GDP Forecast: 3%" was expecting a big annualized GDP pop. It was also expected to pop compared to fourth quarter of 2018 while we were in the Schumer Shutdown.

(Jan. 30) We did not get the pop that was expected from the Gross Private Domestic Investment Component of GDP.  The Annualized GDP came in at 2.1%. The Same Quarter GDP grew by 2.3%. The end of the year data was also 2.3%. "Fourth Quarter GDP Finishes 2019 at 2.3%"  looks at the Personal Consumption Expenditure data, the Gross Private Domestic Investment data, as well as the Import and Export data and the Government Consumption Expenditure data.

(Jan. 30) The Fourth Quarter GDP data was released at 8:30 AM EST. This was the same date and time as the release of the Weekly unemployment claims data. We have had a  record 255 consecutive weeks where the seasonally adjusted first-time claims data has been reported under 300,000 claims. We have also had 145 consecutive weeks with the seasonally adjusted continuing claims data being reported under 2 million. Read "Unemployment Claims Drop, Again" for more details. This was virtually ignored on Thursday.

The news regarding the Coronavirus is interesting. We have had 11,374 cases identified worldwide. China accounts for 11,221 of the cases, or 98.65% of the cases. There are seven (7) cases in the United states. There have been 259 deaths related to Coronavirus. All of the deaths have been in China. There were 249 deaths in one region of China alone. There have been no deaths outside of China. There are none in the United States. The graphic in this article is from John Hopkins University. The data and graphic can be found here. This virus is new. The sell-off on Friday was partially due to the Coronavirus reporting. It was also probably in part due to it being the end of the week and the end of the month. It may have been because the 10-year bond yield dropped as people took a "flight to safety."  This virus is virtually contained to China right now. Hopefully cooler heads will prevail.