This week was a fairly busy week for economic data. We received the December JOLTS Job Opening Report, the January CPI Inflation Report, The January MARTS Retail Report, and of course the weekly unemployment claims report. There was also time for more analysis of the January Jobs Report.

(Feb. 11) The week started where last week left off. Last week we received the January Jobs Report which reported fewer workers being added than they could have reported had they used last year's overall seasonal factor for converting the non-seasonally adjusted data to the reported seasonally adjusted data. The Current Employment Statistics (CES) worker data also includes data on wages and hours worked. We had a record level of January workers earning record levels of wages. The article "Record January Worker and Wages Data" examines the data for the Month of January versus January 2019. It also examines the changes in workers under President Trump.

(Feb. 11) There was considerable discussion regarding comparing former President Obama's accomplishments regarding jobs creation compared to former  Presidents George HW Bush, George W Bush, and Clinton. The original meme ignored former  President Reagan. This comparison was made around month 80- of the Obama administration, and 96 months under the other Presidents, and the changes that happen during January. "Five Presidents at 36 Months: Momentum" compares the accomplishments of President Trump against the most recent two term Presidents. There is even some "first 36 month" and "final 36 month" comparisons for President Trump with former President Obama. Some feel it is unfair to compare Obama's first 36 months with the other Presidents. They are cherry-picking data because the former President's first 36 months in office were week and they only want to talk about the jobs gains after the job losses stopped.

(Feb. 13) Thursday is still weekly unemployment claims day. This was the 257th consecutive week where the seasonally adjusted first-time claims data was reported under 300,000 claims. This was the 147th consecutive week where we had the seasonally adjusted continuing claims level reported under 2.0 million claims. The Insured unemployment rate was the lowest ever for the first week of February. It was also the lowest First-time Issuance Rate for the second week of February. "First-time Claims Reported Under 300,000: Week 257"  reported on the data that the Legacy Media loves to ignore.

(Feb. 13) The CPI Inflation data was released at exactly the same time as the Weekly Claims data. We received information similar to what we have been receiving for years: Shelter inflation over 3%, Commodity deflation, Service Inflation, Health Insurance Inflation. Energy spiked this month. We could see a decline next month. "Jan. CPI: Transitory Pop to 2.54%" explains how this inflation rate is comparable to what was recorded during January 2017.

(Feb. 14) The January MARTS Retail report was better than was reported in the Legacy Media. "Jan. Retail Sales: 21st Consecutive $500 billion month" explains how the Current Year sales are starting off stronger than last year. It explains that this was our best seasonally adjusted retail sales month ever. It also reported on how the non-seasonally adjusted data fell to levels that were expected and remained our best January ever.

This week we had the New Hampshire Democrat Primary. Joe Biden came in fifth place. We also had information regarding FISAgate. The coronavirus, COVID-19, or the Wuhan Virus, is still mainly contained to China. The data can be found here.

The cases are spreading. It is causing problems with world travelers. Pay attention. It is cold and flu season. If only the media would dig into the economic data as often as they dig into the Coronavirus data. 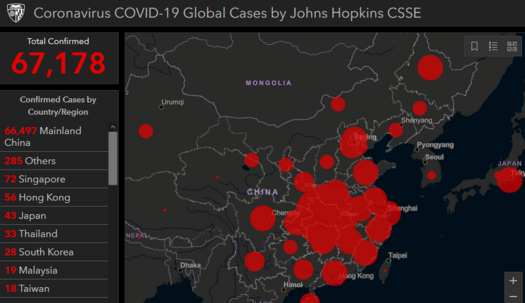